How to escape from a sinking car | Torque
Loading posts...
0 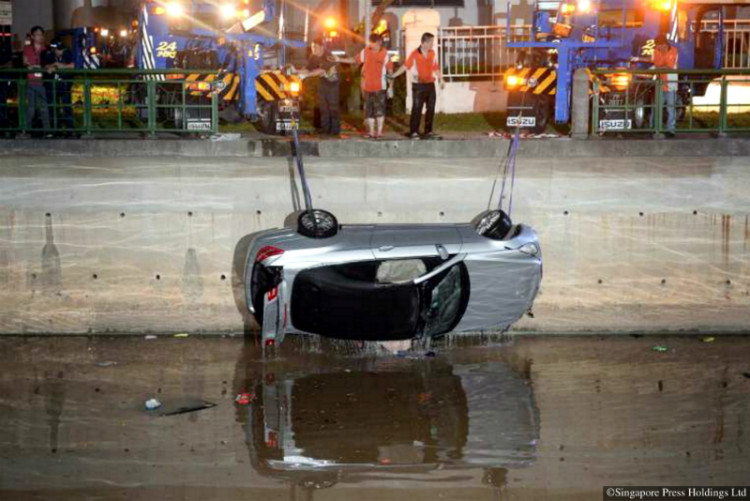 If you are trapped in a car underwater, your best course of action is to keep calm and wait for water to fill the car, said commercial diving expert Edwin Yeo.

Once this happens, said Mr Yeo, who is chief executive of engineering and technology firm Opcon, the pressure inside and outside the car equalises and you can open the door and make your escape.

If water is still flooding into the car but has not filled it, the water outside will put pressure on the door and make it virtually impossible to open.

How do you know when the pressure has been equalised? “If it’s not equalised, you won’t be able to open the door,” Mr Yeo said.

Mr Richard Tan, president of the Singapore Life Saving Society, said it is also possible to escape before the car fills up with water if one has the right tools on hand. A small hammer-like tool, known as a window breaker, can be used to smash through the windscreen. “Anything hard and sharp that can concentrate force would be good to use in such a situation,” he said.

“Try to keep calm and not panic, and make whatever air you have last longer. You don’t know how long you will take to get out.” However, Mr Yeo said that without the right equipment and technique, breaking the window might prove too difficult for most people.

A 2010 study from the United States suggests that unfastening seat belts and winding down the windows before the car is fully submerged is perhaps the best course of action, as it is less risky than waiting for the car to fill up with water.

This is theoretically possible, said Assistant Professor Roland Bouffanais, who is with the Singapore University of Technology and Design’s engineering product development “pillar”. He said: “Most modern cars have fairly good waterproofing of their electric and electronic systems in order to normally operate under heavy thunderstorms… It is therefore very likely that the windows could be opened while the water is penetrating the car.”

He added: “However, at some point, multiple possible short circuits will render the embedded electronics (in the car doors) completely inoperative.”