AS electric cars slowly but surely slide into mainstream consciousness, BMW is making sure other manufacturers don’t steal their slice of the pie amid burgeoning competition.

To wit, the German automaker is embarking on an aggressive plan which will see electric vehicles make up nearly a quarter of its global sales within the next six years.

The future of BMW is electric, and Dr Andreas Aumann is in prime position to keep the company pointed down that road.

As vice-president of product management, eMobility at sub-brand BMW i, Dr Aumann is keenly aware of what electrification means for BMW as a whole.

Ever since taking his current position in 2018, the division – responsible for the BMW i3/i3s and i8 – has grown to become one of the most important in the group, showcasing multiple electrified and connected models.

Some of the models the i division has shown off are the i4, a four-door coupe scheduled to be launched in 2021, and the iX3, a battery-electric SUV based on the current X3 and tipped for a 2020 release.

And it’s not stopping there. The Vision iNext, which Dr Aumann is particularly proud of, is a shark-like, highly autonomous car that looks every bit the futuristic car that moviemakers dream up.

But it’s not the stuff of fiction: From 2021, the iNext will enter series production at BMW’s Dingolfing plant, becoming a rolling technological flagship that encompasses all of the company’s most advanced tech.

With visions of the future brimming in his head, Dr Aumann tells Torque why “technology openness” is so important, and what the recent partnership with Jaguar Land Rover means for BMW.

How does BMW feel about the future of electrification, from an industry and a brand perspective? How is this going?

We strongly believe the future is electric. We have probably the broadest portfolio of electrified vehicles in the premium segment. By the end of the year, customers will have a choice among 12 electrified BMW vehicles.

As first movers, we started with the BMW i3 in 2013 and the i8 in 2014. Since then, we have continued to bring new electrified models to the market, particularly plug-in hybrids.

By 2025, we expect that our share (of electric vehicles) will be between 15 and 25 percent of our global sales volume, and out of the 25 electrified models in the group, we expect at least 12 will be battery electric.

Could you share a little bit more about the Vision iNext?

The purpose of the iNext is to put all our number one innovations into one car. It will have up to Level 3 autonomy on highways – up to 130km/h – and it will be fully connected. Of course, it’s electric with a range of more than 600km. And it will come with all the latest services.

Do you agree that going electric helps BMW’s image, particularly for the younger customers who want a more eco-conscious form of motoring?

Going electric early with the i3 and i8 has helped our brand image a lot in terms of innovation. Having the broadest portfolio of electrified vehicles in the premium auto industry does so, too. Looking at the future, electrification is going to become more and more mainstream. So electrification per se will be less differentiating from a brand perspective, at least at some point.

What is going to continue to be a differentiator is emotional, desirable and innovative products. And those will continue to drive the brand.

EMOTIONAL, DESIRABLE AND INNOVATIVE PRODUCTS WILL CONTINUE TO DRIVE THE BRAND. 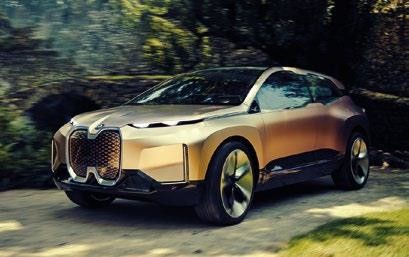 When it enters production in 2021, the Vision iNext will be a technological tour-de-force for BMW.

What about alternative fuels like hydrogen? Does BMW see a future in these fuels?

At BMW, we believe in technology openness. So yes, the future is electric, but is it going to be only electric? That is still to be seen. Further optimisation of our ICE vehicles can still deliver quite good performance in terms of CO2 and emissions reduction.

Hydrogen is a very interesting technology, because it is clean when it comes to local emissions. But infrastructure to store hydrogen is currently rather difficult and expensive to build up. And we’re only talking about the refuelling infrastructure; there is still the production chain of hydrogen.

This is why, under the umbrella of technology openness, we are also pursuing hydrogen in cooperation with Toyota. But we see it as a bit further out into the future, compared to electrification.

What do you think is the next big leap forward for electric cars?

I think the next big leap is going to be innovation in the ACES (Autonomous, Connected, Electric, Services) fields. At BMW, ACES are a key part of our corporate strategy and in 2021, the BMW iNext will be the one car that combines all the ACES technologies.

Regarding the alliance between BMW and Jaguar Land Rover – what areas will both companies see benefits in?

The automotive industry is undergoing a massive, steep transformation and this is also expanding the scope of our development activities. It therefore makes sense to cooperate.

One area of cooperation is the ‘E’ in ACES: electrification. Here, we cooperate with Jaguar.

What we want to do is take advantage of cost efficiencies in the shared development of future drivetrains, production planning costs and also economies of scale in procurement.

These are the three areas that will help us. And, again, the cooperation enables technology openness: if we want to be technologically open, we need to cooperate.

So what car do you personally drive now?

I drive an i3s to work. It’s really cool, but I’m very much looking forward to replacing the i3s with an iNext as soon as I can.

The i3s is great as a city car. I live in downtown Munich in a very old house with no garage so I cannot charge the car at home. I charge it at work.

I spend roughly an hour a day in the car and the battery’s never below 90 percent because the car so efficient in heavy traffic. It’s really great.