These large limos may be plus-sized in terms of physical dimensions and luxury features, however they’re anything but slow. 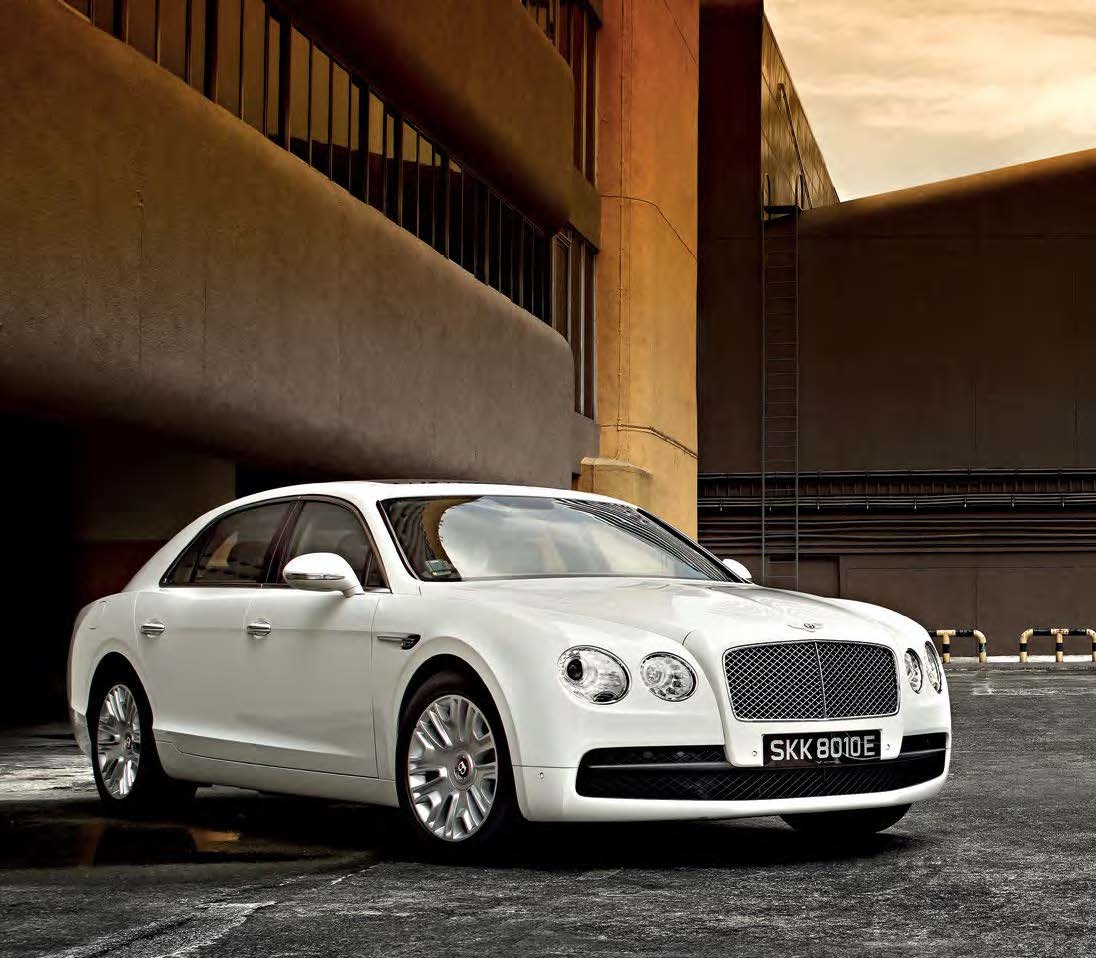 BIG luxury saloons are commonly known as “barges” for good reason – they usually measure over 5m long and weigh in the region of 2 tonnes. Traditionally, this meant they are also slow and lumbering, because they need equally huge engines to haul them around. As even the most un-studied physics student will tell you, weight is the biggest enemy of speed. However, with the advent of modern turbocharged engines and lightweight materials (highstrength steel, aluminium and even composites), the drawbacks of owning a big saloon have been largely negated, as expertly demonstrated by the Audi A8 and Bentley Flying Spur here. 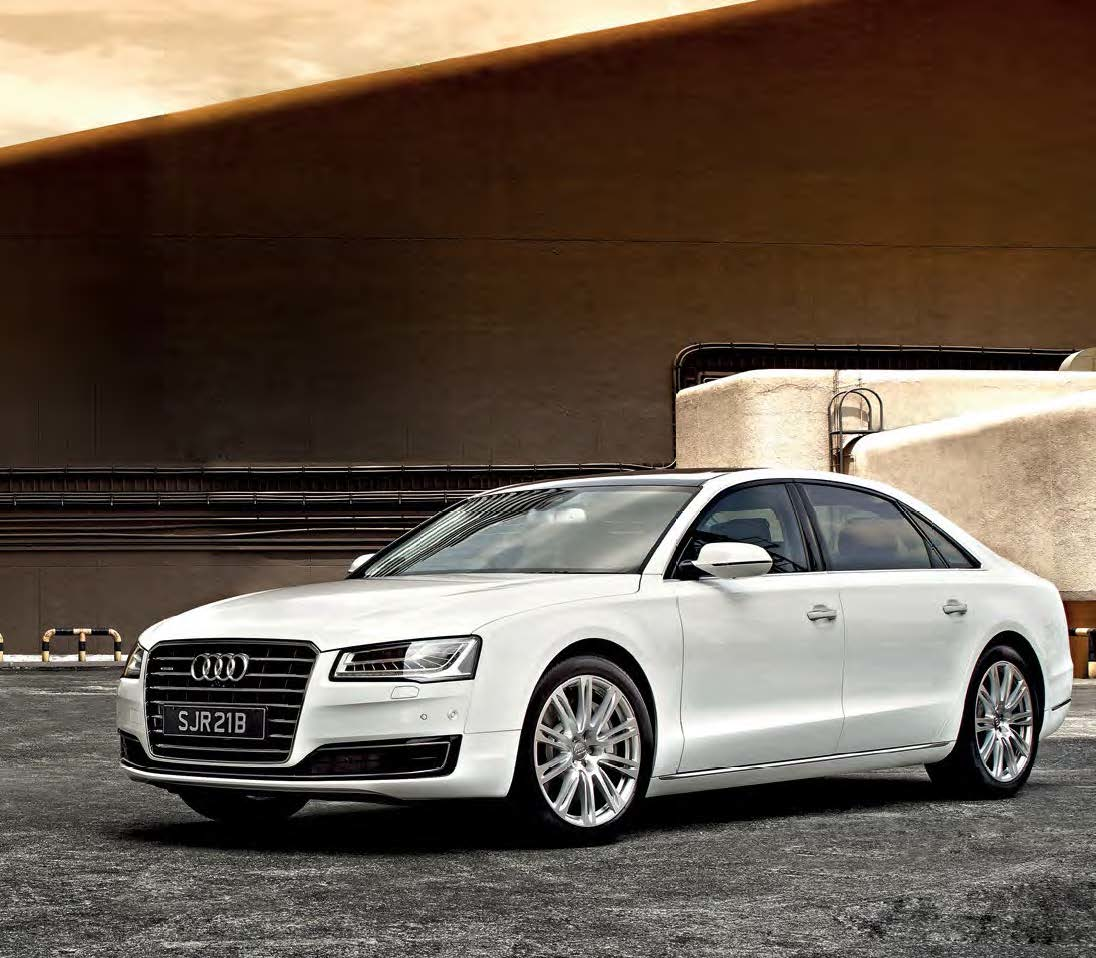 In terms of chassis construction, cabin fittings and personality, the two distant cousins (both marques are owned by the Volkswagen Group) couldn’t be more diff erent. But they share a common heart: a 4-litre twin-turbo V8 mated to an 8-speed automatic gearbox. However, as we said, that’s where the similarities end. In the Audi, the V8 engine develops 435bhp. In the Bentley, the motor develops an even mightier 500bhp. The Audi’s 65bhp deficit might suggest it’s the slower car, but in fact it completes the zero-to- 100km/h dash in 4.6 seconds, which is 0.6 of a second quicker than the Bentley. 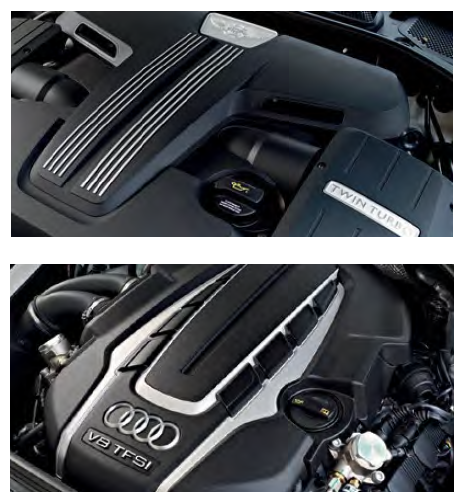 The reason for the A8’s greater off -the-line alacrity is down to how it’s composed largely of aluminium (13 diff erent types, apparently). As a result, the Audi model in this guise weighs 1975kg, which is remarkable considering it’s nearly 5.3m long, 2m wide and has an all-wheeldrive system. The Flying Spur shares roughly the same dimensions as the A8, but because it’s made of more conventional materials (that is, steel), it weighs about 500kg more than the Audi. Still, if you were to bury the throttle into the deep-pile wool carpet, it would take a cynical person indeed to call the Flying Spur slow.

But while the Bentley does well in the straight-line acceleration stakes, it comes a little unstuck once the road gets twistier, no thanks to its kerb weight that’s approaching 2.5 tonnes. Even with the adaptive air-filled dampers set to their firmest setting, there’s still a good deal of wallow to the Flying Spur’s cornering attitude. And with its slow steering rack and large steering wheel, driving it hard involves plenty of flailing elbows. If you’re a fan of the firstgeneration Flying Spur, you’ll find this lack of agility lamentable, though this is in line with how Bentley is pitching the secondgeneration model as a junior Mulsanne (the marque’s flagship limo). This is in contrast to its predecessor, which could be thought of as a four-door Continental GT. 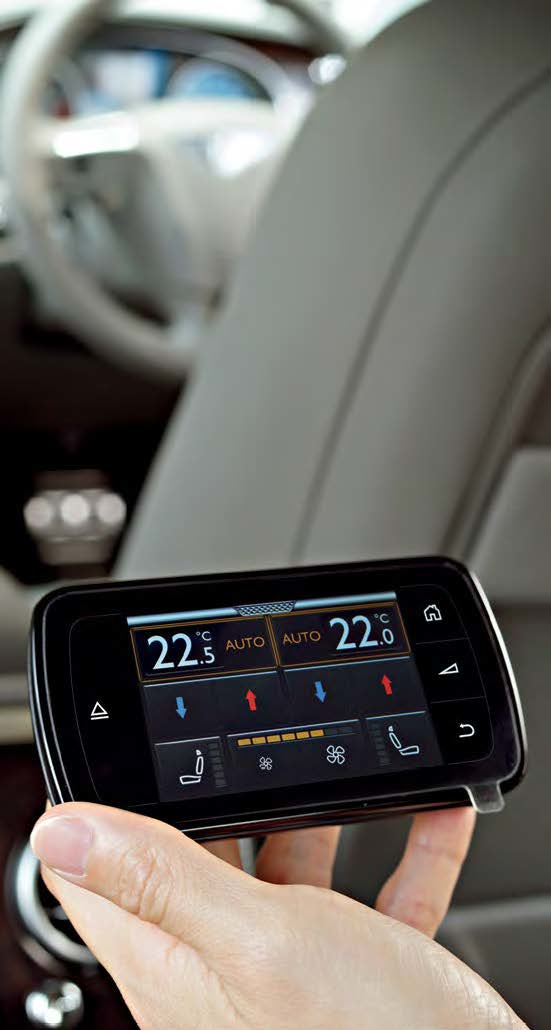 A mini-tablet allows rear passengers in the Bentley to control various functions remotely.

Unlike the Bentley, the Audi is surprisingly competent when driven hard, with its relatively low weight and more sportily tuned suspension being big contributors to its finesse. Perhaps the biggest contributor to the A8’s handling ability, though, is the stiff ness of its chassis. While we’re not able to independently validate Audi’s torsional rigidity claim, we can safely say that the A8 is pretty darn stiff . It gamely handles rapid directional changes and tackles long, sweeping corners with relative ease. 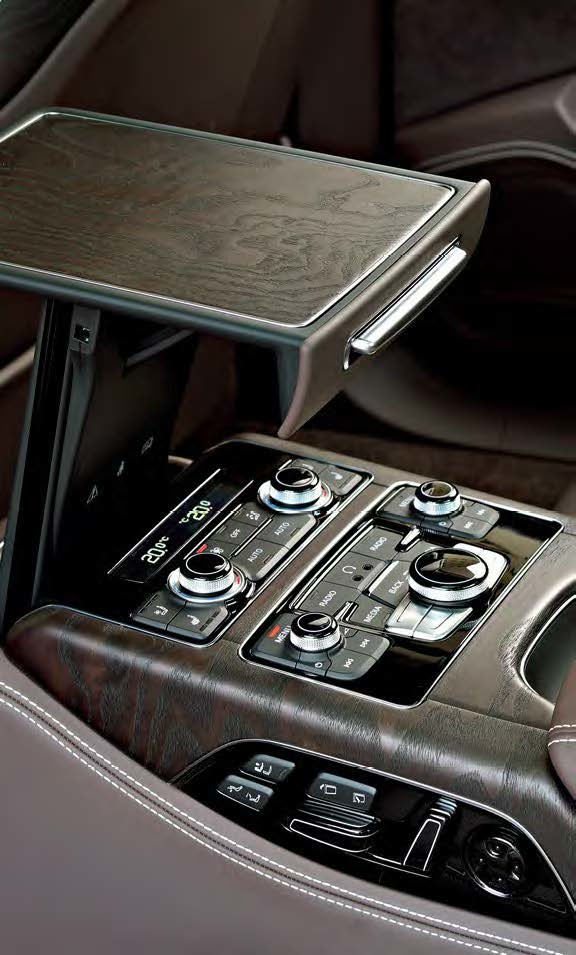 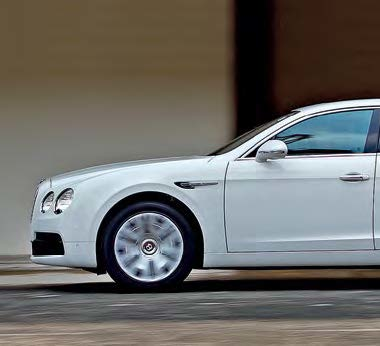 That said, treat the A8 like a hot hatch and you’ll probably find yourself wrapped around a nearby tree. But for what it’s worth, Audi’s largest saloon is a remarkably capable machine. Of course, there are some who point out that buying a big limo for how well it handles is like buying a supercar and complaining about the lack of boot space. And these people have a point – the task of driving a limo is best left to a chauff eur. Luxury saloons should be about, well, luxury, and that’s where the Flying Spur scores big. 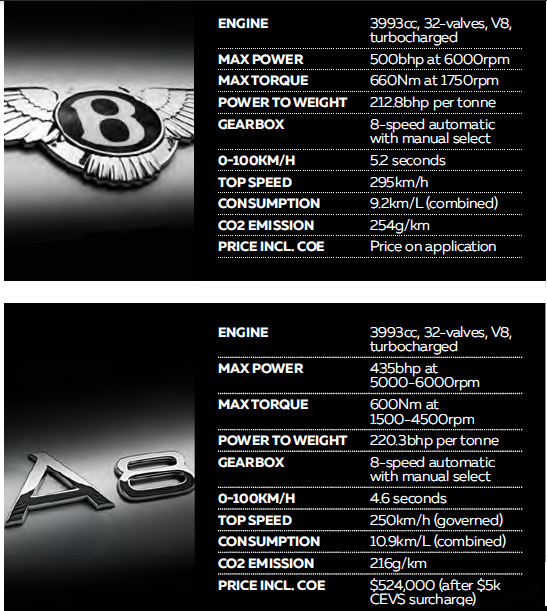 That’s not to say the Audi is wanting in that department. Its cabin is swaddled in acres of fine leather and textured wood. Build quality is, as you’d expect, stratospheric. Even the smallest details have received attention, such as the hinges for the central armrest (which seem hewn out of a solid billet of metal) and the grooved metal strip that surrounds the upper portion of the rear door frames. It’s pretty much the same story with the Bentley, though unlike the more “technical” Audi, the Flying Spur’s cabin is dripping with old-world charm, like a rolling version of an ancient English manor.

There’s an almost impossible depth to the lacquer of the wood panelling and the flawlessness of the leather upholstery, along with the marque’s signature knurled motif adorning certain knobs and surfaces. And oh, yes, each Flying Spur comes with a “free” Breitling clock on the dashboard. Given that, it should go without saying that the A8 and Flying Spur are bristling with nifty equipment – satellite navigation, electrically operated boot lids and soft-close doors are just a few of their many goodies. 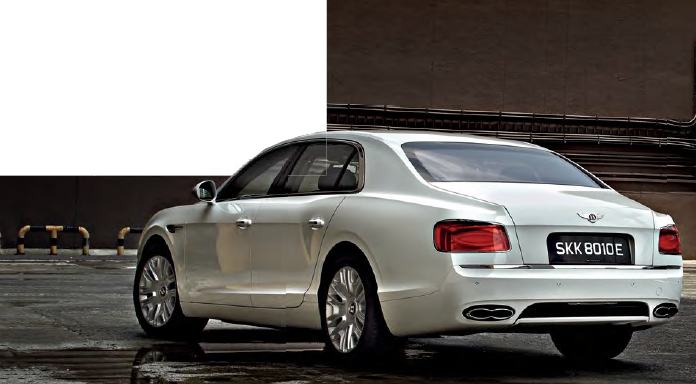 On the surface of things, it seems like the Bentley is missing out on the Audi’s rear-seat entertainment screens and foldout table (the latter is housed in the rear centre console), but don’t forget that the Flying Spur has access to the marque’s Mulliner customisation division, where your every wish (provided it’s legal) is their command, in spite of it being the “entry-level” Bentley. 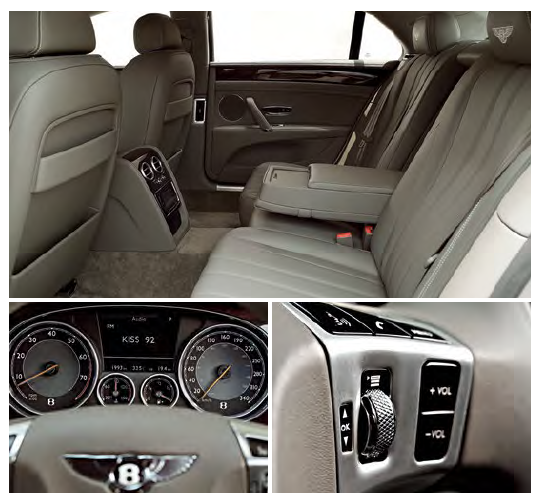 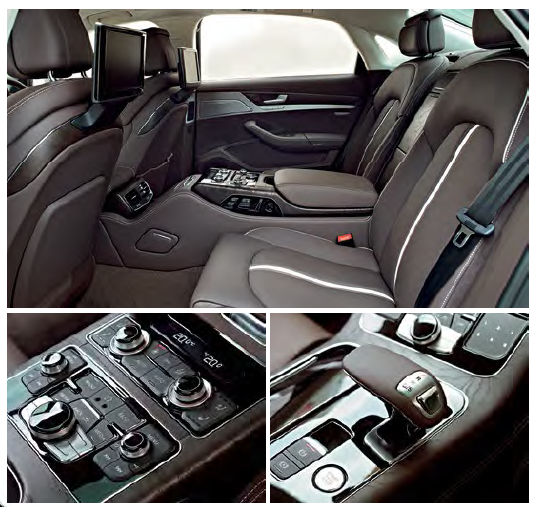 Given the premium positioning of these cars, it’s fitting that the builders of the Flying Spur and A8 sweat the small stuff.

For all that I’ve said so far, and where it really counts, the A8 and Flying Spur share something in common: Both saloons have plenty of aural and mechanical refinement. Whether it’s the Audi or Bentley, it’s like riding around in a bubble of silence, far from the madding crowd and clamour of the world at large. This makes them just the sort of car a busy potentate needs when commuting between meetings. At this point, it should be clear that while modern limos may have moved the game forward significantly for the breed, they’re still as luxurious (and luxuriously appointed) as ever, with one key diff erence: They’re a lot quicker. Good thing, too, because you know what they say: Time is money. 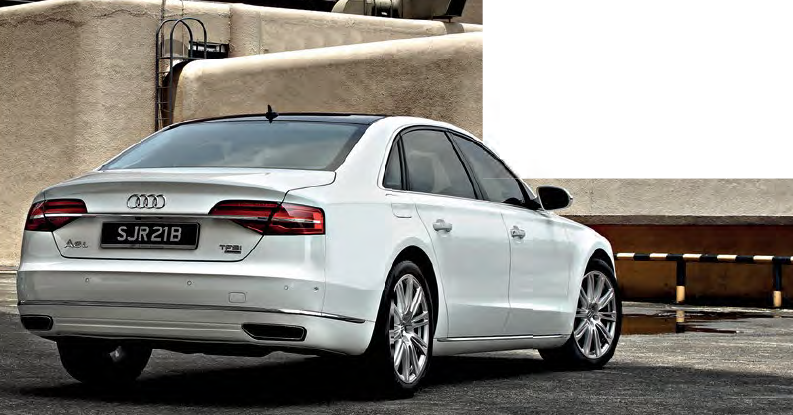