An afternoon out at the brand new BMW Driving Center saw this young writer learn the finer points of driving on slippery surfaces. 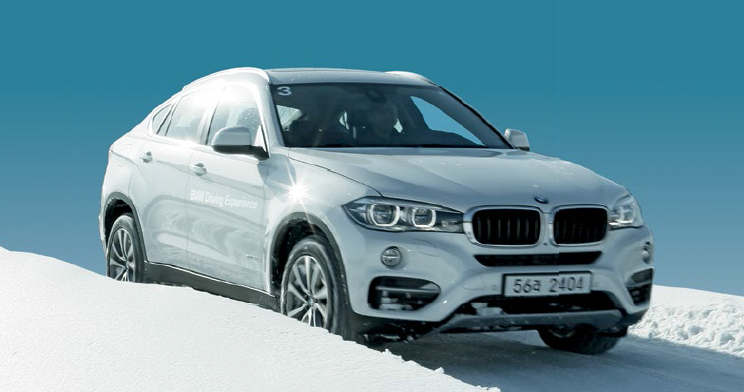 LAUNCHING into aggressive powerslides, with powdery snow flying in my wake, were the dramatic images that came to my mind with this assignment. I’m a sun-baked tropical who has had past dalliances with snow, but zilch experience driving on it. The reality of winter driving, though, as I discovered during a recent outing to the new US$75.5 million ($100.6 million) BMW Driving Center in Incheon, South Korea, involved being bundled up in a thick down jacket while “tip-toeing” the steering and accelerator during a frigid winter.

But this is serious business. With temperatures plummeting all the way to minus 20 deg C, maintaining control behind the wheel is remarkably diffi cult, especially when snow and ice on the road diminish traction, and increase the possibility of your car skidding. Driving on ice-glazed surfaces isn’t to be taken lightly, and the key purpose of the basic ice-driving course I enrolled in was to give me the necessary hands-on knowledge on how to pilot a car down glassy roads. 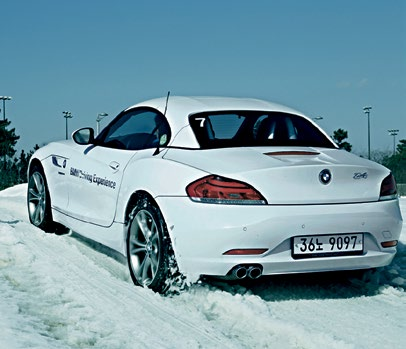 Even shod with grippy winter tyres, traction is scarce when driving on snow and ice.

But most interesting was experiencing BMW’s electronic traction aids in action. Of course, I understood how they work in theory, but being exposed to them actually working to keep me on the straight and narrow was a real eye-opener. With the systems on, the electronics helped modulate the brakes and throttle. But with them off , I was left out in the cold. In normal circumstances, I wouldn’t turn the systems off , but out on this private snow track, I had everything switched off , all the better to star in my own “winter sonata”. The reality, however, was a little diff erent.

In the same way the clumsy among us can wear spiked boots and still slip on icy pavements, winter tyres don’t guarantee grip. The only real insurance is knowing how to react in such situations. Learning how to do so was fun, especially in a rear-wheeldrive car like the 528i. I also drove an all-wheel-drive X5 during an earlier session, but it wasn’t as nice to dance with as the 528i saloon. Being the snow-driving virgin that I was, executing the instructions relayed to me through a walkie-talkie by my instructor (a former racecar driver who goes by the unassuming name of Instructor Choi) proved a lot trickier than he demonstrated.

Performing pitchperfect powerslides is a lot harder than it looks, the writer discovered.

“Use your basic steering techniques [hands at the 3 and 9 o’clock points], apply power and turn the wheel in the direction you want to go,” he’d say, while coaxing the car into oversteer. “Now, counter-steer in the opposite direction, as you feel the car slide out, and apply power accordingly.” Easier said than done. On my first slalom down an incline, my “dance” routine involved the following steps: powersliding the car (beaming as rally-driver mode kicked in), countersteering (while realising I carried too much speed and power) and sliding wide (embarrassment), then spinning out (horror). “Your counter-steering is good, but your throttle control is a bit too slow,” said Instructor Choi after that first run.

“The trick is to look ahead at where you want to go, and the direction to get there,” he added. It sounded easy in theory, but it was only in practice that I truly appreciated the degree of skill involved. Over the next couple of runs, I found it easier to counter-steer and balance the throttle at the same time. From panic-mashing the throttle, I was eventually able to modulate it better and put in a decent run around the course. As for the “K-drama” part of the experience, I found myself starring in a frozen rescue. My wannabe-rally-driver exuberance in returning to the line for another run saw me stuck in a wall of slushy snow. It was a premature end to my outing on ice, as I waited to be towed out while my mates drifted past.