Dunlop’s new performance-oriented rubber is great in both the wet and dry, but it has a hard ride.

IT has been about 10 years since we reviewed this tyre’s predecessor, the Dunlop Direzza DZ101, and plenty has changed – the first being how production of this tyre has shifted from Japan to Thailand. It’s also changed physically, with the new DZ102 having less of a V-shaped pattern to its tread. The biggest diff erence is how the new tyre has a five-block, four-groove design. Stiff belting is found under the tread, and the sidewalls are equally rigid, showing little deflection even when not inflated. In the 225/40 R18 size tested here, its weight comes in at 10.8kg, which is average.

The upside of that stiff ness is how the DZ102 inspires plenty of confidence – sharp at the helm, with decent steering feel. It’s also progressive at the limit, moving out in a predictable manner, and emitting a muted howl when approaching said limit, with no sudden breakaway. However, it does feel very waxy immediately after fitting, and only after a run-in period of about 200km did it feel more keyed to the road’s surface. On the highway, it has excellent straight-line feel, tracking straight and true without any nervousness despite having such sharp steering. That said, its rolling resistance is higher than average. 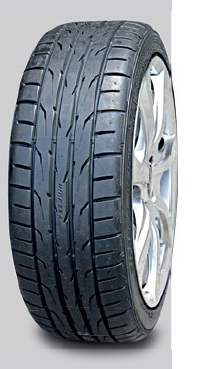 Against its predecessor, Dunlop’s new Direzza tyre is a quantum leap forward in terms of performance.

While that’s all well and good, the biggest improvement the DZ102 has made over its predecessor is how much better it performs in the wet. Grip levels are good, and while it does tend to understeer, it does so progressively. Even when conditions are truly sodden, the DZ102 stops well, teaming up nicely with the ABS to produce impressive stops. Unfortunately, the penalty for that sharp handling is a hard ride, with its stiff carcass and sidewalls exacting a toll on comfort when the road surface is less than glassy-smooth. While testing this tyre, I learned to dodge manhole covers and poorly patched tarmac.

Of course, if comfort, not outright handling, is more of a priority, you could lower tyre pressure a little. I found 30 to 32psi to be a good compromise. On the other hand, this tyre is surprisingly quiet, and while cruising at 70km/h, I measured the new Direzza’s noise output to be just 62.5dB – a significant improvement from before. While I was initially sceptical about the tyre and its claimed improvement, particularly given its newfound Thai origin, I’m glad to report it’s better than the DZ101. The DZ102 improves on its predecessor’s already excellent dry handling, and vastly betters it in wet conditions. It’s not the most comfortable tyre around, but makes up for this with its good aural refinement. As an added bonus, it’s also reasonably priced ($300 for the 225/40 R18 size I tested).