The Lexus RC F is a “samurai” taking on a “Teutonic knight” in the form of the BMW M4. Which one ultimately enthrals enthusiasts? 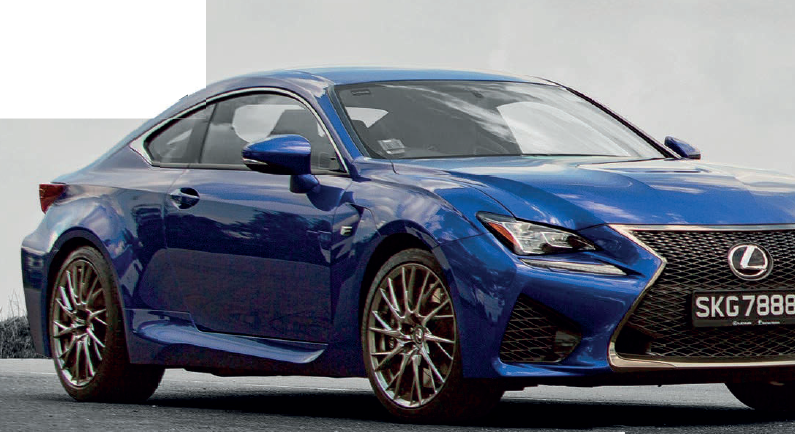 DURING medieval times, knights participated in jousting contests to hone and demonstrate their skills. This consisted of two knights on horseback armed with jousting sticks who would charge at each other, with the aim of unseating their opponent. The two coupes we’ve gathered here are a modern – and automotive – equivalent of two knights. Like their human counterparts from days of yore, each wears a distinctive suit of armour and carries its own unique array of weaponry. 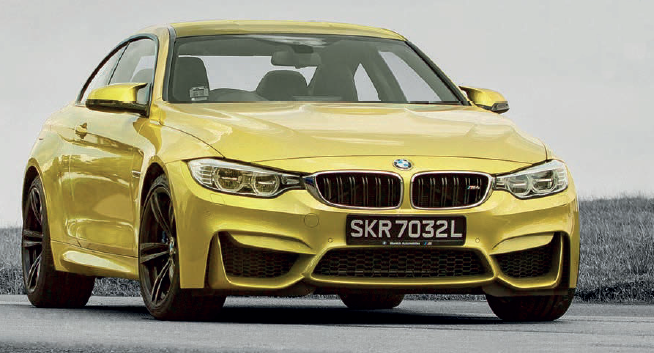 The rc f’s v8 has a wonderful burble, while the m4’s inline-6 is rorty at idle and sounds angry past 4000rpm.

Attempting to intimidate its rival using its looks alone is the RC F. The first proper coupe from Lexus is built on a chassis that is a hybrid of the GS and IS saloons. It looks more than aggressive – with that enormous front grille and sharply angled headlights, the car is downright pugnacious. And with “stacked” quad-exhausts and “3-D” tail-lamps, even the rear end looks threatening, too. Looking comparatively meeker is the BMW M4. Its trademark kidney grilles seem tiny compared to the RC F’s ginormous spindle number, but the M4’s sharply angled air intakes, bulging bonnet and chiselled flanks hint at this coupe’s athleticism. And while the M4’s rear end doesn’t look as sinister as the RC F’s, its carefully honed shape provides enough downforce without the need for a spoiler. The RC F, on the other hand, has an active rear spoiler that deploys at 80km/h.

The RC F’s cockpit is more cocoonlike, while the M4’s is more spacious and better suited for taller drivers.

Now, although the M4 is more aerodynamically advanced, its interior isn’t as modern as the RC F’s. The latter’s cockpit is like a fighter jet’s. The instrument panel is inspired by the LFA supercar, while the climate controls and map lights are touch-operated. To keep occupants secure and enhance their comfort, the sports seats offer even better lateral support than the ones in the M4, and they are ventilated, too. We like the fact that the RC F also has aluminium pedals with rubber inserts. They sure look sportier (and more expensive) than the regular pedals in the Bimmer. 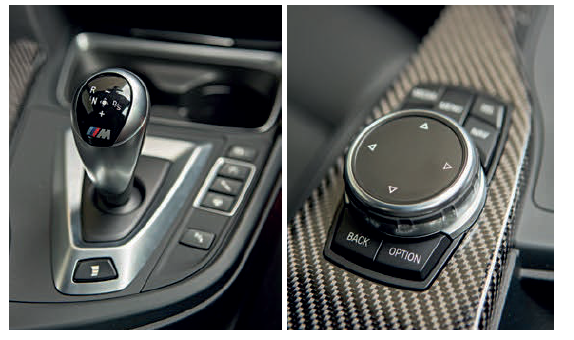 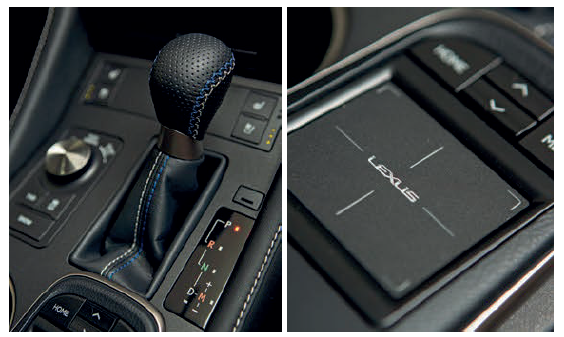 But when it comes to infotainment, the RC F’s Remote Touch Interface (RTI) is less intuitive than the M4’s iDrive system. The RTI, which now uses a touchpad instead of the previous mouse-like controller, is still not that accurate – you sometimes still end up selecting the wrong option. Despite the less-than-smooth infotainment experience, the overall build quality of the Lexus is even better than the M4’s. The plastics used in the former feel softer, and the Alcantara trim on the door panels and centre armrest is a nice touch, too. More significant, however, are the “weapons” lurking beneath the “armour” of these coupes. The RC F, our samurai in this story, packs a naturally aspirated 5-litre V8 motor that’s good for 470bhp, or 39bhp more than what the M4 can muster. Driving the rear wheels via an 8-speed automatic, the Lexus can hit 100km/h from a standstill in 4.5 seconds. 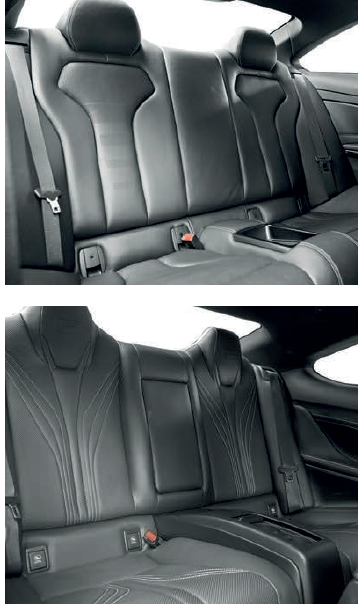 The RC F’s backseat is more compact than the M4’s (above, right), but the Lexus’ centrally placed cupholders mean it’s more practical for occupants.

The M4’s engine is smaller, but its output is nothing to scoff at. The twin-turbo 3-litre inline-6 might produce “only” 431bhp, but the 550Nm it churns out is 20Nm more than what the Lexus is capable of. And in terms of outright acceleration, the M4 leaves its rival in its wake with a century dash time of 4.1 seconds. Helping the rear-wheel-drive Bimmer accomplish this is its 7-speed dual-clutch gearbox, which swops cogs about as quickly as you can blink. The soundtrack accompanying each coupe’s performance is an aural delight. The RC F’s V8 has a wonderful burble and the exhaust is pleasingly throaty. True to Lexus’ reputation for refinement, however, the car’s voice isn’t as forthcoming as expected. Even when revved close to 6000rpm, it never becomes loud. 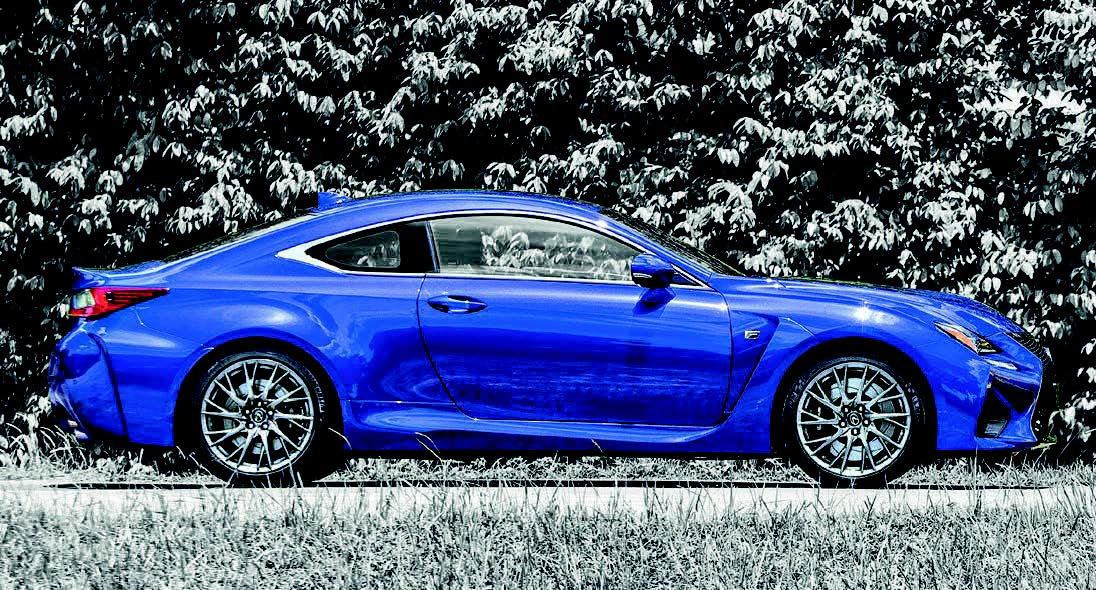 The m4’s resposiveness demands a more skilled pilot, whereas the rc f’s linearity is more driverfriendly.

The M4, on the other hand, is surprisingly emotive. Fire up the inline-6 and it awakens with a loud bark, before settling into a rorty idle. You’ll find that every throttle input also translates into deep growls. As the tachometer needle swings past 4000rpm, this Teutonic knight sounds like an angry beast intent on slaying its opponent. Not surprisingly, the M4’s power delivery is the more urgent one of the two. It always feels like it’s raring to go, and its turbocharged nature means it doesn’t have to be pushed very hard. Its turn-in is also keener than that of the Lexus, and it flows through corners with ease. Although the M4’s helm is as accurate as its rival’s, it does offer more feedback and makes it easier to position the car. 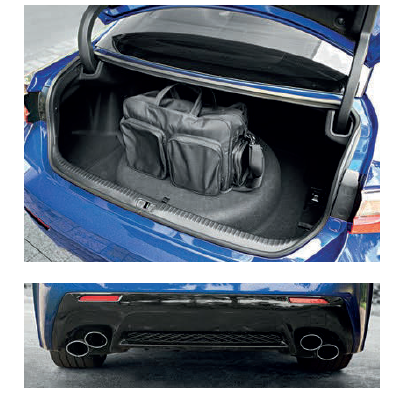 The RC F’s 365-litre boot isn’t as flexible as the M4’s, as the spare tyre takes up too much space.

What the Bimmer demands in return for its abilities, however, is a more skilled pilot. That snappy gearbox and uber-responsive throttle require finesse, especially at low speeds. And unless you’ve got a sensitive bum and racecardriver reflexes, you’ll also need to take it easy with the accelerator when exiting corners, as the M4 is more tail-happy than the RC F. 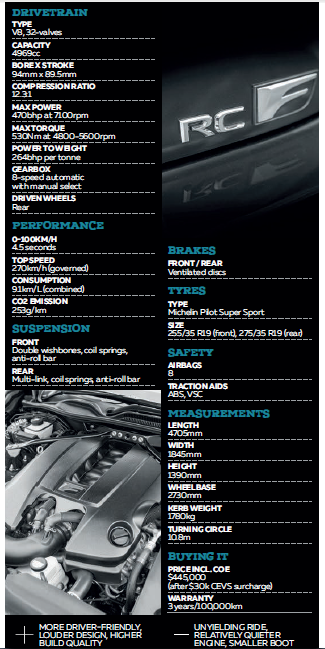 The Lexus, in spite of its big power output and track-ready handling, is actually quite driverfriendly and happy to be driven at a normal pace. The 5-litre V8 has a creamy and linear disposition, and only delivers as much performance as you demand of it. The RC F’s corner-carving talents come at a price, though, for the ride is almost too firm for regular tarmac. With the Vehicle Dynamic Integrated Management (VDIM) set to Normal, the car exhibits a tendency to pitch forward and backwards over poorer surfaces. Ironically, you’ll have to set VDIM to Sport S+ (thus making the ride even firmer) in order to quell this behaviour and prevent motion sickness. 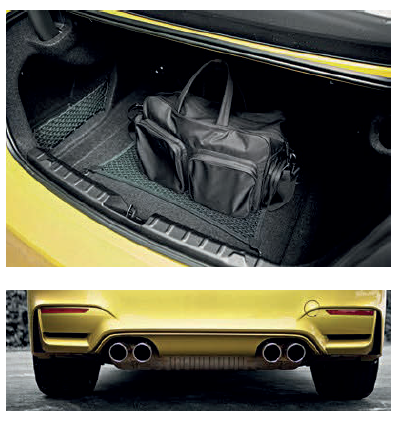 The M4’s 445-litre boot is more useful than that of the RC F, as the cargo netting lets users secure loose items.

The “samurai” in our story has put in a compelling performance – it is rapid, luxurious and powerful. The M4, on the other hand, has shown itself to be more agile and precise, with a more emotive “battle cry” to boot. In this jousting match, the RC F has won the hearts of enthusiasts looking for a refined track-day machine, while the M4 has garnered the adulation of more skilful drivers who want a coupe that’s fast, yet pliant enough for everyday driving.