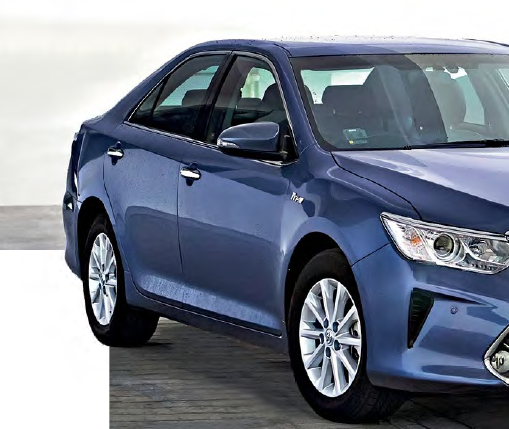 THE directive given to the Toyota Camry’s designers and engineers has always been: Be conservative. Their priorities are roominess, relaxation and reliability. Anything more is probably considered superfluous. Indeed, the Camry’s styling and performance always landed somewhere between inoff ensive and unexciting. The updated seventhgeneration Camry you see here, however, is evidence of Toyota’s eff orts to actually make this model less unexciting (which, admittedly, is not the same asmore exciting). With its restyled front and rear, the vehicle certainly looks more attractive than its pre-facelift predecessor. For improved visibility (to see and to be seen), the car now also features daytime running lights and LED tail-lamps. 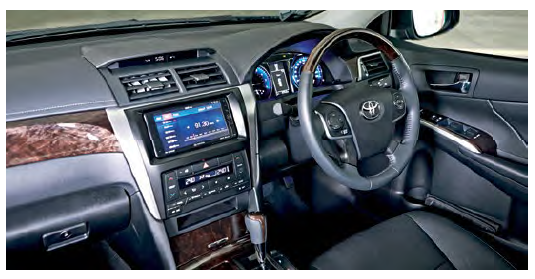 Settle into the driver’s seat and you’ll find a cockpit that’s not only as cushy as before, but more advanced, too. There’s a redesigned instrument cluster with a 4.2-inch LCD that displays pertinent driving information and several user settings. Said display is actually identical to the ones found in models from Toyota’s luxury division, Lexus. Another modern addition to the vehicle’s cabin is the InTouch Telematics infotainment system, which includes voice command and social media functions. 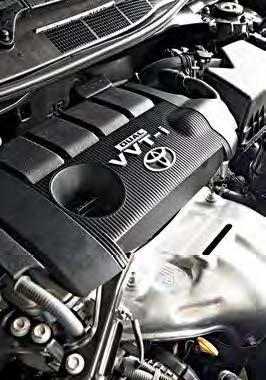 This new 2-litre engine enables the Camry to complete the century sprint in 10.8 seconds – 0.2 of a second quicker than the pre-facelift model.

Another modern addition to the vehicle’s cabin is the InTouch Telematics infotainment system, which includes voice command and social media functions. The system’s coolest item is its Air Gesture feature, which lets towkays try their hand, literally, at “Jedi mind tricks”. With a wave of their hand, drivers can increase/decrease the volume level, as well as swop between radio stations and music tracks. Air Gesture works better in theory than in practice.

An up/ down motion is supposed to raise/lower the volume level, but it can easily end up changing the radio station. Other times, merely adjusting the central air-con vents can cause the same changes. Until the function is perfected, it might make the towkay feel more like a Padawan (apprentice) than a Jedi master. But sure to make the driver feel like he commands more force than before is the Camry’s performance. The new 2-litre engine, which now includes Toyota’s latest D4-S fuelinjection technology, is both more powerful and more economical than the previous 2-litre engine. 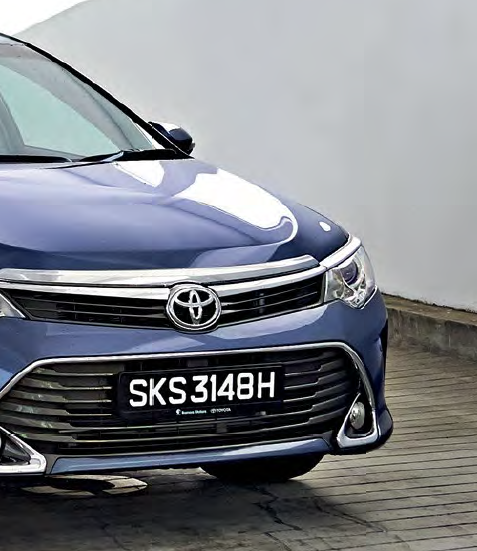 The new output of 164bhp and 199Nm is 16bhp and 9Nm more than the older motor’s, while fuel consumption has been cut by 2.5km/L to 14km/L. More importantly, the new motor is a lot cleaner – it emits 167g/km of CO2, or 37g/km less than before. The CO2 figure is significant because it places the Camry 2.0 in the neutral band of the new CEVS regulations (eff ective this month). If this model had retained its old drivetrain, it would be subjected to a $10k CEVS surcharge. 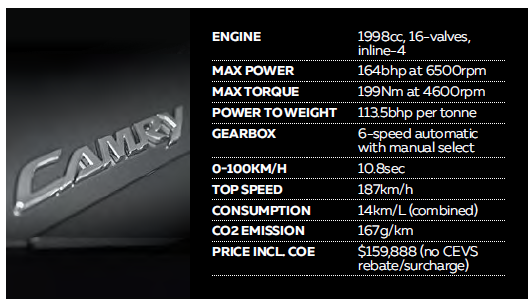 Helping this automobile achieve these figures is its 6-speed automatic, which is a welcome upgrade from the dated 4-speed auto in the preceding model. The new gearbox is more seamless than before, and with its two extra ratios, it makes the car quieter during expressway runs, too. These mechanical updates give the vehicle a bit more pep in its step. As a bonus, the helm also feels a little more direct. Although Toyota did not mention this in the press release, a check with offi cial dealer Borneo Motors revealed that the steering was indeed tweaked to improve its precision. The Camry’s sharpened styling and upgraded performance make it a modern towkay with plenty to talk about. At the same time, these enhancements give the Toyota stalwart the boost it needs to contend with newer competitors, such as the Nissan Teana (see box story). 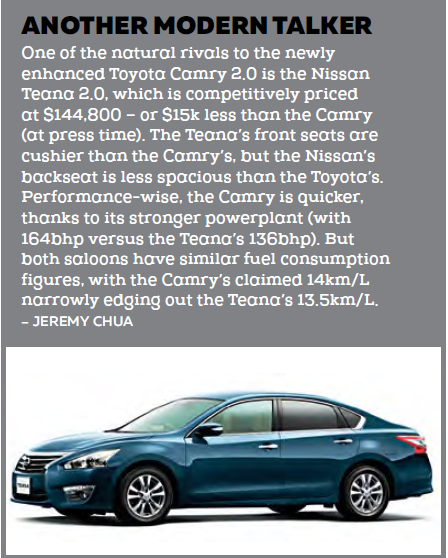