DON’T get me wrong – I didn’t suddenly come into an inheritance, nor did my 4D numbers come up. The S-Class in question is a nineyear- old S280 with 140,000km on the clock, acquired as a shortterm ride to replace my wife’s trusty Forester that recently went to the great scrapyard in the sky. We didn’t set out looking for a limousine, but we do need a fairly large car to fit our three kids. After checking out heaps of dodgy, high-mileage vehicles, we bought the S-Class because, incredibly, it was the cheapest old banger we could find (on an annual depreciation basis).

Our car is one of the run-out examples of the W220 S-Class, a model that first appeared in 1998. But even an old S-Class is still an S-Class, and getting into it after driving almost any other car is incredibly therapeutic. The big leather seats are as wide, flat and comfy as an armchair. Everything feels solidly made, the leather trim is still near-immaculate despite almost a decade of use, and once the soft-close motors of the vault-like doors have sucked them shut, I’m ensconced in a plush, impenetrable cocoon. 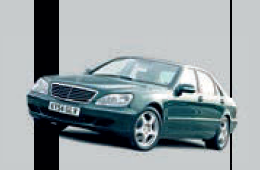 Even a nineyear- old S280 is still an S-Class, says Edric, who finds driving it to be incredibly therapeutic.

With just 201bhp to shift 1.8 tonnes of Stuttgart steel, the car isn’t going to outdrag any C63s (it wouldn’t even pip a C200), but still it’s pleasantly torquey and can more than hold its own in urban traffi c. The engine’s thirst (6km per litre) will put you off any full-bore antics, too. In any case, the car’s unfussed, relaxed mien is so infectious that street racing will be the last thing on my mind. Instead, I take it easy, revelling in the buttery smoothness of the V6 engine, the cabin’s supreme refinement and ample lounging room, and the magically cushioned ride. I use it for the morning school run, and the sense of well-being the short trip in the S-Class engenders is a great way to start the day. It even handles quite neatly, with linear steering and not too much body roll.

I can even prod a button on the fascia to firm up the air suspension, if I’m really pressing on. Despite the car’s age, everything still works perfectly, with the exception of the electric rear sunblind, whose motor has packed up. The W220 was the first S-Class with standard air suspension, which is well known for springing a leak. But, so far, ours seems to be holding up (fingers crossed). My friends are rolling in mirth at the idea of me, the hardcore petrolhead, swanning around in a towkay car, but I’m the one having the last laugh – from the plush, leather-lined, climate-controlled cabin of my S-Class, of course.

To his own surprise, edric reaches for the s-class key more frequently than that of the lightweight, mid-engined two-seater in the same garage