Putting our daughter in a kart for the very first time marked a significant milestone for us as a family and a rather emotional one for me.

WE finally took our daughter karting.

She first expressed an interest to give it a go when she was six, but due to minimum age and height requirements, we had to put it off for a few years.

It reminded me of when I was a teenager anxiously waiting to turn 17 so that I could sit for my Basic Theory test, the first step towards obtaining my driver’s licence.

The urge to bring her karting has nothing to do with wanting to groom her into some racing prodigy.

It was simply a natural extension of my own passion in cars and motorsport, which I wanted very much for her to experience.

It was all she talked about in the days leading up to it. She has always been very enthusiastic when it comes to trying out new things, but I detected just that extra ounce of zeal when it came to karting.

From her point of view, it was the closest thing to driving a real car until she turns 18 – when she will be allowed to obtain a driver’s licence.

She was so excited she could hardly go to sleep the night before.

But being her usual cautious self, she did not let her eagerness get to her head and she was asking me questions such as, “If I were to crash, there will be safety barriers at the side, right?” and confirming that she will be provided with a safety helmet.

Her enthusiasm was infectious and we all looked forward to that karting Sunday.

We had decided to turn it into an extended family outing, where three generations of petrolheads can take to the track together.

Both my dad and I used to participate actively in local motorsport events, but it has been a while since we last did any racing proper, so we were eagerly anticipating the Sunday’s activity even if it was not a race per se.

Seeing her doing her laps on the karting track, I was overcome with emotion. 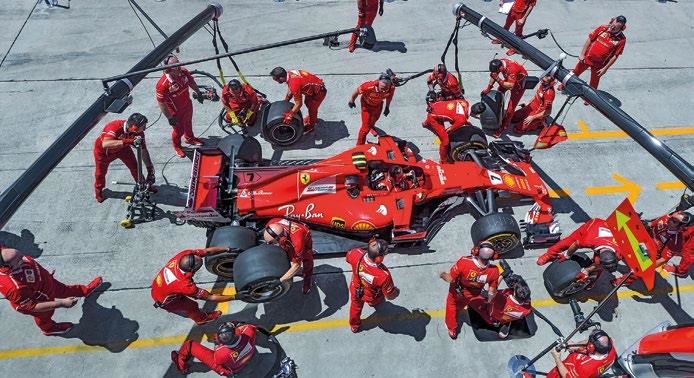 Lynn and her hubby have always tried to teach their daughter the importance of good teamwork and sportsmanship.

Regular families mark their children’s development milestones such as when they can walk, talk and feed themselves, but for a family of motoring enthusiasts, we track our daughter’s (and granddaughter’s) growth by the “cars” that she has driven.

From the kiddy ride-on toy cars decorated with cartoon motifs, to pedal cars fashioned after actual car brands, to relatively realistic convertible-style battery-powered cars that look quite like the real thing, complete with doors that open, a key to start the ignition, signal indicators, headlamps, and forward and reverse gears.

TAKING MY DAUGHTER KARTING WAS A NATURAL EXTENSION OF MY PASSION FOR CARS AND MOTORSPORT, WHICH I WANTED HER TO EXPERIENCE.

When even those became too slow for her (in addition to the fact that she could no longer fit into the cockpit), she took to playing Mario Kart, Asphalt 8 and Gran Turismo on various gaming devices and mobile tablets, often beating other players to my surprise.

She took the first lap slow and steady, familiarising herself with the circuit, approaching the corners cautiously, before gradually picking up speed.

Her driving style is an accurate reflection of her personality –competitive, but not aggressive, cautious, but with some calculated risk-taking.

I was thrilled to see that despite it being her maiden attempt, her racing lines were fairly decent. Maybe all that gaming paid off, or maybe I am just biased.

The most important thing, however, was that she thoroughly enjoyed herself that afternoon.

Even while exercising full concentration as she was doing her laps, she managed to give me a wave as she drove past the pit lane and spotted me behind the pit wall, trying to catch video footage of her lap.

Another key lesson is one about teamwork and sporting conduct, which we took the opportunity to emphasise to her.

Whatever sport you are in, even when you are competing as an individual, there will always be a team of people behind you – pit crew, engineers, sponsors, coaches, family and friends.

Play hard and play fair. Winning is important, but how you achieve it is just as significant.

LYNN’S DAUGHTER WILL BE OLD ENOUGH TO SIT FOR HER DRIVING TEST IN 10 YEARS’ TIME. THAT WOULD MARK A COMING OF AGE THAT LYNN IS NOT SO SURE SHE WILL EVER BE READY FOR.