Having a heads-up display not only looks cool in your car – it also improves driving safety. Continental’s HUD brings the future of driving to the present.

HAVE you ever had to look down at your instrument panel to check your speed while driving?

When you do, you feel like you need some time to recalibrate your vision to look at the instrument panel, which can be distracting.

In fact, your eyes need to readjust from the longer visual distance to the shorter distance – called “accomodation” – and then back again to the traffic around you.

If you were travelling at 90km/h – the speed limit on Singapore expressways – you would have covered some 25 metres in that half a second it takes for your eyes to adjust.

For cars equipped with Continental’s heads-up display (HUD), you’ll never have to look down at your instruments again.

Information is presented directly in your line of sight: anything from current vehicle speed to GPS navigation data is displayed right in front of you.

It’s displayed not as a static image but rather one that “floats” over the top of the hood. The information appears about two metres in front of the driver’s eyes, which reduces the accomodation time and therefore, the strain on the driver. 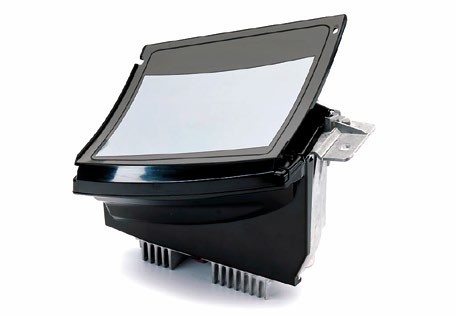 For more advanced applications, an augmented-reality HUD overlays important information over the road ahead, almost like what fighter pilots see in their cockpits!

It’s a system that ultimately improves comfort on long drives, because your eyes can concentrate on the road ahead and not worry if you’re breaking the speed limit.

Also, the HUD is able to flash warnings – like proximity warnings – without the driver needing to look down at the instruments.

To produce a clean and distortion-free image, Continental manufactures the HUD units to very tight tolerances.

An example would be the concave mirror that forms part of the HUD. Made via plastic injection moulding, it has a tolerance of under 5 micrometres, or 0.005mm across its entire surface.

Meanwhile, due to the large range of ambient brightness, key ingredients for any good HUD are extreme luminance and responsive brightness control to produce an image that can be easily read at a glance.

Any optical distortions through the shield are electronically corrected on the display.

Continental has put a lot of research and development into optimising the picture generating unit (PGU), the component that produces the images for the HUD.

It consists of a heat sink, printed circuit board, LED matrix, and TFT color display and light guide.

The latest HUD displays have the ability to display a 3.1-inch image on the windscreen and have a resolution of 800×480.

To make the picture in front of the driver visible under any lighting condition, it’s essential the HUD’s brightness can overcome anything the sun can throw at it.

To that, Continental has improve the existing PGU’sd performance and efficiency. Compared to Continental’s first generation HUD, the TFT display in the second generation has already reached 1300 candela per watt (cd/W).

Work is underway to boost the visible brightness to 1700 cd/W, and in a few years a brightness of 3000 cd/W will be a realistic target.

But a brighter display doesn’t correspond to a larger power draw. Just 8W of electrical power are needed to run the HUD, despite the intense brightness of the display. Thanks to increasing efficiency in LED technology, the luminance of the visible display in the series has already reached more than 10,000 cd/m2. Continental was one of the first to offer HUDs for mid-range vehicles like the BMW 3 Series. For smaller vehicles, optimising costs is important, alongside reducing installation space, an effort which has directly led to the second generation of HUDs taking up half the size of the first generation. Aside from the 3 Series, Continental currently produces HUDs for mainstream models like the Mercedes-Benz C-Class, Audi A6 and A7.

BMW X3 xDrive30e review: Not too X3me
This site uses cookies to help us serve you better. By continuing to explore our site, you accept our use of cookies.I Accept