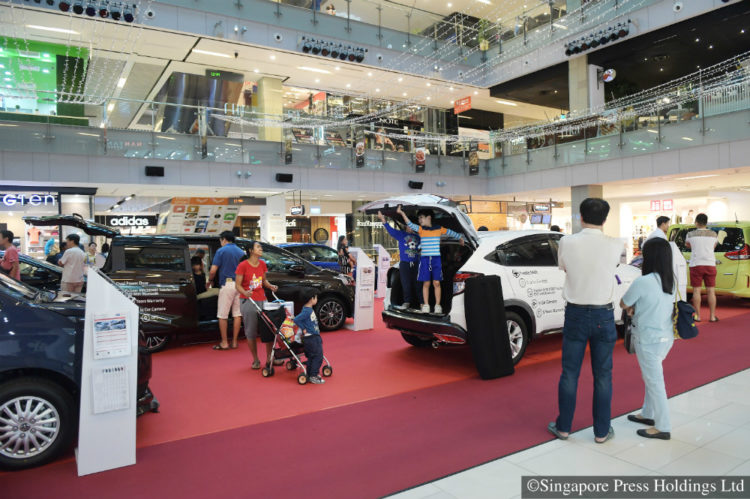 Customers checking out hybrid cars at the VentureCars roadshow on March 4, 2017.

Besides the savings from lower fuel consumption, their popularity has also been driven by the attractive rebates offered under a Carbon Emissions-Based Vehicle Scheme, which incentivises drivers to use greener cars.

Car rental firms which serve Uber and Grab drivers are also adding hybrids to their fleet, such as the Toyota Prius and the Honda Vezel hybrid.

For the uninitiated, here are three things to know about hybrid cars:

1. How hybrids work
Hybrid cars have a combustion engine and an electric motor.

At slow speeds, such as when moving off, the petrol engine in a hybrid is shut off and the electric motor runs the car.

During normal driving, the petrol engine takes over, but some of the power is also directed to a generator. This produces electricity for the motor to assist the engine in powering the car.

For full-throttle acceleration, such as during overtaking, extra energy is drawn from the batteries to run the motor at maximum power.

2. Recharging the batteries
Conventional hybrid cars have an onboard generator, which helps to convert the car’s kinetic energy into electricity. This helps to charge the batteries when the car is cruising or braking, for example.

But one hybrid variant, the Plug-in Hybrid Electric Vehicle (PHEV), has a battery that can also be recharged from an external power source, such as a standard mains socket.

This allows the car to be driven solely on electric power alone over longer distances. Currently, there are 125 PHEVs in Singapore.

3.The green factor
In general, hybrid cars can be 40 percent more fuel efficient than comparable petrol-powered ones. The Toyota Prius 1.8, for example, has a fuel consumption of 3.7 litres for every 100km, or 27km per litre, according to the manufacturer.