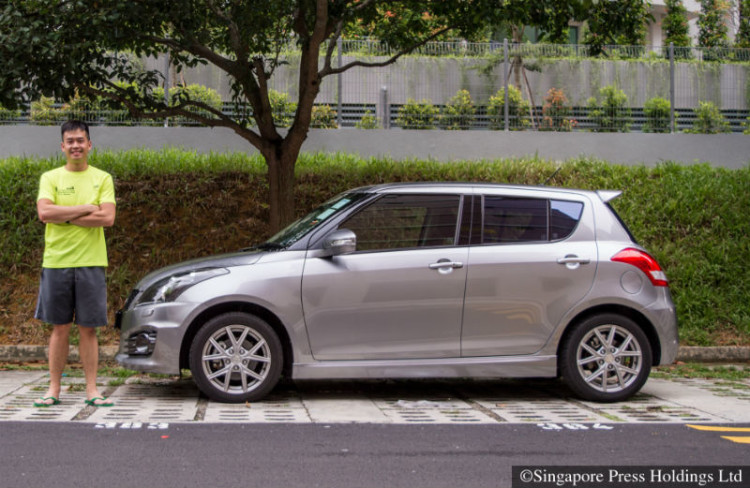 Derrick Koh is a product executive at Performance Motors’ unit for BMW i, the Bavarian manufacturer’s electric and hybrid sub-brand. But his choice of car has so far been Japanese, largely because of budget constraints.

His current ride is a Suzuki Swift Sport, which was preceded by a Toyota MR-S.

There were only two alternatives to the Swift, he says – the Toyota 86 and Subaru BRZ. “But those were out of my budget,” Mr Koh says with a sigh.

The young man took delivery of his new Swift Sport in March, just days after he turned 27.

“It was the best possible present to myself,” he says.

Why the Swift Sport?

“It is affordable, driver-oriented, with a manual transmission and a non-turbocharged engine, which gives a much sharper throttle response,” he says.

Those were the attributes of his MR-S two-seat convertible, a car he decided to give up when its certificate of entitlement expired.

“I still miss my MR-S,” he says. “While both cars are light, the Toyota turns in with less inertia,” he notes. “Also, my best motoring memories were from cruising with the top down.”

Still, having a car with four doors and a sizeable boot is an advantage he cherishes.

“My girlfriend and I are very outdoorsy. We go for hikes practically every weekend. If you asked if I could now live with a two-door, the answer is no,” he says, adding that the Toyota had a tiny storage compartment.

“Now, we can finally take our footwear, foldable bikes and scooters with us,” he says. “Also, our friends can finally come along when we go out.”

Mr Koh says his stealthy silver Swift is “unidentifiable as the Sport version to the untrained eye”, so he does not encounter many “challenges” to race.

“That said, I get honked at more in the Swift than in the MR-S,” he says. “Maybe it’s because with the top down, I could turn around and look the perpetrator straight in the eye.”

Mr Koh invites The Straits Times to go for a spin with him. On an empty stretch of road, he opens up the throttle, rowing gratuitously through the gears.

“The joy I get driving a manual far outweighs the grind in traffic jams,” he says. “Plus, I can crawl forward with millimetre-perfect control on the clutch.”

He clearly enjoys the car. “The seats hug you, the steering is nice and chunky, yet the car is usable and quiet,” he says.

“Working for BMW, I get to drive the i8 supercar. But within a few seconds on Alexandra Road, I have to back off. In my Swift, I can exploit the car’s performance without breaking the law,” he notes.

Does he plan to modify his car to up its performance, as many Swift Sport owners often do?

“I do not ‘zhng’ my cars,” he says, using the Chinese slang for souping up. “I like to keep them stock as their engineers intended.”

He continues to wax lyrical about his Suzie. “If I had a 10-car dream garage, the Swift Sport will be in there, alongside the Honda Civic Type R, McLaren F1, Porsche 911 GT3 RS and Ariel Atom,” he declares.

Evidently, budget constraint is not the only reason for this man’s choice of car.