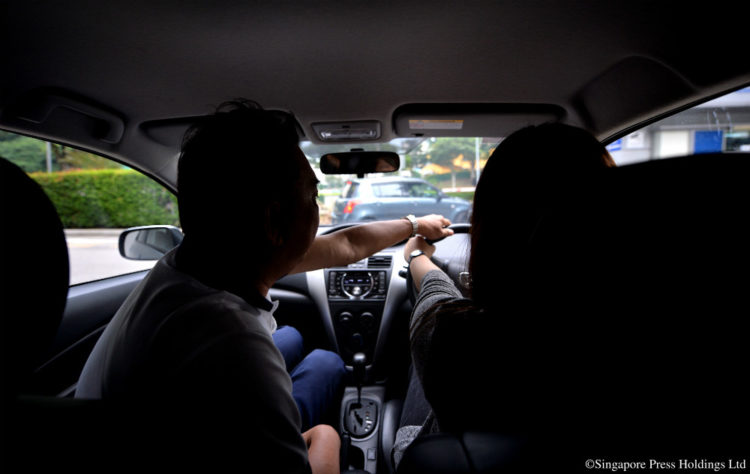 He has taught more than 1000 student drivers, but Mr Usman gave just one of them the “super special treatment”.

The student? His wife.

And the “super special treament”? She received more scoldings than his other students.

Mr Usman, who asks that we do not use his real name, tells The New Paper: “We had not even reached the 10-minute mark and she was already in tears.”

The 28-year-old has been a driving instructor at a private school for three years.

He recounts how his wife “set the record” for being the fastest learner to cry. But he was not being unfair. “I think I was the toughest when it came to teaching her. (She got scolded for) not getting the car straight, and for not doing the necessary checks in the correct order,” he says, with a laugh.

Mr Usman says he gave his wife the cold treatment the minute they got into the car – as he does with all the learners assigned to him.

“It’s a tactic I use when I’m with my students, just so they know it’s serious business when we’re on the road,” he explains.

It was not always this way, he admits.

“When I first became an instructor, I tried to make my students feel comfortable by chatting with them, but I noticed that the younger students were taking my friendliness for granted,” he says.

“Some even tried to be friends with me, just so they could wriggle their way into having an ‘easier’ lesson.

“I wasn’t going to let that happen.”

CHALLENGE
Among Mr Usman’s many students was a 58-year-old woman who picked up driving lessons to prove a point to her son.

Mr Usman says: “Apparently, he didn’t think his mother could get her licence, especially at her age.”

And thus Mr Usman was introduced to one of the toughest students he has taught in his career.

He says jokingly: “It was brave of her to take up the challenge, but I definitely wanted a word with her son for putting her up to such a challenge.

“She drove me nuts. She kept forgetting the steps despite me repeatedly reminding her over and over again of the driving protocols.”

He adds: “But I couldn’t really blame her because she was trying her best. She was just forgetful.”

Despite the woman’s forgetfulness, she eventually managed to pass her practical driving test.

He confesses: “When my students fail on the first try, I start questioning myself on why they failed, or what I could have done better.

But Mr Usman cannot see himself doing another job. The self-professed car enthusiast says: “I’ve always been fascinated with cars since I was a kid.

“Now I can help with educating younger learners how to drive. And knowing I can help ensure that new drivers are being safe on the road makes the job extremely fulfilling.”

He adds: “Let’s be honest here, some of the drivers you see on the road nowadays are beyond horrible.

“At least, when I get home every day, I can go to bed knowing that I’m doing something to try and change that.”

SECRETS OF THE TRADE
1) Always maintain good customer service with your students and build a rapport with them. It will help them trust you, and subsequently develop the desire to learn as much as they can from you.

2) Draw the necessary lines between student and teacher. But it is also important to make sure you are not too authoritative at the same time.

3) Always aim to leave a lasting impression so that when they are on the road, they will remember “this is what my driving instructor taught me”.