CRASH TEST DUMMIES ARE NOT THAT DUMB | Torque
Loading posts...

Crash test dummies go about their business without complaint and do the best job they can, even if the job entails hard collisions which are repeated ad nauseam. Banging into exploding airbags. Bashing into dashboards. Straining against seatbelts and other restraints. Getting cut by shattered glass. Inhaling hazardous vehicular fumes. Suffering the screeching of their “death railway” as it hurls their “death-row car” towards its dramatic end. Crash test dummies are designed to be tortured for the sake of automotive safety research.

The instruments of their torture have become more torturous over the years. Automakers overhauled crash test procedures, increasing their speed, severity and complexity, thus forcing crash test dummies to work even harder for the money. Not that they’re paid in the first place…

Incidentally, a new dummy costs around US$200,000, but it can be reused. After it has been refurbished, recalibrated or repaired, the poor fella can be sent crashing again. He can endure almost anything to make a car safer for its human occupants, unless he burns to a crisp in a freak post-crash fire.

He is not alone – there are entire families of crash test dummies. They come in different types, sizes, weights and heights; with a small female and large male, plus a few generic permutations in between, accompanied by child dummies representing various age groups. There is even a “pregnant woman” in her third trimester. 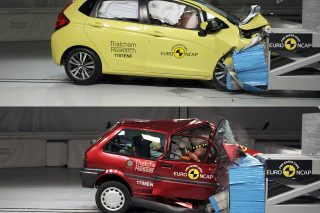