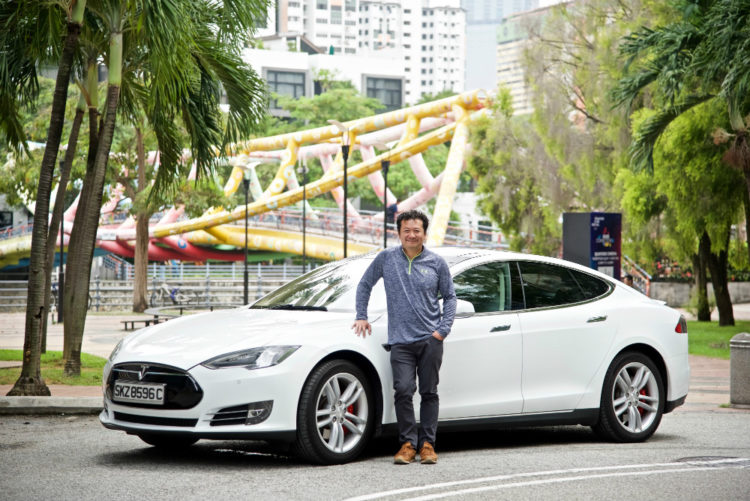 Mr Joe Nguyen and his Tesla Model S, which was subjected to a $15k CEVS surcharge.

According to Land Transport Authority figures, there are just 129 EVs and PHEVs here (as of October 2016), with BMW accounting for most of these cars.

According to a 2011 report by the Asia-Pacific Expert Group on New and Renewable Energy Technologies, a 2 percent penetration by 2020 will be able to reduce Singapore’s total carbon emissions for the land transport sector by 4 percent.

The group is under the Asia-Pacific Economic Cooperation (Apec) Energy Working Group and promotes the increased use of new and renewable energy technologies in the Apec region.

Several reasons have been cited for the slow adoption of electric mobility here, including high purchase price, the lack of charging infrastructure, aversion to new technology and unclear national policies on green cars.

But the early adopters do not see these obstacles as being insurmountable, even if some of them are driving tax-free electric models in a test-bed programme.

Mr Tan Kian Hwee, 38, manager of power and utilities at Sembcorp Industries, was among the first to drive such a tax-free EV.

He says the electric Renault Fluence ZE he has been driving since 2012 is dependable.

“It has already clocked 90,000km,” he says, adding that it has a range of about 100km and takes about six hours to recharge.

“From a business viewpoint, what you want is low cost, less down time, and trouble-free maintenance.”

Mr Eu Pui Sun, 59, senior vice- president of corporate sales at Senoko Energy, has been driving a test-bed Mitsubishi i-MiEV since 2011. It cost Senoko $88,000 – less than half of what it would have cost if all the usual taxes applied.

Mr Eu reckons more needs to be done “in terms of government tax incentives” if EV adoption is to gain traction here. Otherwise, their inherently high cost will put off many consumers.

Higher prices, however, have not stopped Jurong Port and Singapore Power from buying electric Renault Kangoos, which cost about 20 percent more than their diesel equivalent. They are the first corporations to do so without the hefty tax breaks afforded by the EV test-bed.

Mr Han Fook Kwang, 63, a senior fellow at the S. Rajaratnam School of International Studies, says he is “blown away” by his battery-operated BMW i3.

Mr Han, former editor of The Straits Times who drove a Porsche 911 previously, says: “The best thing is I don’t ever have to visit a petrol station. It is so quiet and nippy, too. So what’s not to like?”

“It’s a trailblazer for a sports car,” she says. “Not only is it a green car with low emission and high efficiency, even the materials of the car are eco-friendly.”

She says she clocks about 600km a month and spends only $70 a month on petrol – exceptionally low for a 360bhp car.

Both Mr Han and Dr Soh say there are few public chargers here.

There are 74 public charging stations across the island managed by Bosch and Greenlots. And 2000 more will roll out when an electric car-sharing test-bed programme kicks off next year. About 400 of those will be made accessible to the public.

In comparison, there are only 200 petrol stations.

The 45-year-old senior vice-president of an Internet research firm imported a used Tesla Model S P85 from Hong Kong last year. It took him more than six months to get it approved and registered.

His $400,000 car was also slapped with a $15,000 carbon surcharge – the first electric car to be penalised this way. He also had to make a written undertaking to the Energy Market Authority not to charge his car at public charging stations, “which are not adapted for Teslas”.

Still, Mr Nguyen is glad he bought the car. “It is silent and the torque is simply amazing,” he says, adding that its range of 380km is more than ample for his typical daily mileage of 80 to 100km.

He adds that his electricity bill for the Tesla “is just $80 per month”, compared with the $350 to $400 he spent on fuel for his previous car, a Toyota Wish.

Observers, however, say EVs will continue to appeal only to a niche segment of buyers unless major changes are made to Singapore’s car taxation scheme.

National University of Singapore transport researcher Lee Der-Horng says electric cars are not only costlier to buy, but they also “have no resale value”.

Even though Singapore’s compact size means an EV’s current range of 100 to 150km is usually more than adequate, “many car owners want to drive to Malaysia”, Prof Lee says.

“If the government really wants to encourage EVs, it could exempt them from COE,” he says. “But from a car policy point of view, is that what we want to do?”

He adds that the authorities may feel the air quality here is still “fairly good” and there is no urgency to promote EVs, unlike in, say, China, where city smog is often near hazardous levels.

In short, he says he is “not optimistic” about the prospects of electric cars here in the short term.

Besides economic and fiscal reasons, another factor – battery reliability – may be tripping EV adoption.

Mr Eu reveals that this is an issue with the Mitsubishi i-MiEV he has been driving. It had a “realistic range” of 120km when new, but that has now been halved to 60km because of battery wear.

Still, the engineer says it is still able to cover his typical daily mileage of less than 50km. “The i-MiEV runs like clockwork and has never broken down in over five years and 65,000km,” he says.

“You just have to be mindful of its effective range and plan your trip accordingly.”

Asked if he would buy an electric car himself, Mr Eu, who owns a diesel Renault, says he would if the price was similar to that of a conventional car.

In spite of its drastic battery degradation, the running cost of the i-MiEV “is still lower” than that of a petrol model, he says.