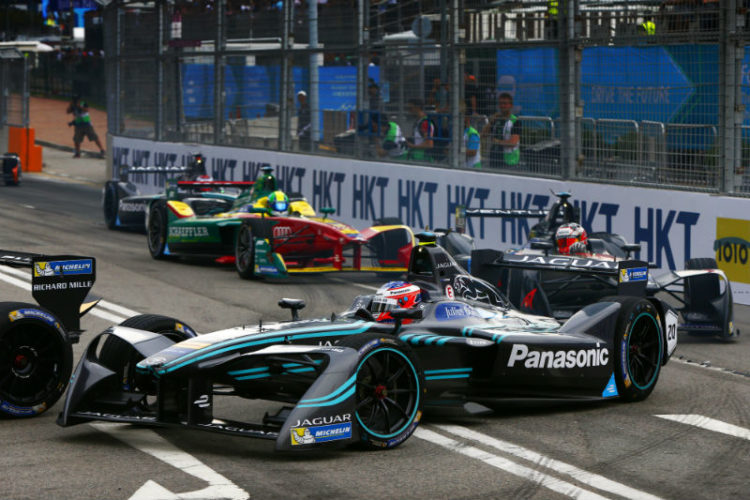 Having been to several Formula One (F1) races, it feels a little bizarre to see 20 single-seater race cars making so little noise at a race.

Even cheers and whistles from the spectators in the grandstand seem to surpass the sound from the race cars.

That aside, this race can be as exciting as F1. The electric whine is quite urgent if you listen carefully, the cars are lightning quick and keeping up with the pace on the track clearly requires as much focus as drivers in traditional races.

This is the third season of the Formula E Championship Series – a battery-powered version of F1. The 12-race season started in Hong Kong on Oct 9 and will conclude in Montreal, Canada, in July next year.

Similar to F1, Formula E race cars look like works of art, with lean and mean drivers to complete the picture.

But the two championship races differ in more ways than one. For starters, a BMW i8 is used as a safety vehicle in Formula E. In F1, the current safety car is the Mercedes-Benz AMG GT-S.

But the biggest difference is this: Manufacturers are not in the race for fame or fortune. Instead, they are in it to innovate and develop the technology behind electric cars, which will, in turn, trickle down to everyday road-going battery-powered cars in the future.

This is why Jaguar is taking part. Jaguar Racing team director James Barclay says: “We wanted to be racing again, but we needed to do it for the right reason. That’s where Formula E comes in. The championship race is relevant for our future as we will be building electric vehicles.”

In Hong Kong, the circuit is about 2km long, skirting the Central Harbourfront, featuring 10 turns and a 500m main straight.

During the 50-minute race, Jaguar Racing drivers Adam Carroll, 33, and Mitch Evans, 22, started steadily and strong. By the end of it, however, Carroll finished 12th while Evans could not complete because of technical issues with his race car.

Not too shoddy for the brand’s first outing in this series.

Jaguar Racing race director Craig Wilson says: “Jaguar is certainly committed to being successful in Formula E. A lot of lessons were learnt in Formula One and it’ll be similar for this.”

Jaguar’s previous F1 endeavours were hardly successful and it quit after the 2004 season.

Mr Wilson happens to be the managing director of Williams Advanced Engineering, the sole supplier of the batteries that power the cars in the electric race.

Despite its squeaky-clean image – and its lack of dramatic noise – Formula E still manages to keep you on your feet. After all, the cars reach a top speed of 225km/h on the straight and there are plenty of overtaking action and hairpin turns.

Those who frown upon F1 for its huge carbon footprint would approve of this more sustainable version.

2) A Formula E driver changes to his second car during a pit stop. Charging of the race cars or tyre changes, unless caused by a puncture or damage, are not permitted during this pit stop.

In an F1 race, cars make pit stops with the primary purpose of changing tyres or performing minor repairs.

3) Formula E fans can be part of the race via FanBoost, which asks fans to vote for their three favourite drivers in order for the drivers to receive a 100kJ (or 3.3 seconds) of surge energy which can be used during the race. F1 fans just cheer.

5) An F1 driver covers an average distance of 300km in a single race. A Formula E driver typically covers 90 to 150km a race.

6) Formula E cars use 18-inch rims, fitted with Michelin tyres with treads that are suitable for wet and dry conditions.

In F1, cars run on 13-inch rims with either Pirelli slicks or wet tyres, depending on the weather.

The 10th place will receive one point. But in Formula E, a twist is added – three points are awarded to the driver who secures pole position, and one extra point goes to the driver with the fastest lap.

10) The average noise level for a Formula E race car is 80 decibels (dB), which is roughly the level of sound made by a household vacuum cleaner. This is far quieter than the 134dB made by an F1 car.