Getting workers to ditch the car | Torque
Loading posts...
0 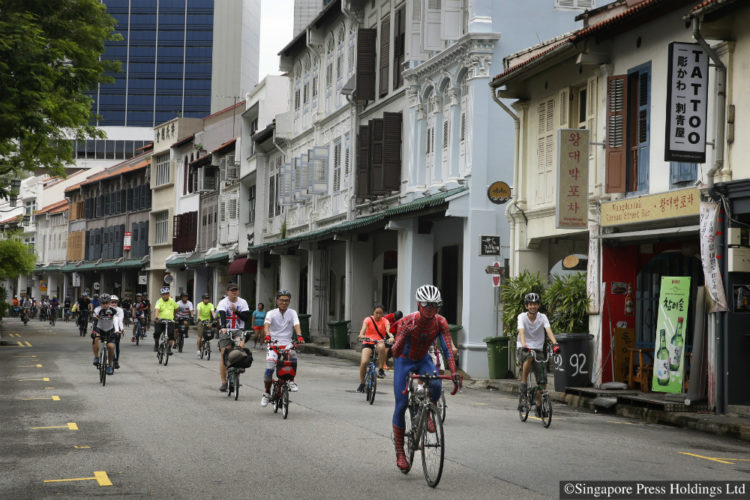 A participant dressed up as ‘Spiderman’ joining other participants as they make their way down Amoy Street for Car-Free Sunday as the event returned on 30 October 2016. The programme now covers 5.5km of roads, up from 4.7km previously, and has extended into the Telok Ayer conservation area.

More people will cycle or ride their scooters to work in future, if given the right facilities and encouragement, employers and experts say.

One of them, developer Lendlease, is building 437 bicycle parking spaces and 1km of cycling paths that will connect its Paya Lebar Quarter development with the wider park connector network.

Another company, global engineering consultancy Aecom, has installed shower rooms and special racks for e-scooters at its office.

These employers say “end-of-trip” facilities such as secure parking and showers can go a long way towards encouraging employees to ditch their cars for something a little more green.

At Lendlease’s Paya Lebar Quarter, more than a quarter of the bicycle parking area being built will be secure, card-access spaces, where users will be provided with fresh towels, showers, lockers and tools for maintenance.

The cost of these features has been worked into the overall cost of the $3.2 billion development, says the company.

Lendlease managing director Richard Paine says that at most workplaces today it can be “a bit of a hassle” to cycle to work.

“You have to fight for the single shower that may be available, you have to walk into the office wearing all your cycling clothes, plus the logistics of carrying a towel and all your stuff. We feel that if we provide these facilities, they are an enabler for people to then change their lifestyles.”

Mr Scott Dunn, Aecom vice-president for growth and strategy in South-east Asia, says the company wants its “employees to be able to choose different ways of coming to work”.

Late last year, it installed 15 specialised racks for e-scooters at a cost of $22,000 at its four-level office in Beach Road.

Employers should be responsible for providing such options, adds Mr Dunn.

Buildings that come equipped with these facilities could become more commonplace in future.

Last year, the Government made it mandatory for future developments to come with facilities such as bicycle parking, shower rooms and lockers – in order to make cycling and walking more attractive options.

Aecom and Lendlease are not bound by these requirements.

The Government has said it is prepared to grant gross floor area exemptions, meaning developers would not have to pay for the floor area occupied by these facilities.

These will come under a Walking and Cycling Plan that developers have to submit for future projects.

Experts say that with the right facilities and infrastructure, people will switch modes.

About 10 percent of Lendlease’s Paya Lebar team of 150 staff cycle or ride their e-scooters to work, says Mr Paine.

That is more than five times higher than the national average of 1.5 percent for cycling trips.

Part of the reason could be how well-connected the area is to the park connector network – Lendlease is smack in the middle of both the Geylang and Sims Avenue park connectors.

National University of Singapore associate professor Cheah Kok Ming says an entire ecosystem of facilities has to be in place – this means that while cycling paths are being built by the Government, workplaces also have to provide end-of-trip facilities like shower rooms and lockers.

Prof Cheah, who is from the department of architecture, says: “This is critical, people are reluctant to cycle into the city because old buildings there don’t have these facilities.”

As new buildings replace old ones in the city, this will gradually change. Mr Paine adds that developments in autonomous vehicle technology and car-sharing will mean that less carpark space would be required in future.

Precincts of the future will cater heavily to pedestrians and cyclists, with less space for cars.

When that happens, more people could follow the example of Mr Brandon Lee, 27, who rides to his workplace in Yio Chu Kang daily from Ang Mo Kio.

The sales executive says his workplace has both shower facilities and bike parking. “If you want to encourage people to cycle to work, companies need to cater for facilities like these,” he says.