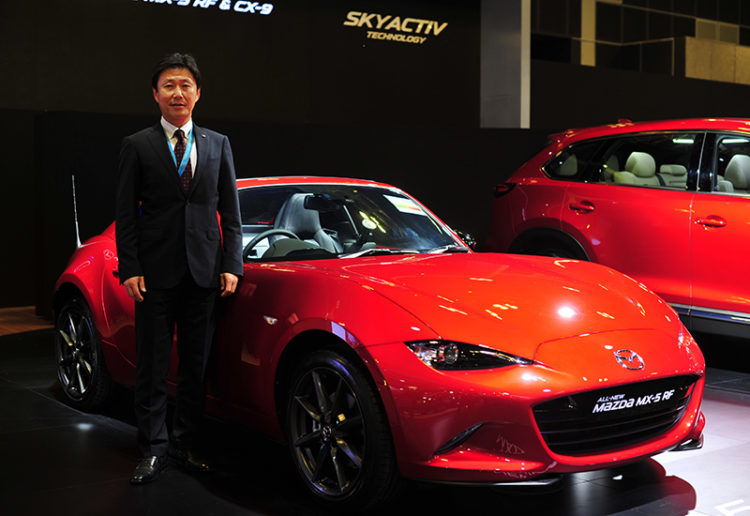 Japanese engineers are typically reserved, but once you discover what they’re passionate about, they’ll open up and begin chatting away.

Hitoshi Takamatsu is one  such engineer.

Takamatsu-san, who joined Mazda in 1983, spent his first five years creating software that correctly validated the data gathered for every braking-performance requirement.

From 1988, he was involved in the testing and research for the brakes on front-engine, rear-drive models such as the RX-7 and MX-5.

In 2000, Takamatsu-san became the manager of the company’s Chassis Testing and Research department.

In 2007, he was appointed deputy programme manager for vehicle development.

Takamatsu-san talks to Torque about how they developed the latest MX-5 and MX-5 RF (Retractable Fastback), and tells us what we can expect from Mazda’s future models.

What made you decide to join Mazda?
I wanted to work in the automobile industry, but it had to be with a carmaker with a unique history. I love how Mazda developed the rotary engine.

What was the main focus during the new MX-5’s chassis development?
We first determined the car’s dimensions and where we would place the driver. After that, it was about how stiff/strong we could make the body structure.

Was the MX-5 designed with a soft-top or hard-top in mind?
We did not discuss this. Our priority was to make it a lightweight sports car.

How did you reduce the MX-5’s weight without using carbon fibre?
We made it smaller than before and analysed the body structure to see where we could shave more weight. Since the body is light, the engine didn’t have to be bigger. We were also able to use a smaller driveshaft and differential.

Do you see electric cars in Mazda’s future?
Yes. But we cannot forget about the driver even if we switch to electric cars.

You love rotary engines. Have you ever driven the 787B racecar?
No, but I had a hand in developing its braking system. We are not allowed to drive that car!

If you were not working in the car industry, where would you be instead?
I have never considered such a scenario. I was born to join Mazda’s vehicle development programme. [Laughs]