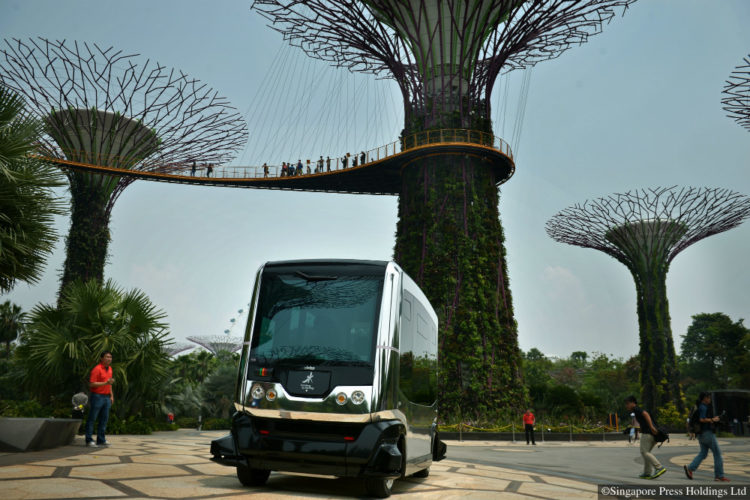 A demonstration of the Auto Rider at Gardens by the Bay organised by the Ministry of Transport during the media preview of the start of the autonomous vehicle trial in Singapore on 12 October 2015. The Auto Rider can accommodate 10 people and are wheelchair-accessible, with a motorised ramp that deploys and retracts at the touch of a button. The vehicles, which have been tested in Switzerland, are making their Asian debut in Singapore as part of a multi-agency autonomous vehicle trial.

With the huge enthusiasm for introducing autonomous vehicles (AV) on the roads of Singapore, and other parts of the world, drivers and other road users can expect a radical transformation of road transport within the next couple of years.

However, are we truly so close to the era of autonomous cars dominating public roads without human intervention? And how well are we prepared for it?

In Singapore, the development of AV deployment is speeding up, with trials already in progress on dedicated public roads at one-north, Nanyang Technological University and Gardens by the Bay, and for specific functions like truck platooning at PSA port.

Recently, it was announced that the public can expect to hop onto driverless public buses by 2020. The Government is also taking a nimble approach to legislation in order to keep pace with this emerging technology, putting in place a regulatory sandbox to adapt policies as the technology develops and as potential issues emerge.

Indeed, automated driving technology is set to fundamentally change road transport and could improve our quality of life. The obvious benefits of AVs are a reduction in the number of accidents caused by human errors, improved traffic efficiency and mobility for all, including the elderly and people with disabilities.

However, the successful implementation of the technology that promises to free up humans from the task of driving and allow them to engage in other activities, ironically, hinges on human factors, which focus on the interaction between the human driver and automation.

The levels of automation of AVs are classified according to their technological capabilities and human engagement, ranging from manual driving, where the human driver executes the full range of driving tasks, to fully automated driving, where no human interaction is involved.

Around the world, industry is close to introducing conditional or highly automated driving vehicles on public roads, while in some cases, vehicles with autopilot features that allow minutes of hands-free driving (for example, Tesla) have already been deployed. In fact, a recent study even suggests that the public expects full automation in more than 50 percent of vehicles by around 2030.

In theory, fully automated driving – with the assumption of “perfect” sensing of the environment, road mapping, decision-making algorithms and motion control mechanisms – will be the optimal solution for future road transport.

However, today, while the infrastructure and vehicle capabilities are not yet ready for full automation, intermediate levels of automation are the current reality. For the paper “A Human Factors Perspective On Automated Driving”, published in Theoretical Issues In Ergonomic Science, 12 researchers working on human factors in automated driving were interviewed.

They stressed that any automated system that removes the human from the driving task, yet requires the human to monitor and supervise the system and regain control where necessary, could be unsafe.

Human factors can have serious regulatory, liability and safety implications, both for drivers and other road users. Although human-factor challenges have long been discussed, they have hardly been adequately addressed in conversations on AV safety, liability, trust and acceptance. Can humans easily and safely switch roles from active drivers to passive system users?

Do human drivers and other road users have sufficient knowledge of how the automated systems behave and how they should respond to the actions of AVs in order to ensure the safety of all road users? Will human drivers be receptive to relinquishing control to automation, and trust the system for their daily commute?

One of the key concerns is the expectation that human drivers can remain alert and rapidly regain situational awareness following a request by the automated system, which many human-factor researchers perceive as unrealistic.

In practice, we need to design a safe and effective way to re-engage a driver who has not only been relieved from the driving task, but also engaged in another activity. This should be based on an understanding of how people will use the automated functionalities, in addition to the required reaction time to regain control of the vehicle.

Along these lines, IBM recently developed a new cognitive system to determine if and when a person or the self-driving system should take control.

Beside designing effective sensing and control systems, effective human-machine interfaces in AVs should be designed based on the type and frequency of information that human drivers should be receiving to maintain their situational awareness.

The current driver-training programmes would likely have to be modified such that the human driver is trained not only to drive, but also to understand and supervise the autonomous system in order to be effective in his new dual role as both driver and supervisor.

In addition, we need to determine how other road users, including people using other transport modes or conventional vehicles, and vulnerable road users such as pedestrians and cyclists, will be interacting with AVs.

Human drivers and all road users being aware of the automated systems’ capabilities, expected actions and limitations is a prerequisite to trust and acceptance of the technology, and, more importantly, to ensure safety for all road users.

We know that AVs could eventually offer safer and more efficient road transport and ensure mobility for all – if their deployment is set on the right track.

But first, understanding and clearly establishing the role of humans and human-system interaction will go a long way in ensuring a smooth journey for all road users – on AVs or otherwise.

•The writer is a researcher with Future Resilient Systems at the Singapore-ETH Centre, in collaboration with Paul Scherrer Institute, where he focuses on human factors, safety and resilience of critical infrastructure.