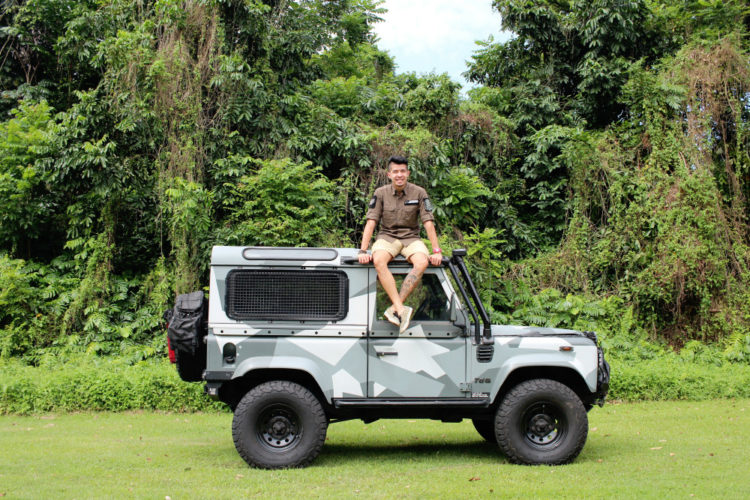 Mr Loo Yong Ping is the second owner of the Land Rover Defender Td5, which he acquired from a member of Land Rover Owners Singapore.

Ad man Loo Yong Ping has driven only Land Rovers since obtaining his driver’s licence a decade ago.

The 32-year-old creative director of an advertising agency is now into his third Land Rover – a Defender Td5 which he bought in 2016.

He is the second owner of the 2005 car, which was acquired through a member of Land Rover Owners Singapore, of which Mr Loo is secretary.

“Land Rover has stopped production of the Defender, so we can get them only through the pre-owned market,” he says.

He says he looks forward to driving his 2.5-litre turbodiesel Defender every day.

“I love the drive, the elevated driving position, the manual gearbox and even the water leaks during downpours,” he says. “Knowing that I can go almost anywhere with it adds to the sense of adventure and fun.”

He describes the car as “a happy place” and “an extension of my personality”. “Plus it’s tall like me,” adds the 1.85m fan, who claims he does not mind the car’s 70km/h speed limit.

He averages 400km a week, excluding road trips and camping expeditions, which he goes on at least once every quarter. The most recent trip was a Land Rover Festival drive last year – the region’s largest Land Rover event saw participants in 40 Land Rovers covering 5000km from Singapore to Pai in northern Thailand over eight days.

Meeting like-minded individuals who share his passion for Land Rovers has expanded Mr Loo’s social network. “We wave to one another on the road and leave messages on one another’s windscreens,” he says, adding that Land Rover Owners Singapore club regulars “are like an extended family”.

His 34-year-old wife, Ms Fannie Chua, who runs a fashion business, also loves Land Rovers, though she has never owned one.

Mr Loo recalls: “When I found out that she loves them too, I thought to myself, ‘She’s definitely a keeper’.”

The couple, who met in 2012, went on dates in his Land Rover during their courtship. He proposed with a convoy of Land Rovers and they got married in one in 2014, accompanied by a wedding entourage of 14 Defenders.

“We will grow old together with Land Rovers,” he says.

So far, he has undertaken some restorations, repairs and modifications, such as paintwork, window and door seals, bucket seats and seatbelts. He has also installed a push button ignition as the old ignition switch failed frequently.

He sends the car for servicing twice a year. Its certificate of entitlement (COE) will expire in 2026. As it is registered under Category C (goods vehicle and bus), its statutory lifespan is restricted to 20 years. This means that Mr Loo will not have the option of renewing the car’s COE.

“I would love to keep it forever… Unfortunately, I will have to let it go with a very heavy heart when the time comes,” he says.