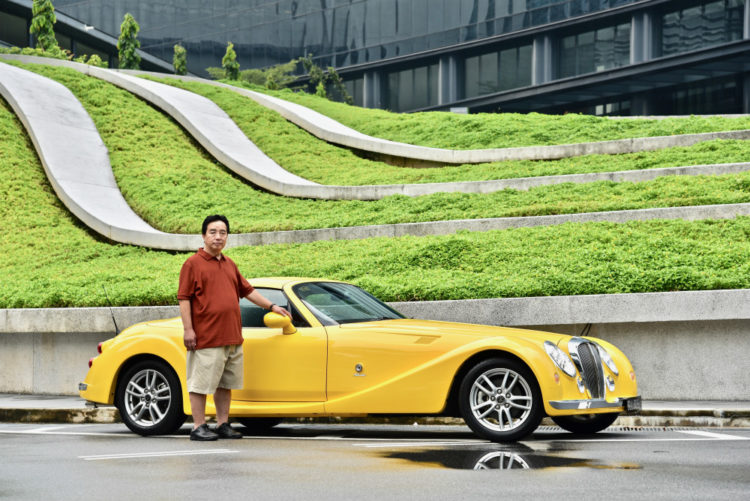 Mr Kenny Tham likes the Mitsuoka Himiko because it is a modern car with a retro look.

It was in 2009, when the 58-year-old’s kidneys failed because of a severe disorder. His wife and business partner, Jenny, 53, was his organ donor.

“I owe my second chance in life to my wife,” he says.

After the transplant, Mr Tham scaled down his trucking business and began spending more time with his family. The couple have a 23-year-old daughter, Sherlyn, who is a medical student.

His taste in cars changed gradually too. Previously, his purchases were motivated primarily by family and business needs, and revolved around models such as the Mazda 323, Honda Accord, Mercedes-Benz E200 and Lexus ES300.

Mr Tham paid $35,000 for the restored British car, which he intends to keep by extending its current certificate of entitlement, which will expire next year.

His latest “toy” is a Mitsuoka Himiko, a two-seater with a removable hardtop. Supposedly one of only nine in Singapore, the Himiko appealed to him because “it’s a modern car with a retro look”.

According to Land Transport Authority figures, there are fewer than 40 Mitsuoka cars on the road here. Mitsuoka Motors is a small Japanese manufacturer specialising in unconventionally styled, hand-built cars, some of which imitate the look of British cars from the 1950s and 1960s.

For instance, the Himiko – introduced in 2010 – resembles the Morgan roadsters of old. But underneath, it is a modern Mazda MX-5.

Mr Tham says the bright yellow sports car “never fails to attract attention” and that he has made new friends because of it.

Once, a five-year-old neighbour “was so fascinated by the car that he pleaded with his mother to ask me for a joy ride”.

“I was happy to fulfil his wish,” Mr Tham adds.

The car enthusiast takes his Morris and Himiko for leisure drives regularly, usually on weekends, describing such spins as “my relax time”.

His daughter drives the Himiko too. “Probably more than me,” Mr Tham, who also has a BMW ActiveHybrid 7-series, says.

Asked if he intends to add other cars to his collection, he says with a laugh that the strange-looking Mitsuoka Orochi, which is styled like a serpent, has caught his eye. He has yet to track one down – the car is quite rare. However, he is in no hurry, as he says he is having a lot of fun with his two retro rides.