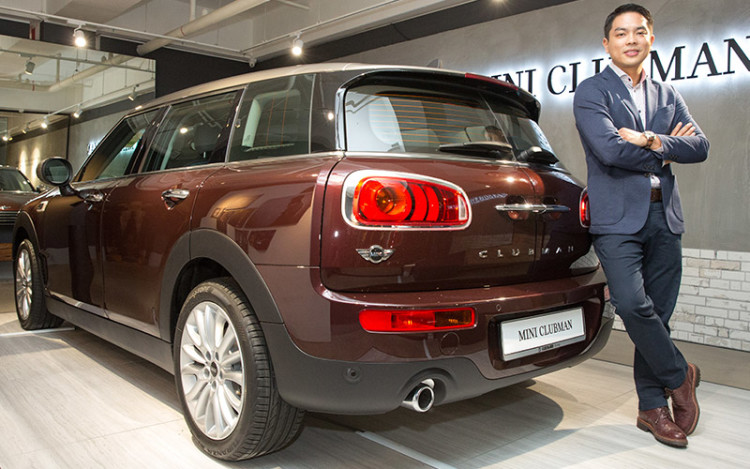 Working for a German firm might seem stifling, especially if you’ve been with a company with a more laid-back culture.

Peter Medalla, however, says that although Germans are known for being serious and precise, they’re also very passionate about their work. He should know – the 43-year-old, who hails from the Philippines, has been with BMW Group since 2005.

Peter began his career with the organisation as a sales manager for BMW Philippines, before moving up to the post of sales director in 2006.

But he wasn’t there for long. In August 2014, Peter left Indonesia for Singapore to head MINI Asia.

Peter speaks to Torque about what it’s like working for MINI, and tells us how the brand will remain true to its roots despite the growing size of its models.

Where were you working before BMW?
I started in the automotive industry with Toyota Philippines as an area manager looking after dealerships. After that, I moved to Ford where I handled fleet and corporate sales.

You could say that I’ve gone “full circle” by working with a Japanese carmaker, an American carmaker and a German carmaker.

How does each company’s culture differ from the rest?
The Japanese are respectful and very detailed. The Americans are a lot more casual, but very bureaucratic. As for BMW, the way they run their business is exactly how they engineer their cars: with a lot of passion.

But at BMW, you must also cross your t’s and dot your i’s. We have to make sure that plans are meticulously thought through before they are executed. It’s a bit like Toyota, actually.

You were in BMW Indonesia for over five years. What was your biggest challenge there?
When I came to BMW Indonesia in 2009, the brand was lagging behind Mercedes-Benz. Our market share was just over 20 percent, whereas Mercedes had almost 70 percent.

How did you turn things around?
We had to do basic marketing. Back then, we didn’t have the right cars – we were selling the 320i and the only available units were silver and black. It was ultra-conservative. We had to fight for other variants.

Then we re-specified our models. For instance, our 5 Series units came with rear-seat entertainment. Normally, you’d only see that in the 7 Series. But in Indonesia, 90 percent of 5 Series owners are chauffeur-driven!

We also had to rejig our communication plans. Initially, we thought BMW had to appear in society magazines, when in fact, nobody reads them. Wealthy buyers actually read newspapers.

Once our dealers/partners realised that we were serious, they started hiring good people. By the time I left BMW Indonesia in July 2014, we became the premium segment leader.

Did you handle anything MINI-related while in Indonesia?
The only MINI-related responsibilities I had then were helping choose the right dealers.

Then I got a call from the regional head at BMW Asia, who said that it was time for me to move, and that he needed someone for MINI. At the time, the brand wasn’t on my radar. But I wasn’t allowed to say “no”. [Laughs]

Did you experience culture shock moving from BMW  to MINI?
I definitely don’t miss wearing neckties! [Laughs] I’m also the only one in the office who can wear jeans! But it’s not about being casual – it’s about having your own style.

And while the cars might be bigger, the go-kart handling will never be sacrificed. We have very passionate engineers that ensure this.

Interestingly, I once did product training in Vietnam and when I mentioned “go-kart handling”, the dealers began scratching their heads. It turns out there weren’t any go-kart tracks in Ho Chi Minh. So I had to show them a go-karting video.

Do you try to be offbeat by doing things differently in the company?
We have a MINI “can do” attitude. It’s a very common tagline among my colleagues. We’re more flexible with our corporate identity.

Internally, we have templates that tell us how to launch a car. But at MINI, we’re encouraged to customise the experience.

Where do you see MINI in five years’ time?
It won’t veer away from its values. The brand will always reinvent itself so that it stays a step ahead of its time.

Which MINI is your favourite?
The John Cooper Works (JCW)! I have three kids and I’m driving the Clubman now. But I’ll be the first to raise my hand and ask for the JCW Clubman when it arrives!

What’s your favourite driving road anywhere in the world?
I love the roads leading from Munich in Germany to Vienna or Salzburg in Austria. They’re very scenic!