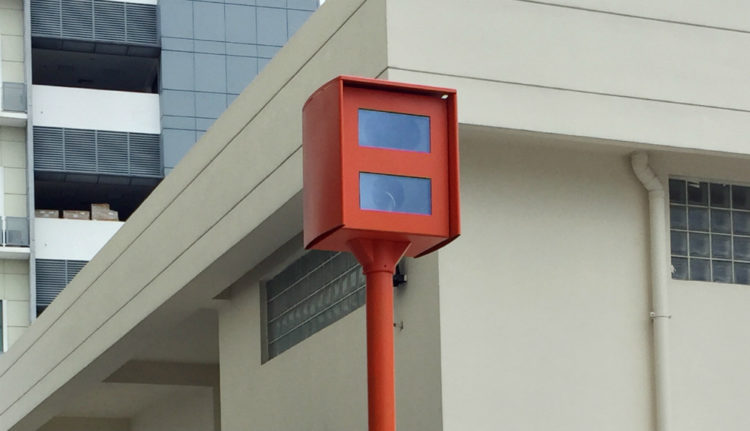 Starting from September 2015, the Traffic Police will start painting digital red-light cameras bright orange, and paste reflective stickers on them – similar to what has been done to digital speed traps. This will be done on all 240 red-light cameras by the end of 2016.

Question: Red-light cameras are falling out of favour in many cities around the world. Should Singapore follow suit and abandon its red-light camera programme?

Answer: Collisions that result from running of red lights at traffic junctions often cause severe damage, injuries and deaths.

Red-light cameras are seen as tools for reducing such collisions through increased traffic law enforcement. Red-light cameras capture images of vehicles that enter an intersection after a traffic light has turned red. These images are used to issue summons to violators.

In Singapore, violators face 12 demerit points and a fine of at least $200 for red-light running. About 10 percent, or roughly 240 intersections in Singapore, are fitted with these cameras.

Red-light cameras are known to decrease the number of red-light-running violations. The Singapore Police Force’s annual report last year found that the number of citations for red-light running at intersections with cameras declined from 18 citations per camera in 2014 to 10 citations per camera last year. Studies of red-light cameras in California, Oregon and Virginia have revealed similar patterns.

Yet in recent years, an increasing number of cities around the world have dismantled their red-light camera programmes. For example, 73 out of 110 cities in California have shut down their red-light camera programmes, many within the last five to 10 years. Some of these cities have gone further by introducing legislation outlawing the use of such cameras.

Where does the opposition to red-light cameras come from?

Many red-light camera programmes generate considerable revenue; some have accused policymakers of introducing such programmes solely to fill state coffers.

This argument is coupled with evidence that despite decreasing the number of red-light running violations, red-light cameras cause the number of collisions at intersections to increase or, at best, remain flat. Such observations have been documented in Singapore, North Carolina, California and Virginia.

Why does this happen?

The increase in the number of collisions is driven primarily by increases in rear-end collisions due to changes in behaviour among some drivers that are unanticipated by others.

In the presence of cameras, some drivers become more apprehensive about entering an intersection during the amber-to-red phase of a traffic light because of the increased probability that they will be cited for red-light running. These drivers brake dramatically to avoid entering the intersection.

By contrast, these drivers would enter the intersection if cameras were not in place. Drivers behind them do not anticipate this change in behaviour, and thus crash into the rear end of the braking vehicle.

Looking only at the effect cameras have on total collisions causes us to view minor collisions as equal to collisions that cause multiple deaths, when in reality the cost of these collision types varies wildly.

A study across 99 cities in the United States found that red-light cameras prevent about a quarter of fatal collisions from occurring.

In addition, a study by engineers in the Department of Civil Engineering at the National University of Singapore found that red-light cameras in Singapore significantly reduce the vulnerability of motorcyclists at intersections, who are more likely to suffer incapacitating injuries or die in collisions.

There is certainly a trade-off being made when cameras are installed, but we should be willing to tolerate an uptick in minor collisions in exchange for reductions in collisions that cause severe injuries and deaths.

Therefore, Singapore should not abandon its red-light camera programme. To placate concerns regarding any surplus revenue from the programme, police could dedicate such funds to other road safety programmes that would further increase traffic safety in the city.