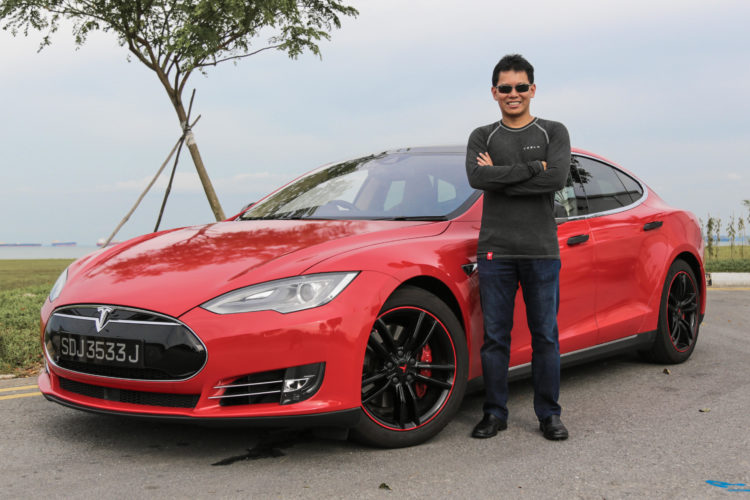 Mr Adrian Peh says he is a “gadget guy” and that was why he fell for a Tesla Model S when he chanced upon it while holidaying in the United States in 2013.

The 45-year-old chief executive of a financial advisory firm recalls being bowled over by how modern the car was.

“The door opened with a light touch. There was a humongous display panel inside – remember, there was no iPad Pro back then. And it was fully electric,” he coos.

Then, in 2016, he bought a used model in Hong Kong and imported it. He does not wish to reveal how much he paid for it, but a less powerful used version that was imported earlier was reported to have cost close to $400,000.

The gadget lover, who buys the latest phones and tablets, says he is impressed with how he can operate the car with a Tesla phone app.

“Recently, I forgot the car key and I was already late for my appointment,” he says. “I unlocked and started the car with the app.”

Last month, while holidaying in Melbourne with his family, a property agent called to say someone wanted to view his investment property in Singapore.

“I told him to drive to where my car was… when he arrived, I remotely opened the boot where I left the keys to the property,” he says. “I locked the car after that.”

The app can also be used to remotely turn on the car air-conditioner and to ease the car in and out of a tight parking space. Such functions are now appearing in other luxury cars.

What thrills Mr Peh most are Tesla’s over-the-air updates. “The updates get me really excited,” he says. “It feels like I’m getting a new car each time.”

Once, he received a notice stating “Air-con updates”. He was puzzled how that was possible, but noticed that the air-conditioning was significantly more powerful afterwards.

The most recent update involves moving the driver’s seat and steering wheel away when the car is parked to make it easier to get out of the vehicle. They revert to their previous positions the next time the car is started up. “That was the most impressive,” he says.

Mr Peh, who is married with two daughters aged 18 and 21, says he is not worried about after-sales service. So far, the car has been trouble-free. And being an electric car, there are few parts to service. Tesla is also able to check the car remotely, he says.

Things which he is likely to have to replace on his own include battery for the key fob, wiper, tyres and brakes. “In the worst-case scenario, I would have to ship it to a nearby service centre,” Mr Peh says. “I am an optimist. I believe it is only a matter of time that Tesla will be here.”

Tesla left the Singapore market in 2011 after six months without selling a single car.

What about the car’s range? Mr Peh notes that a 90 percent charge gives the car a range of 396km. But he has never put that to the test since he charges the car every day.

He says he clocks about 830km a month, and estimates that the car consumes $70 worth of electricity a month. That works out to be about half the average cost of fuel for a similarly-sized petrol car clocking the same monthly distance.

Still, the gadget guy has placed bookings for two Tesla Model 3’s, which could arrive by next year.