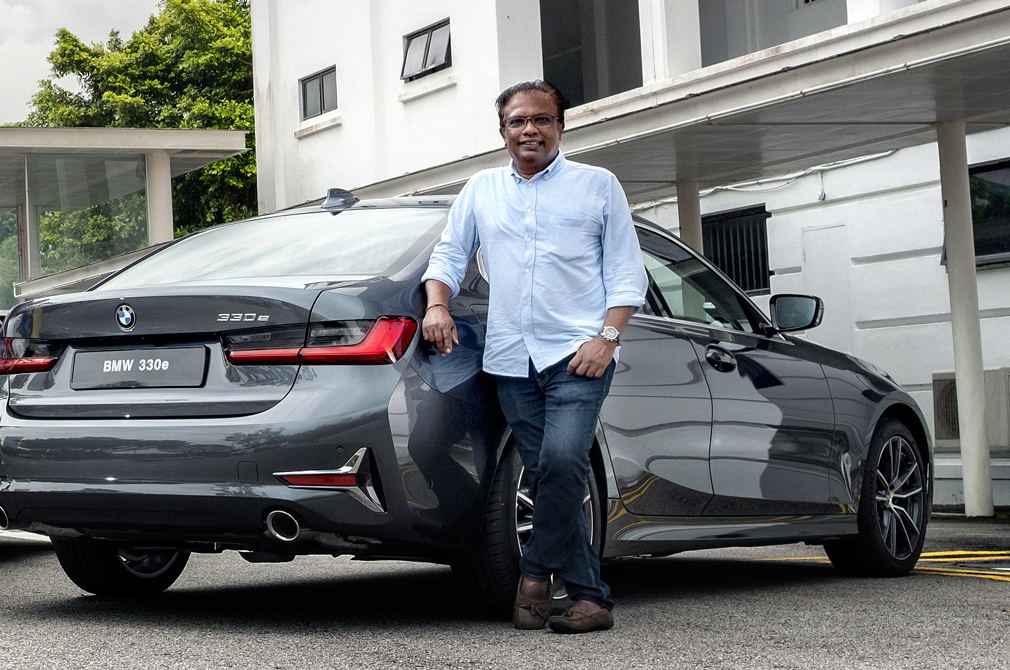 Remember the previous BMW 330i? That was the E90 3 Series sedan with a naturally aspirated 3-litre inline-6. Delectably smooth, supremely responsive and so precisely balanced, it was all the car you needed.

Two generations later, the 330i is still as desirable as ever. While the engine has been down-sized to a 2-litre 4-cylinder, the turbocharging has effectively maintained its power output and performance.

Even more exciting than the 330i is the 330e, a hybrid that proves that performance and efficiency can co-exist, and that they are not at opposite ends of the spectrum.

The “e” in the BMW 330e refers to the fact that it is electrified. There is an electric powertrain in addition to its internal combustion motor.

But the BMW 330e is no ordinary hybrid. Specifically, it is a plug-in hybrid that, as its name states, can be plugged in for its batteries to be recharged.

Its petrol engine is a 184hp version of the 1998cc turbocharged 4-cylinder that is also found in the 320i.

However, what you will not find in any other 3 Series is the compact 113hp electric motor, so cleverly fitted into the 8-speed ZF gearbox that you wouldn’t even see if you had the car lifted on a hoist.

Said motor is mounted between the flywheel and gearbox and dispenses with a torque converter. Hence, the electric motor-drive also benefits from the 8-speed transmission’s different ratios.

As a plug-in hybrid, the 330e always starts off silently with only electric propulsion. If the eDrive option is selected in Electric mode – one of three drive-modes available – the car will continue with pure electric propulsion up to a maximum speed of 140km/h. 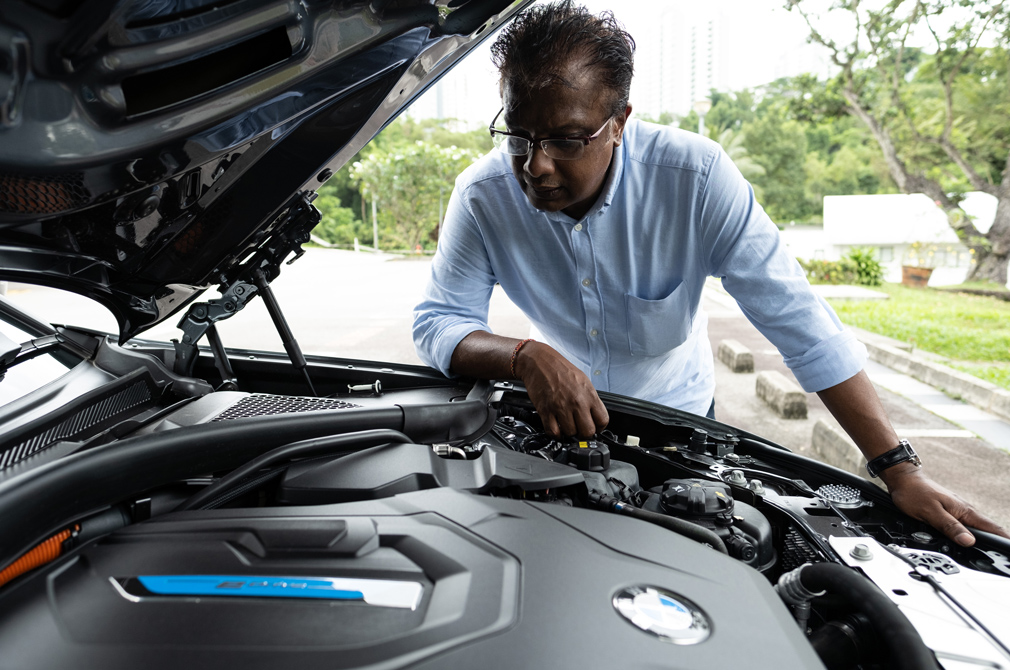 You won’t see the electric motor here, as it’s neatly integrated with the 8-speed automatic gearbox.

When driven less exuberantly, BMW says the 330e will run a distance between 59 and 66 km on a full battery before the turbocharged engine is needed.

A full charge will require plugging-in the 330e and the basic home-installed wall box unit with 3.7kW capacity needs about 21/2 hours to attain 80% charge if you start from minimum level.

It is in Hybrid mode that the 330e seamlessly engages the best combination of electric and petrol-powered drives to achieve optimum fuel economy and minimal emissions.

Energy recuperation when coasting downhill and during braking helps replenish the battery. This will probably be the default drive mode for most owners, for it offers the efficiency expected without detracting from the famous 3 Series ethos.

It makes sense to charge the batteries every day if your daily commute is around 50km. Then, you can always run in Electric mode and never really have to consume petrol. I soon realised that in the city, the car works perfectly in this mode, being responsive, smooth and silent.

For keen drivers, this is a BMW after all, so Sport mode is the way to go. In the BMW 330e, there is a feature called XtraBoost that tells the electric motor to release its last 40hp.

Available in kickdown even in Hybrid mode, XtraBoost is what gives the car its immediate and rapid acceleration. Peak power rises from 252hp to 292hp, and zero to 100km/h takes just under six seconds. 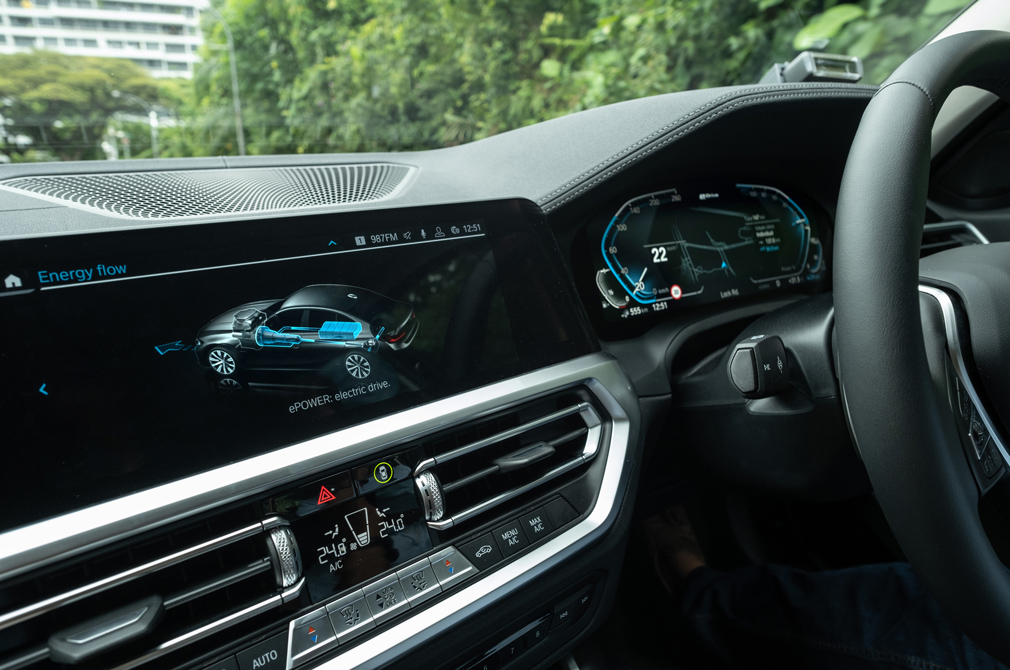 In ePOWER mode, the BMW 330e is powered solely by electricity, which means zero tailpipe emissions.

Accelerating from low speeds, the BMW 330e feels as rapid as its 6-cylinder sibling, the M340i, thanks to the immediate torque delivery of the electric motor.

At the same time, the extra weight as a result of the hybridisation has done nothing to blunt the famous 3 Series balance or poise in any way. Best of all, the low fuel consumption figures are something that always put a smile on my face.

If you are wondering why the total system power does not equal the sum of the engine’s and motor’s individual peak outputs, it is because the two power-units are at different speeds when delivering their respective maximum power.

The BMW 330e carries more than 200kg of extra weight due to the electrification hardware which includes the 12kWh battery, but the e-motor more than compensates for this.

And the car’s dynamics are undeniably of the usual and much-admired 3 Series standards, as is the high quality inside and out. Making the 330e even more desirable is the fuel efficiency that could average as low as 2.2L/100km.

Today’s BMW 330e delivers power, handling and efficiency in one handsomely designed package. Indeed, this is all the car you need. 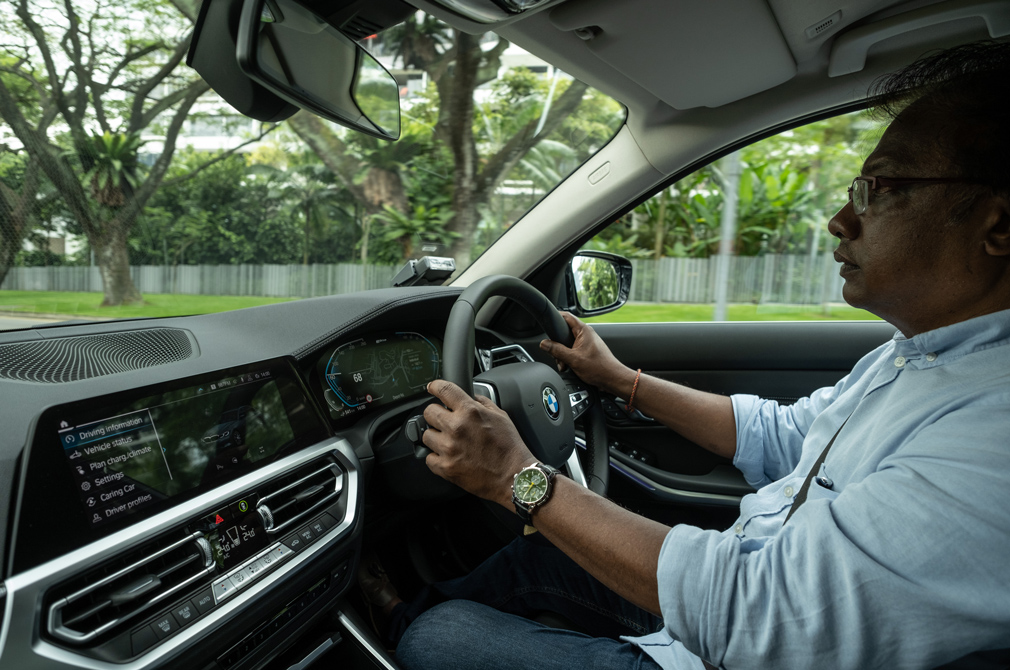 Looking for even higher performance? Click here to read about the BMW M340i xDrive
Here’s why the BMW 318i is no basic model
Head here to find out more about the BMW 330e