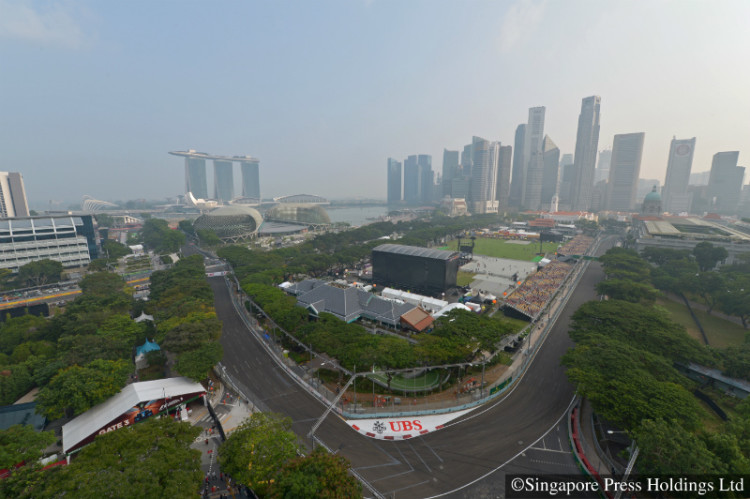 A view of the Padang and the Central Business District (CBD) as seen from Swissotel The Stamford.

Singapore’s Civic District and Central Business District were unusually teeming with cyclists and joggers on February 28, when a few thousand people poured onto the streets for the first Car-Free Sunday SG.

Roads around the Padang were closed to traffic for a few hours in the morning, in a pilot trial that will take place on the last Sunday of each month till July.

National Development Minister Lawrence Wong said such an initiative could be expanded and become a permanent fixture if the response from the public is good.

Describing the turnout as encouraging, he told reporters: “We will look at how we can improve for the future editions. If the response gets even better and we get more people participating, I think we would certainly want to continue beyond the six months and see how we can expand our car-free Sunday to a bigger area, potentially even make some of it permanent.”

Mr Wong stressed that this will depend on how Singaporeans respond to the ongoing trial.

“It’s really to get people used to the mindset that streets and roads can be free of cars.

“It’s not just about closing up the roads, but (also that) the streets can be full of programming that we can enjoy. We can walk, we can cycle, we can come together.”

Car-Free Sunday is part of a move to transform Singapore into a car-lite nation. Those who showed up yesterday took full advantage of the closed roads, which included St Andrew’s Road, Connaught Drive and Fullerton Road. Two to three lanes on Shenton Way and Robinson Road were also made car-free from 7am to 9am.

Cyclists and in-line skaters zipped freely along the 4.7km stretch of closed or partially closed roads, while others ran or strolled, taking in sights like the Anderson Bridge and Marina Bay Sands.

Patent examiner Jaydon Lee, 38, was at the event with his dog and neighbours. He said: “It’s good that we can cycle freely without worrying about cars. We usually cycle together to East Coast Park. But the atmosphere is more fun here with more people.”

Mr Nordon Lim, 58, head of the Jalan Besar Community Club Healthy Lifestyle Club, turned up with 50 members of the club. Said the owner of a rubber seal rings company: “I like that we get to slow down and take in all the scenery here. It’s not something we would be able to do if we took a bus or car.”

With thumping music in the air, others flocked to public spaces along the route, taking part in activities such as zumba, yoga and tennis.

Some chomped on salted egg yolk fries and roti john from food trucks, while children were kept busy in bouncy castles and watching clowns perform tricks.

Housewife Cindy Cheng, 44, and her husband took their four children to the event, which she described as a good opportunity for family bonding. “We are an active family, and like to expose our kids to the outdoors as much as possible. The event was up to our expectations and we will definitely come again.”

From 9am to noon, crowds began to thin as some roads reopened to traffic, leaving many at the event pining for more car-free time.

National University of Singapore architecture student Rahmat Khairudin, 24, who was there to explore building designs in the Civic District on foot, said: “The roads should have been closed for a longer time. It would also be nice if there are more guided heritage tours.”