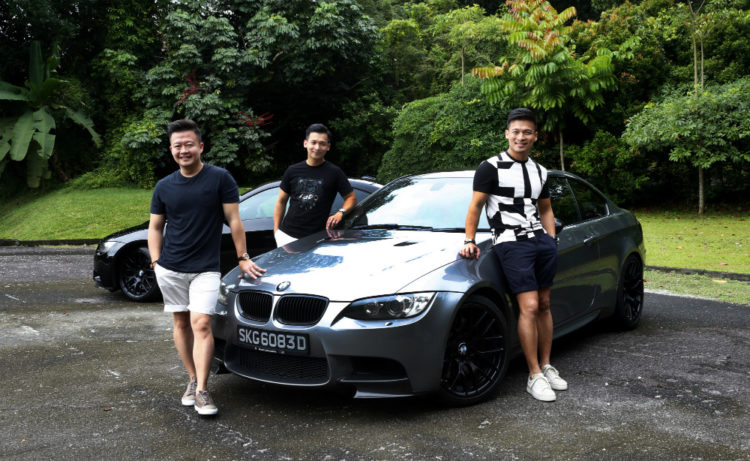 Brothers (from left) Amos Poh, Wen Yi and Adrel drive BMW M3 coupes. The grey M3 belongs to Amos and the one behind belongs to Wen Yi. Adrel drives a black M3, which was at the workshop on the day of the photo shoot.

The Poh brothers – Amos, Wen Yi and Adrel – not only work for the same company, but they also have the same taste in cars. Colleagues in the Singapore office of an Australian property firm, they each own a BMW M3 coupe, all of which they bought second-hand last year.

Adrel, 34, was the first to get the car. The business development director test-drove the M3 coupe more than five years ago at BMW M dealership Munich Automobiles.

“I really love the torque and how the car looks, but it was too expensive brand new,” recalls Adrel, who was then driving an Audi A4 sedan.

While he did not buy the car, which cost more than $400,000 at the time, he kept in touch with the salesman, Mr Arthur Wong, who had done national service with him.

In February last year, he was itching for the M3 again, so he asked Mr Wong if there were any used M3s on sale. It so happened that he had a customer who was looking to sell a black M3 coupe registered in November 2011.

After taking it for a spin, Adrel bought the car, which was still under warranty, for $160,000.

His older brother Amos, 38, an operations director, was car-shopping at the time. He had gone along for the test-drive and was impressed with the car as well.

“I researched online and found that BMW had replaced the 4-litre V8 engine of the M3 with a 3-litre engine,” he says. “This is the last of the M3 with the V8 engine. I decided I wanted the car too.”

He was then driving a Mercedes-Benz C180. With Mr Wong’s help, he found for sale a dark grey M3 coupe registered in September 2011, for which he paid $8000 more than his brother did for his.

“But it is all right because the car’s condition was really good,” he says.

By March last year, Amos and Adrel were driving the M3 coupe and they decided to get Wen Yi, who is Adrel’s twin, interested in the car too.

Wen Yi, who handles business financing in the firm, recalls that in April last year, his brothers had insisted on the trio going for lunch together after a meeting.

“As we walked to the carpark, I saw a black M3 and Arthur was waiting there. My brothers insisted that I drive the car. They set me up,” he says.

But he, too, fell in love with the car. He sold his Mercedes-Benz C180 and paid $165,000 for the M3, which was registered in April 2011 and came with a warranty extension till April by Munich Automobiles.

When asked why they went for the M3 coupe instead of the sedan, the brothers replied in unison: “It is more stylish.”

Amos and Wen Yi use the two-door coupe as a family car. Amos has a one-year-old son while Wen Yi is married and has no children.

Adrel has two sons aged eight and six. He also has a Land Rover Freelander to ferry the family around.

Amos and Adrel took their M3s to the Sepang International Circuit in November last year, but the track novices say they were out of their element there.

“The Suzuki Swifts and Hondas were overtaking us because we did not know what to do,” recalls Amos.

The three brothers are planning to go to Sepang again, this time with the BMW M Club, which has about 200 members in Singapore.

They volunteered their services with the club in the middle of last year. Amos handles the marketing, including an ongoing revamp of the website, Wen Yi manages the membership and Adrel oversees sponsorships for the club.

“Marketing, membership and money for sponsorship – three Ms,” Amos says with a laugh. “We are like brothers-in-Ms.”