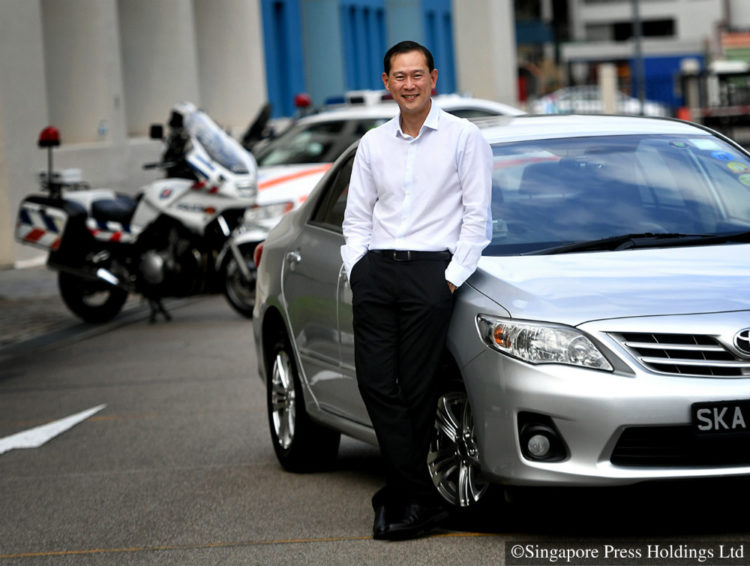 The traffic chief drives a nondescript six-year-old Toyota Corolla Altis. He has never chased down a road bully or reckless driver in the course of his daily commutes from his home in Balestier to the Traffic Police headquarters in Kampong Ubi.

“We’re not encouraged to do that,” the 47-year-old says. “But I have asked my men to act on infringements captured by my car camera.”

He describes his car as “practical and fuel-efficient”, not unlike the other Japanese cars he has owned.

“The ride is comfortable and it has good road noise-proofing,” he says. “But the steering is a bit light. On the whole, it is a good car for people who want frugal and trouble-free transportation.”

He clocks about 16,500km a year, slightly less than the annual average, and professes to never having broken any traffic laws.

“I see the fatality reports which land on my desk,” he says of the sobering stats. “So I’m mindful of being safe on the road.”

He keeps strictly to speed limits, always stops before a white line and signals turning intentions well ahead of time – even when there is no one behind him.

But when probed further, he confesses that he may have parked illegally “once or twice before I came over to Traffic Police”.

Before assuming the helm in 2014, he headed the Airport Police and before that, the Police Coast Guard.

His wife, a 45-year-old civil servant, drives a Honda Jazz. They have two children – a daughter in Secondary 4 and a son in Secondary 1.

“They don’t want to be police officers,” he says.

“I’ve always wanted to be a policeman. It’s been my childhood dream. I guess it has to do with all the police movies I watched.”

Right after graduating from Nanyang Technological University with a degree in accountancy, he signed up with the Singapore Police Force in 1994.

Today, he has 700 officers and 200 vehicles under his command. One of his main concerns remains motorcycle fatalities. Based on their population, the number is disproportionately high.

So it worries him that his dad, in his 70s, still rides his Vespa scooter.

“I tell him, I will take away your licence. But he says, no, you don’t have the right. And he’s right,” he says with a laugh.

He adds that more pedestrians and cyclists are involved in accidents now.

To make the roads safer, the Traffic Police will introduce Average Speed Cameras along the new Tanah Merah Coast Road early next year.

The cameras calculate a vehicle’s average speed by tracking it on radar when it enters a monitoring zone.

Like all new speed cameras, they can distinguish between a lorry and a car, and tell if the vehicle has been exceeding its speed limit.

But more than enforcement, Mr Tee believes a bit of graciousness goes a long way.

“We tend to be very legalistic on the road. This is my right of way and that’s that,” he says. “The roads will be safer if people do what is right and not just what is legally required.”

To this end, he reveals that the Traffic Police will be launching a road graciousness campaign next month with the Singapore Kindness Movement.

“If we are capable of giving way to others on trains, buses and elsewhere, we are likewise capable of doing so on the road,” he says.

As for his next car, he would only say: “I hope to drive an electric car some day.”