Ten years ago, Mazda launched the first-generation 6, which not only heralded a snappier model nomenclature for the Hiroshima automaker (6 instead of 626,

3 instead of 323, 2 instead of 121), but also introduced “Zoom-Zoom” to motorists. This cute tag line, with a catchy tune to match, aims to play up the fun-to-drive characteristics of Mazda cars.

And there was real vroom behind the initial burst of “Zoom-Zoom”, thanks to Mazda’s signature sports cars – the MX-5 roadster and the RX-8 rotary coupe. Further boosting the street cred of “Zoom-Zoom” were turbocharged 2.3-litre, 6-speed manual MPS (Mazda Performance Series) variants of the 3 hatchback and 6 saloon, the latter even having all-wheel drive. Even though the 6 MPS wasn’t exactly a rival to the mighty Mitsubishi Lancer Evolution 10, it was definitely in the same “exciting executive” league as the Subaru Legacy B4 GT spec B.

The second-generation 6 made its international debut in 2007 and came to Singapore in early 2008. Prettier, roomier and better to drive than its predecessor, the model took the “Zoom-Zoom” philosophy so “seriously” that the jingle would chime when you start up the engine (the sound could be disabled, thankfully). Two years later, the car was updated, with tweaks made to the exterior, dashboard, suspension and steering. The update was timely, too, what with fresh rivals such as the Suzuki Kizashi and the Kia Optima. 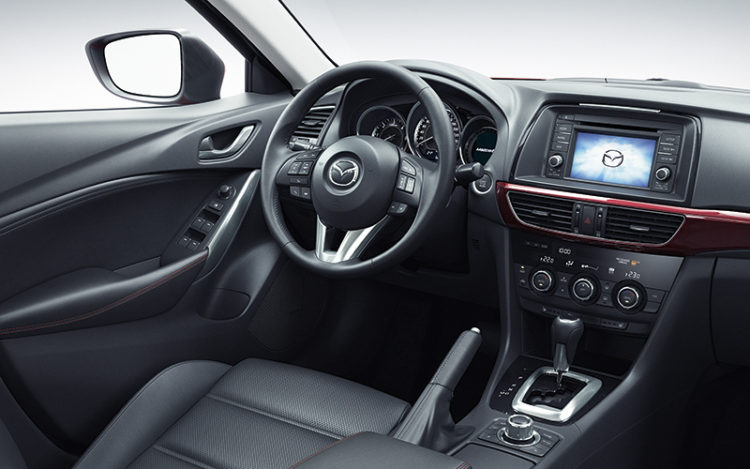 The latest, third-generation 6 shoulders a heavier responsibility than ever before, having been anointed as Mazda’s flagship. Yes, the car that flies the flag for the Japanese carmaker is neither the 8 nor the CX-9 – it is the new 6. All of Mazda’s current automotive know-how, headlined by its Skyactiv technology, has therefore been invested in the newcomer, along with Mazda’s unique understanding of Jinba Ittai (“horse and rider unified as one”) and Kodo (“Soul of Motion” design theme). The end result is a roomy “Zoom-Zoom” saloon that seeks to inject some va-va-voom into your vrooming.

The vehicle is well groomed, too. Of course, the 6 doesn’t have fancy doors like the RX-8, and isn’t as low-slung as the MX-5, but it has curves in all the right places (the swoopy front fenders being most “right”), purposeful twin tailpipes and nice xenon headlights. Said lights are also the first on a Mazda to incorporate LEDs and “halo rings”, and they can swivel to follow the curve of the road. The standard alloy wheel size is 17-inch, with the optional upsize going straight to 19s.

The factory’s paint shop even formulated a special shade of red for the 6. Called Soul Red, it has more chroma, greater contrast and richer depth than all the other “Red” paint jobs in Mazda’s palette, which include Classic, Copper, Vintage and Velocity. Viewed in the metal, Soul Red is indeed vivid, to the point where the other paintwork colours for the 6 look a bit weak, even the “sporty” tones such as Blue Reflex, Meteor Grey and Jet Black.

The 6 has grown bigger, too, and it is now more like a size “7”. At 4.87m in length, it is almost as long as the BMW 5 Series, and its 2.83m wheelbase is a bit longer than the 3 Series’. Despite the substantial increases in dimensions, the new four-door weighs around 100kg less than the old one (like removing a passenger with long-haul luggage) and about 200kg less than Ford’s recently unveiled Mondeo (depending on equipment). This is the tangible weight-saving aspect of Mazda’s Skyactiv strategy. 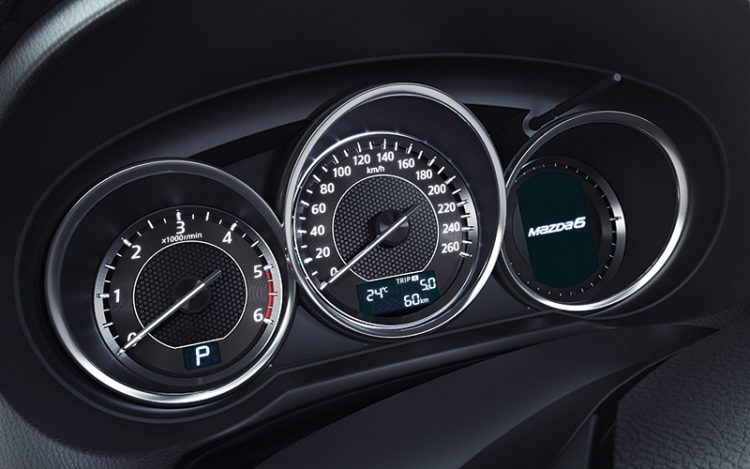 Three binnacles in place of four, and clean white lighting instead of the old set’s cheesy blue-and-amber illumination.

Not only is the 6 body lighter than before, it is also claimed to be a significant 30 percent stiffer. It cuts through the air more smoothly, too, with a low drag coefficient of 0.26.

The improvements to the interior are even more dramatic than the exterior restyle. The previous cabin isn’t totally successful in combining typical Japanese convenience with believable European ambience, but the latest cabin has nailed it. The upgrade from yesterday’s 6 cockpit to today’s is like jumping from a Toyota into a Lexus – it’s still mass market, but it appears more upmarket.

The materials and workmanship are some of Mazda’s most impressive to date. The leather seats, available in off-white or no-nonsense black, are supportive and carefully stitched, and even the basic fabric upholstery is woven with care. Most of the plastics are soft to the touch, the glovebox lid feels solid and all the switches are tight, except for the air-con vents’ thumbwheels (their tightness varies from one test car to another, but these are pre-production after all). And the overhead grab handles no longer snap back into place like the previous 6 – they glide back.

Cabin space has also been improved. Not that the earlier 6 is cramped, but the new number is noticeably roomier, particularly for rear occupants. They sit more comfortably, too, thanks to the longer cushions, taller seat-backs and wider centre armrest. They also get air-con blowers in the middle and storage pockets in the doors – these are missing from the old 6. Boot space has been reduced by a bit, however, and the front door bins can hold a 1-litre bottle but not much else. 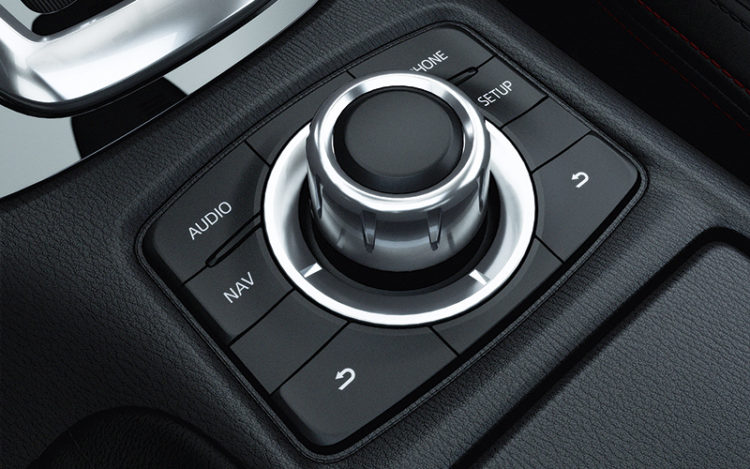 This knob is Mazda’s idea of iDrive, but with fewer functions and sub-menus.

In the “toys on board” department, there is a user-friendly 5.8-inch infotainment touchscreen, a chunky rotary controller for said device, an accurate and easily updated sat-nav (supported by TomTom), and a top-notch Bose hi-fi with 11 speakers. The stereo is not only louder and more sophisticated than the old one (again an option by Bose), it is also more energy-efficient and 20 percent lighter.

There are the usual USB, auxiliary and Bluetooth connections for the road warrior, but the hands-free feature offers a useful bonus – the ability to receive, display and even read out SMS and e-mail messages from a connected smartphone.

There is more good news for the fella behind the wheel. His seat has been given a generous range of adjustment, and the new organ-type accelerator pedal is easier to operate/modulate than the conventionally hinged old pedal. Outward visibility has also been enhanced – the A-pillars and the enlarged, relocated side mirrors allow clearer viewing angles, while the optional Rear Vehicle Monitoring (RVM) helps to keep an (electronic) eye on the 6’s blind spots.

RVM is just one of the driving aids bundled under an advanced safety package called i-Activsense. The accompanying gadgets meant to avert an accident in the first place include Lane Departure Warning, Forward Obstruction Warning, Smart City Brake Support and Mazda Radar Cruise Control (MRCC). Similar systems are already employed by other major carmakers, so they are hardly a novelty, but the 6 offers something else none of them has. It’s called i-Eloop. 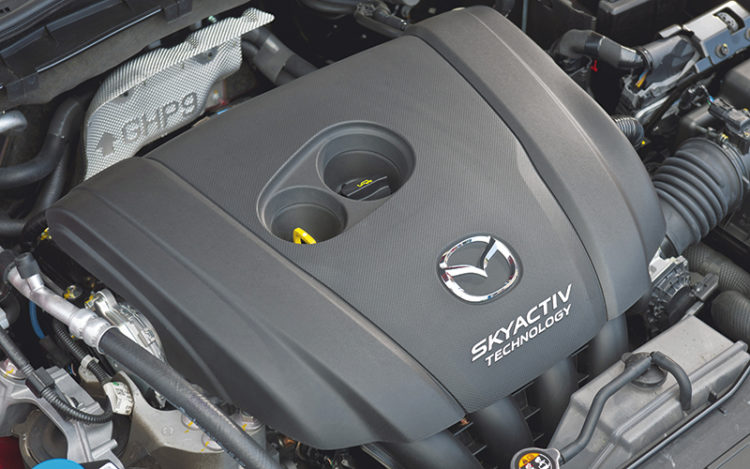 Both the 2-litre and 2.5-litre engines are smoother and more powerful than their non-Skyactive predecessors.

Short for Intelligent Energy Loop, this is Mazda’s own take on brake energy regeneration. Every time the 6 decelerates, kinetic energy is captured and stored in a supercapacitor that, when fully energised, runs the vehicle’s electricals (e.g. air-con, audio and headlamps) for a minute. As little as 7-10 seconds of deceleration is enough to recharge the electric double-layer capacitor completely.

The i-Eloop system reduces the workload on the battery and extends its service life, at the same time increasing the car’s fuel efficiency in urban conditions. Saving fuel, too, is the idle-stop system, simply called i-stop and claimed to have the quickest restarts in the industry.

Quick, and fairly slick, is every auto restart of the temporarily “sleeping” engine. But for the road test proper, “I go” is more important than i-stop, so I switch it off and concentrate on how the 6 goes.

At the product presentation prior to us hitting the countryside roads on the outskirts of Paris, both the chassis manager and the powertrain engineer emphasised two keywords – “precise” and “responsive”. After sampling the manual 2-litre wagon and automatic 2.5-litre saloon, I conclude that the 6 does possess these attributes, but not to the extent of behaving like a Miata with four doors and a notchback. 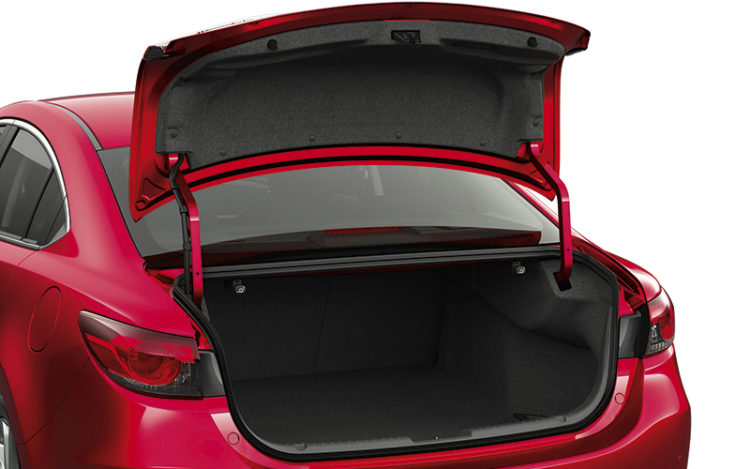 Cargo capacity of 489 litres has lost 30L and original gas struts, but gained proper levers for the split-fold quick-release.

Like delectable French macarons, both of the 6’s drivetrains are creamy, and they provide a sweet experience. Although the horsepower deficit of the 165bhp 2-litre is obvious, it revs even more enthusiastically than the 192bhp 2.5-litre and it sounds happier above 5000rpm. The 2L engine’s rev limiter is also gentler than the 2.5L’s, it seems.

The manual gearbox is fantastic, with crisp shift strokes and highly positive “rifle bolt” engagement. It’s a flick-of-the-wrist affair like in the MX-5. Of greater relevance to the Singapore market is the 6-speed automatic, which not only has one more ratio than the previous auto but also fires through the gears in a faster fashion.

At the same time, the pair of handy paddle-shifters are a lot more straightforward compared to the defunct four-tab arrangement, which also requires the console lever to be slotted into M before the tabs start working. There’s no need to do this with the new transmission – you can play with the paddles “immediately”, although the autobox reverts to D if you stop playing for a while.

The semi-auto gate still sticks to the “reversed” orientation (“+” behind “–”) preferred by Mazda, BMW, and keen drivers who know that knocking the lever forward to downshift feels more natural than doing it backward, especially when slowing down hard for a corner. 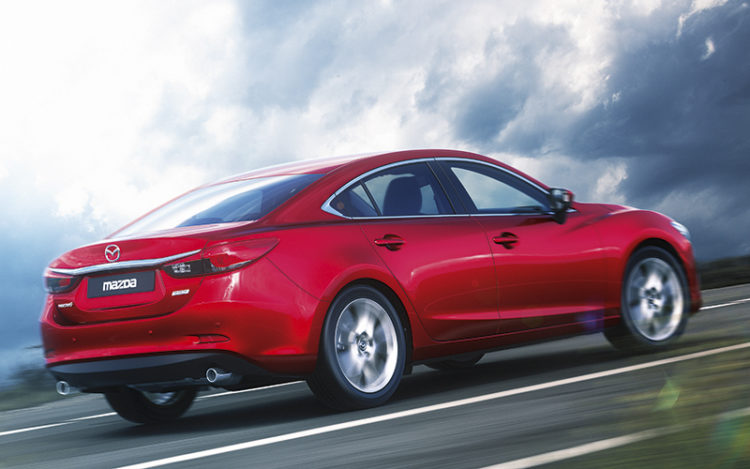 Not quite a BMW 6 Series Gran Coupe from Japan, but it’s stylish and properly assembled.

Braking in the 6 is faultless. There is ample stopping power for every situation, and the brake pedal is perfect in its placement and travel. The 2.5-litre model is capable of over 220km/h and a sub-8sec century sprint, so these excellent brakes are necessary.

The car also scores on handling, just like its agile forerunner. Even though the electric steering feels detached from the action, it is well weighted and it carries out directional changes without slack, while front-end grip is more than decent. The 6 doesn’t handle like a full-blown sports saloon, but it can probably outpoint a Passat and pace a Mondeo (one of the best-handling cars in its class) without going out of its way to do so.

As for ride quality, the 6 is quiet and cultured, with an underlying firmness, and it suffers much less road noise than its predecessor, even on 45-profile R19 tyres. Drivers and passengers alike can cruise quickly all day in this car without feeling fatigued.

If you’re feeling intrigued by this “Zoom-Zoom” saloon, you don’t have to wait long to find out for yourself, because Mazda’s high “six” drive will be arriving in Singapore by Christmas. 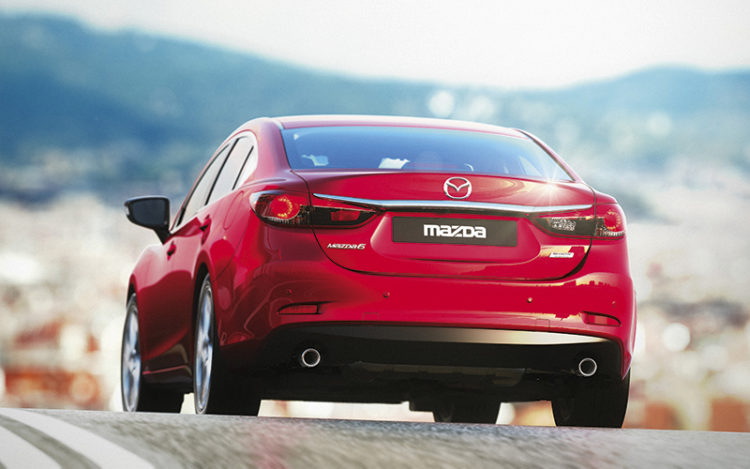 This well-groomed “zoom-zoom” saloon injects va-va-voom into your vrooming.

Mazda 6 is an executive saloon with a sporty soul
Check out the updated 2017 Mazda 6 2.5 here