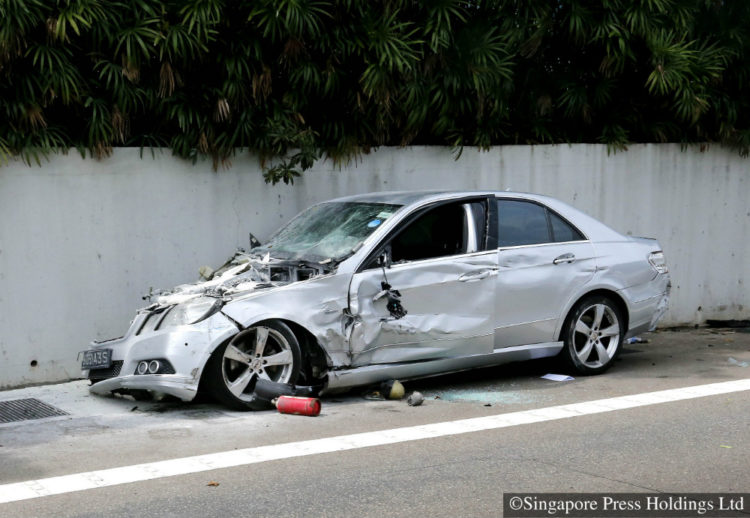 Businessman Lim Chai Heng, who drove a silver Mercedes-Benz that caused an accident on the AYE, was charged with causing death by reckless or dangerous driving.

Mr Lim allegedly drove a Mercedes-Benz car at high speed against the flow of traffic before ramming into a car, killing its driver. He was charged in hospital on Tuesday (Dec 20).

Mr Lim is accused of causing the death of Mr Liong Kuo Hwa, 37. The accident happened about 2km from the Tuas checkpoint.

The charge says that he went against the flow of traffic, thus resulting in a head-on collision with Mr Liong’s Toyota Vios which was travelling towards Tuas checkpoint.

A Chinese interpreter read the holding charge to Lim, who has been warded in National University Hospital for injuries.

Mr Liong, also known as Jackie, was a media personality who had appeared in several films, television programmes and commercials. He was pronounced dead at the scene.

His 37-year-old wife, who was in the car, was injured and warded in hospital along with two others – a motorcyclist and his female pillion rider – who were injured after being hit by the Mercedes.

The Straits Times (ST) understands that Lim owns a printing business, operating from a unit at Kallang Bahru Industrial Estate since 1993.

Lim will be remanded at the Institute of Mental Health for psychiatric assessment after his discharge from hospital. The case will be mentioned in State Courts on Jan 3.

The maximum punishment for causing death by dangerous driving is five years’ jail.