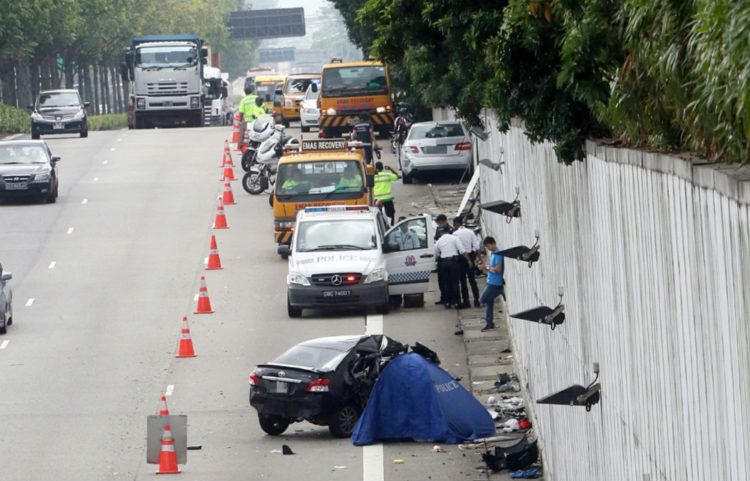 According to a Facebook post by road safety interest group Beh Chia Lor, a Mercedes-Benz had allegedly gone against traffic, causing the massive accident along AYE towards Tuas, before the Tuas West Road exit.

Grab driver Lim Wee Teck, 51, was driving a passenger to Tuas when he witnessed the accident.

“There was a loud bang, and then smoke and debris flew up into the air, on the road ahead. The Mercedes driver was driving in the wrong direction,” he said.

“I quickly swerved to the left and stopped, and told my passenger I was going to help. The engine of the Mercedes was on fire, and we were worried it might explode. As there were buses behind my car, I took fire extinguishers from them to put out the flames. It took four extinguishers before the flames were put out.”

Mr Lim said the driver of the Mercedes seemed out of sorts and was mumbling to himself. His son was with him in the front passenger seat. Mr Lim remained on the scene for about 20 minutes before leaving, as he had to send his passenger to her destination.

A video posted on Beh Chia Lor captured the dramatic trail of destruction left by the accident, with a silver car sitting on the left-most lane, facing the wrong direction. The front of the car is crumpled, and the wall of the expressway is severely damaged.

Further down the road, the video captured a stationary black car on the right lane, with a fallen scooter lying against it and a conscious woman is lying on the road about 3m in front of the vehicles.

The left-most lane also has a car flipped on its side as well as another black car, with a smashed bonnet and rear backed against two holes in the expressway wall.

A very graphic dashcam video, which captures the accident, has gone viral online.

The Singapore Civil Defence Force (SCDF) was alerted to the accident at about 8.05am. It dispatched a fire engine, a Red Rhino, two fire bikes, a support vehicle and four ambulances to the scene.

The accident involved four cars, a motorcycle and a bus, according to police.

A 37-year-old man was found trapped in the driver’s seat of a car, and was extricated using hydraulic rescue tools. He was pronounced dead by paramedics.

Another two women and two men, aged between 34 and 53, were taken to National University Hospital, and the hospital was alerted to be on standby to receive them.

The Straits Times understands that one woman was the passenger of a Toyota Vios, while another man and woman were the rider and pillion rider of a motorcycle respectively.