Audi has given the world a look at the latest addition to its e-tron electric car range, in the form of the four-door e-tron GT concept coupe.

A grand tourer with the heart of an electric sports car, Audi says its latest barnstormer will see volume production in “around two years”. 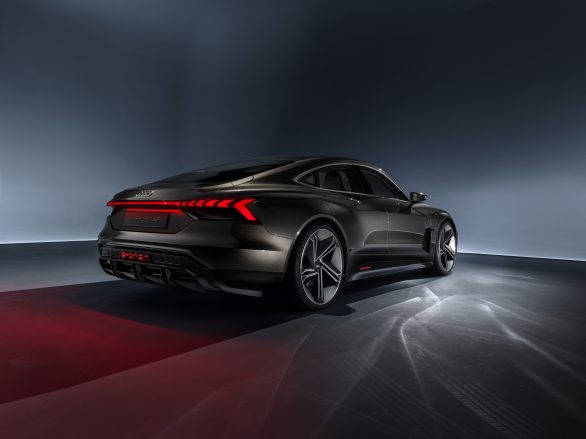 The Audi e-tron GT concept is crafted through a “multi-material” process – the roof section is made from carbon and aluminium. The technology for this concept was developed closely with Porsche, Audi said.

There is no mechanical link between the front and rear axle, and the electronic control system coordinates drive between axles and left and right wheels.

What is an Audi e-tron?

When the Audi e-tron GT concept finally reaches production status, the car should dispatch the century sprint in “around 3.5 seconds”, Audi said, and blaze through 200km/h in just over 12 seconds.

A flat-floor architecture makes for a low centre of gravity and a nimbler car, while Quattro permanent all-wheel drive with torque vectoring tames the 590hp (434kW) motor. 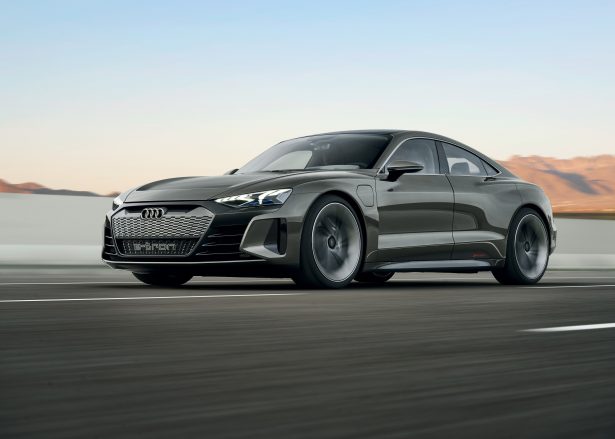 The Audi e-tron GT concept will be limited to 240km/h to maximise the car’s range.

The e-tron GT concept can repeat its head-whipping acceleration with no problem, thanks to sophisticated cooling technology.

All that power can be topped up in two ways. The Audi e-tron GT concept can either be charged via a cable connected behind the flap in the left front wing, or through contactless induction via Audi Wireless Charging.

With Audi Wireless Charging, a charging pad with an integral coil is installed permanently on the floor and connected to a power supply.

When the Audi e-tron GT concept is parked over the coil, the alternating magnetic field induces an alternating voltage in the secondary coil fitted in the floor of the car, across the air gap.

With a charging output of 11 kW, the Audi e-tron GT concept can be fully charged conveniently overnight, Audi said. 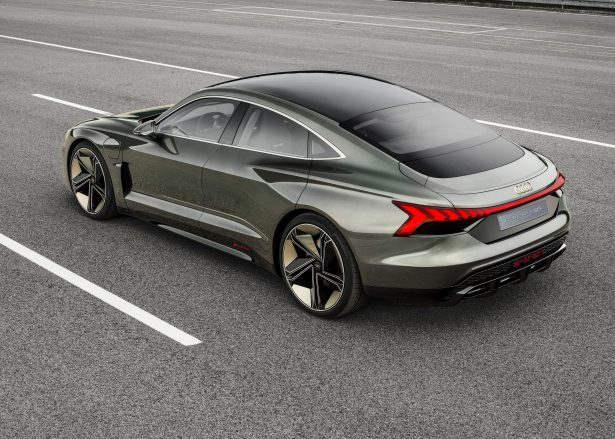 Audi’s super electric concept car can be charged either via a wired connection, or a wireless charging pad.

The laws of physics still apply, however, and the 800-volt wired charging system will substantially reduce charging times compared to wireless charging. The Audi e-tron GT concept can be recharged to 80 percent in around 20 minutes, the German automaker said.

Inside, technology underpins the soul of the Audi e-tron GT concept, with both the central instrument screen and the touchscreen above the centre console finished in black.

The car’s upholstery follows its eco-friendly bent too. Synthetic leather is used on the Audi e-tron GT concept’s seats and other trim surfaces. Fabrics made from recycled fibres are used on the seat cushions, on the armrests and centre console. The e-tron GT concept’s interior is made from recycled material, in keeping with its environmental credentials

In addition, the headliner is wrapped in microfibre material and the trim surrounding the window pillars.

The deep-pile floor carpet is made from sustainable Econyl yarn, a recycled fibre made from used fishing nets.