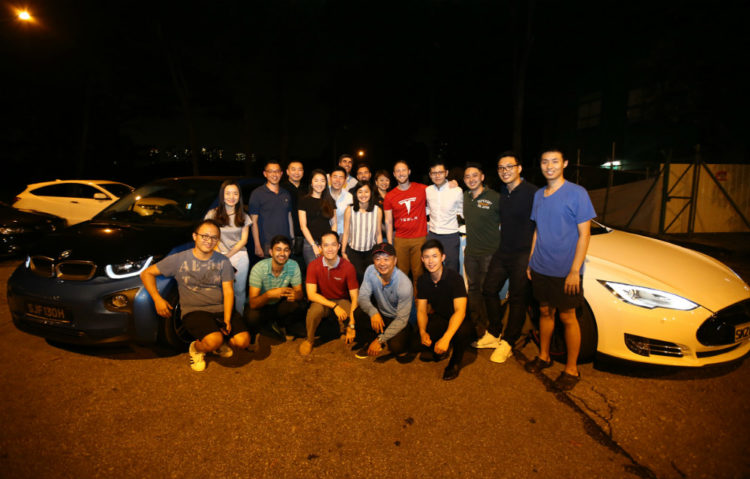 A gathering for electric vehicle enthusiasts organised on Friday at Dempsey Hill by the EV Association of Singapore, which grew out of a Facebook group called Singapore EV Enthusiasts. The electric car population in Singapore increased sevenfold last year, buoyed in large part by the entry of electric car-sharing firm BlueSG last month.

Electric vehicle (EV) owners and enthusiasts have banded together with industry players to push for the greater adoption of such vehicles in Singapore.

Called the EV Association of Singapore, the group aims to engage the Government – as well as other stakeholders such as building owners and automotive companies – over their concerns. The group, which currently has about 10 members, grew out of a Facebook group called Singapore EV Enthusiasts, which has around 1000 members.

The electric car population here increased sevenfold last year, buoyed in large part by the entry of electric car-sharing firm BlueSG last month, which currently has 80 vehicles here. The number jumped from 12 at the end of 2016 to 93 as of November last year, according to figures from the Land Transport Authority (LTA).

In the second half of this year, the LTA will roll out 50 Volvo diesel-electric hybrid buses, worth about $30 million in total, as part of its efforts to make public buses here more environmentally friendly.

Last month, it also called a tender to purchase 60 electric buses, which are expected to roll out by next year.

Electric vehicles are cleaner and have better performance than their petrol counterparts, said the group’s president, Mr Terence Siew, 34.

He added that Singapore’s small size, well-developed electrical grid and Smart Nation ambitions make it perfect for electric vehicles. “Electric vehicles fit right in, but they’re not as popular as they should be,” said the regional manager for electric charging solutions firm Greenlots. “We want to work with the Government, to provide an industry perspective on how policies affect electro mobility.”

The association’s vice-president, sales manager Paul Welsford, noted that electric vehicles are also becoming more popular worldwide. “Seven or eight years ago, the landscape was very different. Now, every single car manufacturer has an EV coming out,” said the 32-year-old, who has reserved a Tesla Model 3.

Electric cars are also becoming more affordable, he said, pointing to models such as the Hyundai Ioniq Electric and the Nissan Leaf.

Countries such as Norway and France have already announced plans to make their vehicle populations all-electric.

Said Mr Siew: “Other countries have done it, so we believe Singapore can do it as well.” The Vehicular Emissions Scheme (VES) is a small step in the right direction, but there can be many improvements, he said.

Introduced last Monday, the VES provides rebates or surcharges on vehicles based on the emission of carbon dioxide as well as carbon monoxide, hydrocarbons, nitrogen oxides and particulate matter. Electric cars are expected to qualify for a $20,000 rebate under the scheme.

One of the group’s members is Mr Joe Nguyen, 45, the senior vice-president of an Internet research firm. Two years ago, he made the headlines when his imported used Tesla Model S took more than six months to be approved and registered, and was slapped with a $15,000 carbon surcharge. Other electric cars had previously been granted rebates under the carbon emission-based vehicle scheme.

He is hopeful the association will help make it easier for those who want to buy electric cars.

“Consumers are beginning to want EVs, so this is something the Government will have to look at.”