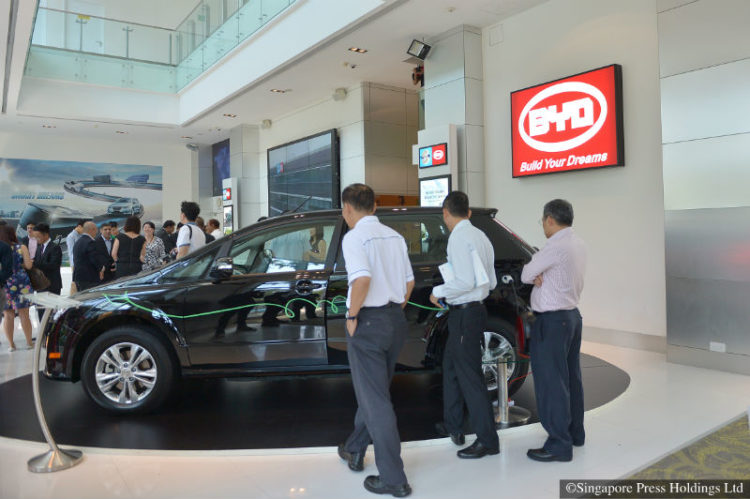 A potential buyer of the E6 would have to spend $12,000 or so to lay industrial cables to charge the vehicle.

Distributor S Dreams yesterday launched a fleet of seven battery-powered E6 five-door cars, which will be used in a limousine service with Uber.

The company is a subsidiary of Si2i, which was known as MediaRing before Indian billionaire B.K. Modi bought it for about $60 million in 2009 and renamed it.

Mr Spencer Tan, who is in charge of strategic partnerships at S Dreams, says the E6 has an open market value of about $48,000 – in the ballpark of a BMW 5 Series.

Hence, it is not going to be what most people expect Chinese cars to be – cheap.

Although Mr Tan declines to reveal retail prices, The Straits Times understands that the car would be close to $200,000 with COE.

Apart from price, the other hurdle BYD faces is its charging. Unlike most electric vehicles, which can be charged via normal household electrical outlets, the E6 requires a high-voltage fast charger.

A potential buyer would have to spend $12,000 or so to lay industrial cables required for such a charger.

The upside is that an E6 owner will incur far lower in running costs, never have to pull up at a petrol kiosk, and do his part to save the Earth.

Mr Tan says the car has a range of about 400km and recharging from empty would take less than two hours. And unlike most electric cars on the market, BYD uses iron-phosphate batteries.

“They are safer than lithium-ion batteries, which have been known to burst into flames,” he notes.

If the retail variant is anything like the seven limousines launched yesterday, it will appeal to young techies.

What is less appealing is its frumpy design. Looking like a dated station wagon, the E6 is popular among taxi operators in cities that are trying to flaunt their green credentials.

In another BYD venture here, new taxi operator HDT Singapore Taxi had announced that it would launch its fleet of BYD E6 cabs early this month.

As for environmentally conscious motorists who want to buy an E6, Mr Tan says: “If someone comes up today and says he has no problem with price and no problem with charging, we can deliver a car in two months.”

Meanwhile, BMW’s i3 is the most popular electric car here, with 60 hitting the road since its launch two years ago. It is priced at $215,800.