More vehicle owners are choosing to keep their wheels beyond 10 years, with the number hitting new highs this year.

According to figures released by the Land Transport Authority, 46,299 certificates of entitlement (COEs) were revalidated – or extended – in the period from January to October.

This is 20.4 percent more than the same period last year.

In fact, it is already 4.5 percent higher than last year’s full-year figure – which was an all-time high.

Vehicle owners can choose to extend the lifespan of their vehicles beyond 10 years by paying a prevailing quota premium, which is an average of COE prices in the preceding three months.

But this time, the growth came from commercial vehicle owners.

Those who revalidated COEs in the first 10 months of this year were mostly owners of smaller vehicles, continuing a previous trend. And most chose to extend by five years instead of the full 10 years.

“Also, there is no scrap rebate for commercial vehicles to speak of, so owners do not feel the pinch of forgoing that.” 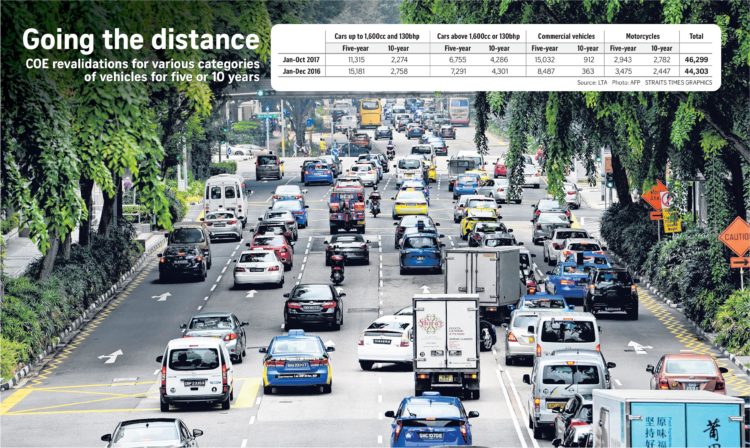 As for passenger cars, Mr Neo noted that the majority were “good trouble-free, economical cars”.

“The problematic ones are all scrapped,” he said.

As for why five-year revalidations make up the bulk of extensions, Singapore University of Social Sciences transport researcher Park Byung Joon said: “It makes sense that more people revalidate for five years than 10. It is easier for someone to pay $20,000 or so, instead of $45,000 if they want a 10-year extension.”

Professor Park noted that a 10-year extension may result in lower annual depreciation, but the difference is not significant for most bread-and-butter models.

Meanwhile, the revalidation trend has already led to fewer fresh COEs being released for bidding. Supply of certificates for the current November to January quota for instance, is 5.3 percent smaller than the previous August to October quota at 8635 pieces a month.

But this does not necessarily translate to higher COE premiums. Mr Neo of Prime said because of the upcoming Vehicular Emissions Scheme (VES), sellers will have less margin to bid for COEs.

The VES, which kicks in on Monday, metes out tax rebates or surcharges according to a car’s emission levels. The majority of cars are likely to face a tax hike because of this scheme, which replaces the less stringent Carbon Emissions-based Vehicle Scheme.

But because there are other cars which will still qualify for rebates, sellers cannot pass the cost increase completely to consumers. Therefore, they will have thinner profit margins to secure COEs with.

Motor traders also expect the revalidation trend to smoothen out the supply of COEs. This will happen when cars revalidated for five years (the majority of revalidations) are scrapped between 2020 and 2022, which otherwise would see the next cyclical plunge in COE supply.