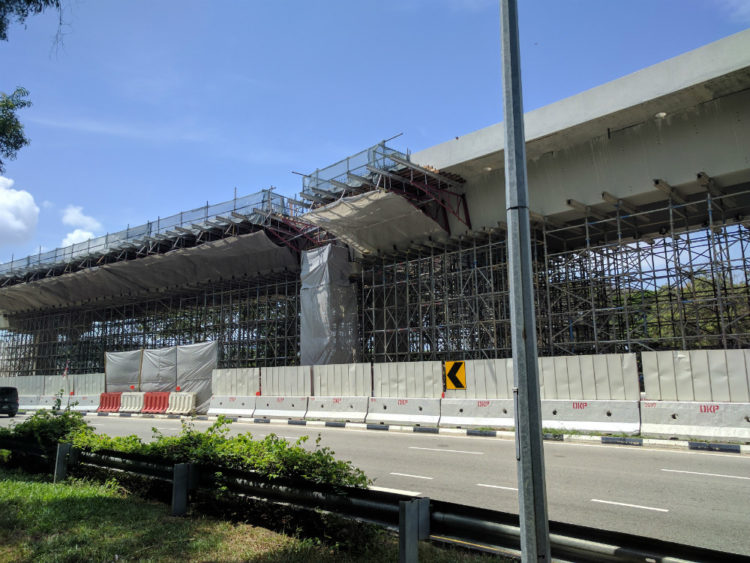 Scaffolding put up as additional support could be seen yesterday afternoon. According to the LTA, it helps prop up beams at the remaining spans of the viaduct, where cracks have been found at 11 locations on load-bearing corbels.

Rows of metal supports have been erected to support parts of an incomplete Upper Changi Road East viaduct after cracks were found during an investigation into the deadly collapse of a section last week.

On July 14, two corbels – which are meant to bear the load of horizontal beams during construction – gave way, causing a segment of the uncompleted viaduct to collapse while 11 workers were on it.

One died, and 10 were injured. As of yesterday, six were still warded, the LTA said. Work on the site has since been ordered to stop.

Right after the accident, a qualified person (QP) for design from the project company inspected the structural integrity of the remaining six spans of the viaduct at the site.

The QP assessed that there would be no danger after the installation of extra propping to the beams adjacent to the collapsed span, according to the LTA.

Installation of the rows of metal supports started on the same day of the accident.

The project to design and build the viaduct from the Tampines Expressway to the westbound Pan-Island Expressway was awarded to Or Kim Peow Contractors and its consultant, CPG Consultants, in 2015. It was slated for completion in 2020.

Since the accident, a multi-agency team comprising the LTA, Building and Construction Authority and the Ministry of Manpower have been trying to determine what led to the collapse.

The work site has been hoarded up to facilitate recovery work and investigation.

The cause and nature of these newly discovered cracks – whether they are minor or point to more serious problems – are still being studied.

Building experts told The Straits Times that cracks are common in load-bearing concrete structures, so long as they are not beyond a certain width.

Said former president of the Institution of Engineers Singapore Chong Kee Sen: “The presence of a crack should not be an automatic cause for alarm, though it is an area of concern if the structure is new.”

Engineering firm Vertes Technologies’ director Chiam Soon Kiam said cracks above 5mm, for example, could hint at a structural issue. However, pictures released by LTA yesterday do not show any serious cracks.

Ms Chiam said: “In any case, the additional supports are more than enough to reduce the chance of another collapse. No one wants another incident on the same site.”

Corbels are designed to hold only a temporary load at the early construction stage.

When the concrete in the rest of the structure has set, it becomes self-supporting and most of the load is lifted from the corbels.

Cracks, if any, are typically detected during inspections by the main contractor or the project consultants before the next stage of work. These cracks would be patched up using cement or epoxy, said Mr Chong.

Associate Professor Goh Yang Miang of the National University of Singapore’s Department of Building, said: “In corbels made using reinforced concrete, cracks occur as concrete is not that great in dealing with tensional forces. But the metal reinforcement bars within the corbels should be able to withstand the stress.”

While cracks in multiple corbels may hint at a possible design issue, he stressed that one should not jump to conclusions without more information.