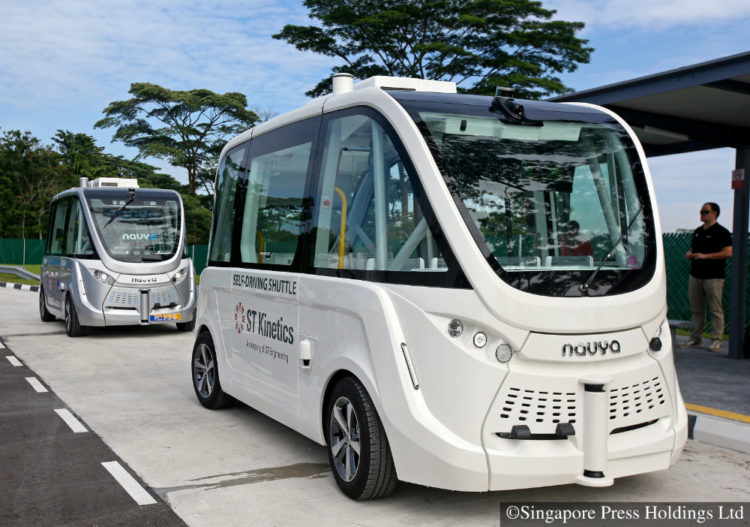 The new 2ha AV test centre will put self-driving vehicles through their paces, with a test circuit replicating Singapore’s road and traffic conditions.

The Government has identified Punggol, Tengah and the Jurong Innovation District (JID) as areas where residents and workers can turn to pilot self-driving buses and shuttles for their first- and last-mile commutes.

At these three new towns, it is envisioned that robot buses will run scheduled services during off-peak periods to complement human-driven ones, while driverless shuttles can be summoned on demand by commuters.

“We expect that the autonomous vehicles will greatly enhance the accessibility and connectivity of our public transport system, particularly for the elderly, families with young children, and the less mobile,” Mr Khaw said on Wednesday.

He was speaking at the opening of the first test centre for driverless vehicles, located outside Nanyang Technological University (NTU) and a part of the future JID.

Punggol, specifically the Punggol Northshore, Punggol Point and the Punggol Digital Districts, Tengah and JID were chosen as they are upcoming areas whose development timelines coincide with when the Government expects AV technology to be ready for limited deployment.

“ Furthermore, it is expected that the relatively younger demographics in these areas would be more receptive to newer technologies and modes of travel,” said the Ministry of Transport (MOT) and the Land Transport Authority (LTA) in a statement.

Mr Khaw said the piloting of AVs in these towns will give the Government further insights into how new towns can be planned or existing ones refurbished for the safe mass deployment of driverless vehicles.

To gather insights from industry players and research institutions, the MOT and LTA launched a Request for Information (RFI) on Wednesday. The RFI will be open until May 31 next year. 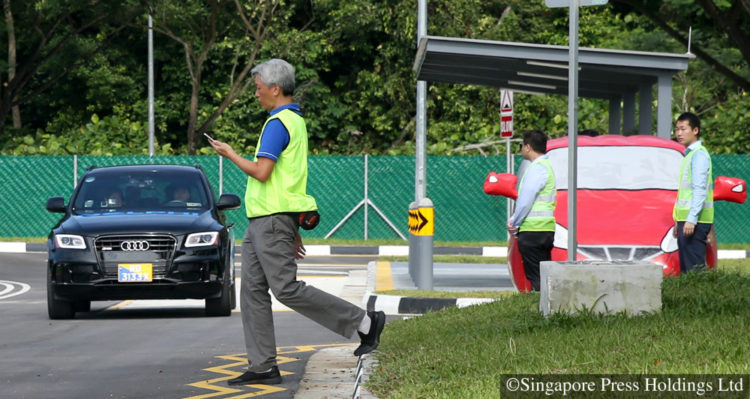 A self-driving car being tested at a autonomous vehicle test circuit, simulating a pedestrian walking in front of it.

This will inform the Government on various aspects, such as how the driverless vehicles can be deployed, the physical space required for depots and other facilities, and other technologies needed, such as a fleet management system.

Mr Khaw said: “The biggest challenge for autonomous vehicles is not the development of the technology, but how we can safely incorporate it into our living environment, through appropriate regulations and town planning.”

In October last year, a driverless car being tested by start-up nuTonomy collided with a lorry in the one-north test-bed area. The accidentwas due to an “extremely rare combination of software anomalies”, the company had said.

Professor Subodh Mhaisalkar, executive director of NTU’s Energy Research Institute, said the AV test centre, which has a 3.2km track, offers companies a “simulated environment” to test their driverless vehicles against dummy vehicles and pedestrians, before they are deployed in one-north, and other areas in the future.

There are at least 10 companies and research institutes involved in AV testing in Singapore.

LTA had earlier inked deals with the UK-based Delphi Automotive Systems and nuTonomy to launch driverless taxis as early as next year, and another agreement with ST Kinetics to trial autonomous buses from 2020.

Mr Khaw said on Wednesday that AV technology will transform urban mobility and how people move about in the city.

“It is especially promising for Singapore because it can help alleviate the tight land and manpower limits that currently constrain our land transport system,” he added.

Prof Mhaisalkar said the test centre will push forward the development of AVs, by allowing companies to test out experimental technologies – such as sensors and software – which are not fully road-worthy, but have the potential for breakthroughs.

Prof Mhaisalkar added: “The development (of AVs) will be accelerated because you are not worried, (that) if your experiment fails, you will be in the newspapers tomorrow.”