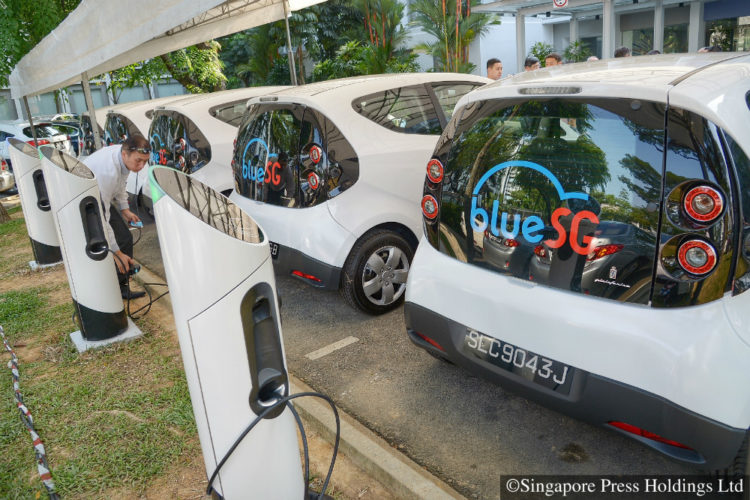 The hiring fees for Singapore’s first large-scale electric car-sharing scheme, which starts next Tuesday, will be comparable with taxi fares.

BlueSG, part of a group that operates a similar scheme in Paris, announced yesterday that there will be two plans.

One charges a monthly subscription of $15, and 33 cents for each minute of use. The other has no monthly fee, but will charge 50 cents a minute.

Depending on the time of day, the rates are comparable with taxi fares. For instance, for a cab hailed on the streets, the off-peak fare is around $12 for a 20-minute ride.

The scheme will start with 80 cars that will be rolled out islandwide for users to rent via a BlueSG mobile application, which can be downloaded today from the App Store and Google Play.

Users will be charged according to the duration of use instead of the distance travelled.

In all, there will be 30 BlueSG stations with 120 charging points across the island by the year end.

Of the 30 stations, 18 are in public housing estates such as Tampines, Bishan and Punggol, while 10 will be in the city centre. The remaining two are in the one-north business park and the Singapore Science Park.

The launch by BlueSG, a subsidiary of French conglomerate Bollore Group, comes after years of planning and a number of delays.

BlueSGaims to expand its fleet to 1000 electric vehicles and install 2000 charging points by 2020.

The move will put this on course to become the world’s second-biggest electric car-sharing scheme after the one in Paris, which has more than 4000 cars.

Socar, the top car-sharing operator in South Korea, charges around $20 an hour, he added.

He noted that unlike other transport options such as Uber and Grab “in which the car comes to you, you have to go to the car” in the new scheme.

Mr Lai Meng, president of the Car-Sharing Association of Singapore, said the rates were “slightly higher” than expected, but noted the higher cost of electric cars.

Unlike some tax-exempt electric taxis with research plates plying Singapore roads, the BlueSG cars will have normal car plates and attract full taxes. They are estimated to cost around $100,000 each.

Mr Lai said surveys indicate that users, who prefer driving a car instead of being driven to their destinations, are prepared to pay a premium of up to 20 percent above taxi and private-hire car rates.

The business owner, who drives and takes public transport as well, added: “It will be better if they can increase the number of spots to pick up and drop off the car.”

BlueSG’s two-door, four-seater hatchbacks can travel up to 250km on one full charge of their lithium-metal-polymer batteries.

Motorists who are interested in the scheme can register at www.bluesg.com.sg.