Electric shuttle between NTU and CleanTech One building to be tested in second half of 2018 | Torque
Loading posts...
0 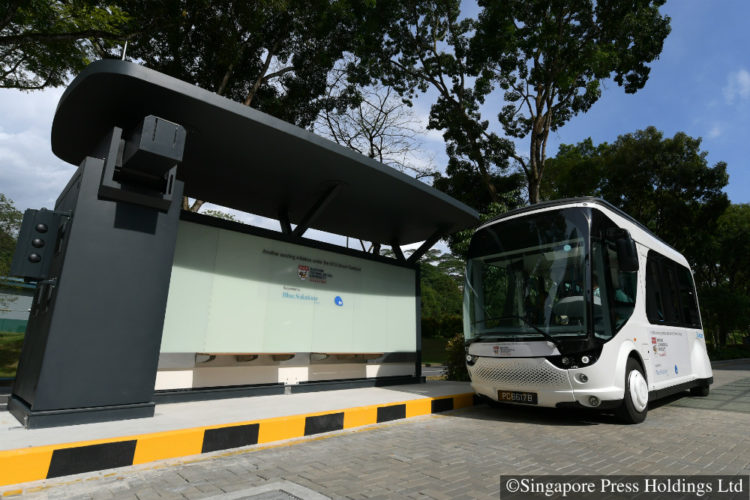 The NTU-Blue Solutions Flash Shuttle, was launched by the university and electric vehicle-sharing firm BlueSG, a subsidiary of Blue Solutions under the Bollore Group.

A fully electric 22-seat shuttle that takes only 20 seconds to recharge will ply between Nanyang Technological University (NTU) and neighbouring CleanTech Park in a test run from the second half of this year.

The vehicle, dubbed the NTU-Blue Solutions Flash Shuttle, was launched on Monday (Jan 22) by the university and electric vehicle-sharing firm BlueSG, a subsidiary of Blue Solutions under the Bollore Group.

It will run a 1km test route with two stops – one at NTU’s Halls of Residence at North Hill in Jalan Bahar, and the other at JTC’s CleanTech One building, part of the Jurong Innovation District.

There will be a charging station at each stop, and the vehicle will recharge while passengers board and alight.

Its fast charging is achieved through the use of supercapacitors, which have longer lifespan than lithium-ion batteries and 10 times the energy density.

While the use of a supercapactitor limits the shuttle to travelling only 2km on a single charge, it also has a backup battery that will allow it to travel for an additional 30km.

Professor Subodh Mhaisalkar, executive director of the Energy Research Institute at NTU (Erian), said the distance limitation makes the vehicle suitable for first-and-last mile trips, and such shuttles might be used as feeder buses in the future.

The shuttle is the Bollore Group’s BlueTram vehicle, which operated along the Champs Elysee in Paris during the United Nations Climate Change Conference in 2015.

The project is part of a two-year research partnership between NTU and BlueSG, supported by the Economic Development Board. It is also one of the initiatives under the France-Singapore Year of Innovation, which aims to intensify cooperation in innovation this year.

“We expect that the insights and innovations developed from this research programme will benefit Singapore eventually by enhancing the first mile-last mile transportation options for everyone,” said NTU president Subra Suresh, noting the shuttle is in line with the university’s smart campus vision.

NTU is also in talks with BlueSG to install the firm’s electric vehicle car-sharing stations on campus, as part of the company’s expansion of its charging stations islandwide.

Earlier this month, NTU and Volvo Buses signed an agreement to develop driverless electric buses, which will begin testing here early next year.

For the project with BlueSG, a joint research team will study factors such as the impact of fast-charging and air-conditioning on the vehicle’s performance.

BlueSG managing director Franck Vitte said: “We will see how the BlueTram operates in tropical climates, as well as its effect on the grid.”

While Singapore’s electrical grid is well-developed, said Prof Subodh, a “much deeper look” at the possible impact of electric vehicles on the grid is needed.

“If there are hundreds of buses and taxis charging in a small area, we need to understand what impact this will have on the grid. The grid’s stability and reliability are things we cannot compromise.”