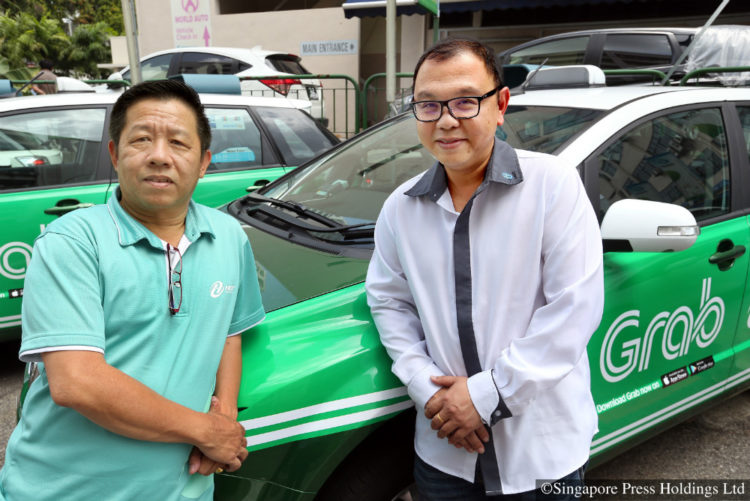 HDT cabbies Michael Ng (left) and Danny Chia get a basic gross income of $1900 a month, including CPF contributions.

Many cabbies are throwing in the towel but new taxi company HDT Singapore Taxi is hoping to lure them back by offering fixed salaries and employment benefits such as annual leave and Central Provident Fund (CPF) contributions.

The scheme to treat drivers as full-time employees instead of renters appears to be taking off. Since the all-electric taxi operator hit the road last October, it has recruited drivers for all its current 50 cabs.

HDT managing director James Ng told The Straits Times last week: “Although people say that taxis are a dead business, we look at it in a different way. Our employment scheme provides a realistic alternative to taxi drivers.”

Of the company’s approach, he said: “For us, it’s about managing the revenue line. Our assets are not the cars but the drivers.”

The other five taxi operators, which run a total of 27,500 cabs, rent out their taxis at a daily rate that can be as high as $130 a day for a saloon model. Cabbies keep whatever fares they earn.

HDT’s cabbies get a basic gross income of $1900 a month, including CPF contributions, which can go up to $2800 with overtime. Their pay can go progressively higher with higher revenue targets. If $8500 is achieved, for example, the gross salary rises to $4300.

Besides street hails, HDT cabbies also get customers from bookings via ride-hailing app Grab, with which HDT has partnered.

The fare takings from all revenue streams are retained by HDT but its drivers do not pay a rental fee and get to keep any Grab incentives.

HDT cabby Michael Ng, 52, said he takes about three weeks, driving about 12 hours a day and six days a week, to hit the $7500 target. With that, he gets $3200 in gross salary. “I’ll usually take Sunday off. And I don’t have to worry about paying rental,” said Mr Ng, who has been a cabby for 10 years.

HDT also provides annual and medical leave, and free charging of the China-made electric cabs at 40 charging points it has built, which will grow to 57 by early next month.

With fixed salaries and benefits, HDT’s Mr Ng is “confident” it can recruit more drivers to fill the 100 cabs it intends to have by June, even as other operators are struggling to rent out their vehicles.

National University of Singapore transport researcher Lee Der Horng said it remains to be seen if HDT’s business model is sustainable. “The fleet is still small, and they are able to attract sufficient drivers for now,” he added.

Many taxi drivers said they still prefer renting their cabs. A cabby who wanted to be known only as John, 56, said: “It’s not that easy to hit $7500… It’s still better to rent a taxi, and I have the flexibility of how much I want to work daily.”