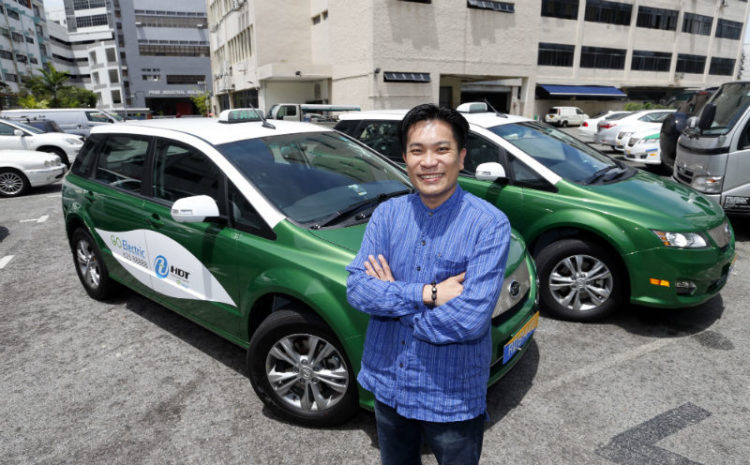 An industry-bucking employment scheme for taxi drivers which started in October has hit a few bumps in the road, with cabbies misappropriating fare revenues and underperforming, The Sunday Times has learnt.

But HDT Singapore Taxi, the sole cab operator here offering drivers fixed salaries, said it is sticking to its guns on its business model.

The bulk of the more than 26,000 taxis in Singapore are owned and rented out by five cab companies to drivers, who pay a daily rental fee of up to $130 for a saloon model.

HDT (Hold Dreams Together), which runs a fleet of 80 electric-powered taxis, instead pays its drivers a starting monthly wage of $1900, inclusive of Central Provident Fund (CPF) contributions,which can grow to a gross pay of $3200 if a revenue target of $7250 is reached.

But the system has been abused.

HDT Singapore Taxi’s managing director James Ng told The Sunday Times last week that there were five drivers who absconded with fare takings. Each owes the company an average of around $2000.

Unlike the rental-hirer model, in which drivers keep all the fares they make, HDT’s cabbies have to submit their revenue back to the company. It has engaged lawyers to help recover the money.

Mr Ng said he also sacked another cabby who collected a few hundred dollars in fares but overrode the taxi meter by entering a one-cent amount for those trips. This prevented the company’s systems from capturing the fare revenue.

There were three more drivers who were asked to leave due to their low productivity.

“They collected less than $100 in fares every day. I had a case, where after paying him a salary, I was left with almost nothing,” Mr Ng added.

Despite the hiccups, he said HDT is sticking to its employment model.

Mr Ng said: “We believe we are a preferred company. (Cabbies) outside are complaining that revenue-taking is uncertain. As long as you are working with us, your basic salary is always there.”

Under fierce competition from private-hire car services Grab and Uber in recent years, cabbies have said that incomes have been hit by at least 20 percent to 30 percent.

“Under an employment scheme, there are certain risks I have to bear… Even in the F&B and retail business, for example, you are still faced with cash-handling problems,” he said.

Mr Ng said that a few months ago, the firm hired dedicated staff to track the drivers’ performance and revenues more closely. Candidates will be interviewed more thoroughly, and drivers who do not perform will also be counselled, he said.

About six out of 10 drivers meet at least the $7250 target, said Mr Ng. Beyond a target of $7500, the driver and company enter into a progressive profit-sharing system, starting at a 45:55 ratio, in which the company bears the CPF contributions.

“The market is tough (now), but it is achievable. I bring back about the same (pay) when I was a hirer, but I’m more relaxed and I have medical coverage and annual leave,”he said.

Another HDT driver, Mr Henry Tay, 47, said: “The company provides the electricity for free. I have less stress, as I don’t worry about petrol or diesel costs.”

The only downside, he said, is the time used to charge the car. The battery of the Chinese-made taxi, a BYD (Build Your Dreams) e6, takes about two hours to charge up fully, to travel a distance of 400km.

“There are some kinks here and there but an appropriately calibrated basic wage plus commission will help meet the business’ as well as most drivers’ needs.”

Mr Ang said the authorities could offer operators incentives to replace the more than 1800 cabs to be used for an employment-type scheme for drivers.

HDT, meanwhile, is looking to recruit more cabbies as it will add another 20 cabs to its fleet by the end of this month.