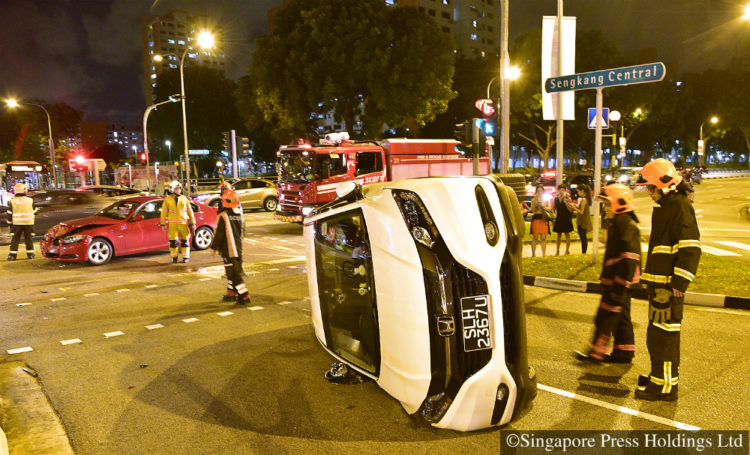 A collision at the junction of Buangkok Drive and Sengkang Central left a white Honda Vezel on its side on Tuesday (Aug 29) night. No one was injured.

Its driver, a 50-year-old man who declined to speak to the media, appeared unscathed after he alighted from an ambulance on the scene.

His car, travelling towards Sengkang Central, was hit after it suddenly cut in front of another car, a GrabHitch, carrying two passengers.

“I remember the other car coming in front of us and our driver stepping on the brakes,” said one of the passenger of the GrabHitch, who wanted to be known only as Ms Emiko.

The 30-year-old, who works in a bank, added that she saw the other car flip on its side.

Many passersby rushed forward to help its driver.

When The Straits Times arrived at the scene around 9.25pm, an ambulance and red rhino were present.

“We’re really shocked. I’m still shaking,” Ms Emiko said, adding that she was in the front seat, but uninjured.

Mr Alfred Ng, 63, an Uber driver who was travelling behind the GrabHitch, said: “We were slowing down when I saw a car zoom past from the right suddenly.”

“I thought it would already have been a red light on the other road,” he added.