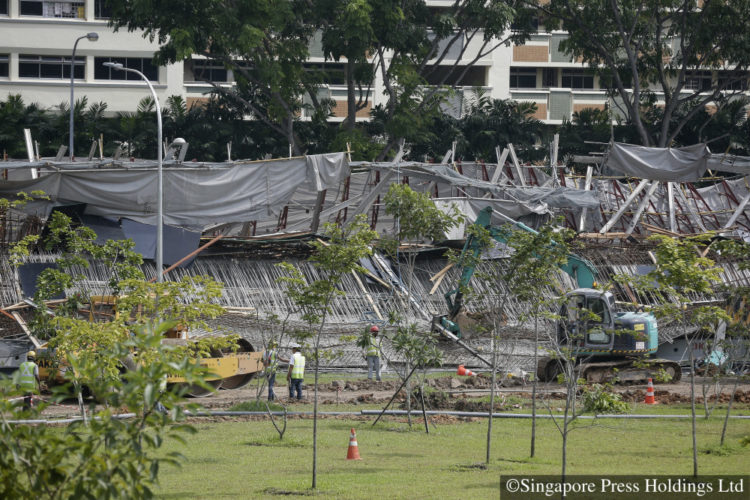 Ongoing excavation work for a temporary bypass road for traffic heading towards PIE (Changi Airport) from Upper Changi Road East next to the section of viaduct undergoing construction which collapsed the day before, on July 15, 2017.

Investigations into the fatal Pan-Island Expressway viaduct collapse will be completed in October, said Senior Minister of State for Transport Lam Pin Min during a debate that revealed contractor Or Kim Peow (OKP) had the lowest quality score among qualified bidders.

Dr Lam told Parliament yesterday that although preliminary investigations pointed to the design of supporting structures called corbels as the cause of the July 14 collapse that killed one worker and injured 10 others, MPs should let the investigation “take its due course”.

He said the uncompleted viaduct project will be on hold until investigations are over.

Minister of State for Manpower Sam Tan later told the House that his ministry has started a review of laws on workplace safety, and aims to complete it by this year.

Asked why main contractor OKP was awarded the project despite having a fatal incident in 2015, Dr Lam said investigations into that incident – where a worker died after falling from a 6m-high platform – had not concluded when the tender was awarded.

He added that OKP had a good 10-year safety record before the 2015 incident, and had also submitted the lowest bid.

To this, Mr Seah Kian Peng (Marine Parade GRC) said that notwithstanding a bidder’s track record, weight should be given to recent safety incidents even if findings have not been concluded. Furthermore, Mr Seah pointed out, OKP’s winning bid was substantially lower than the next lowest bid.

Dr Lam revealed that a price-quality ratio of 70:30 was used to assess bids for the ill-fated viaduct project. Of the quality component, the Land Transport Authority (LTA) assigned 25 per cent to safety.

He noted OKP “actually scored the lowest for quality in the project submission”, although it had the highest price-quality score overall.

Responding to Mr Seah, he said LTA does review the guidelines to make necessary changes, and it will have to seek approval from the Building and Construction Authority to make significant changes.

Post-incident checks revealed cracks at 11 other locations along the failed viaduct. It has also emerged that a consultant from CPG – OKP’s sub-contractor – who designed the viaduct was also the supervisor who checked the construction works.

While the practice is not illegal, industry players said it is not ideal.