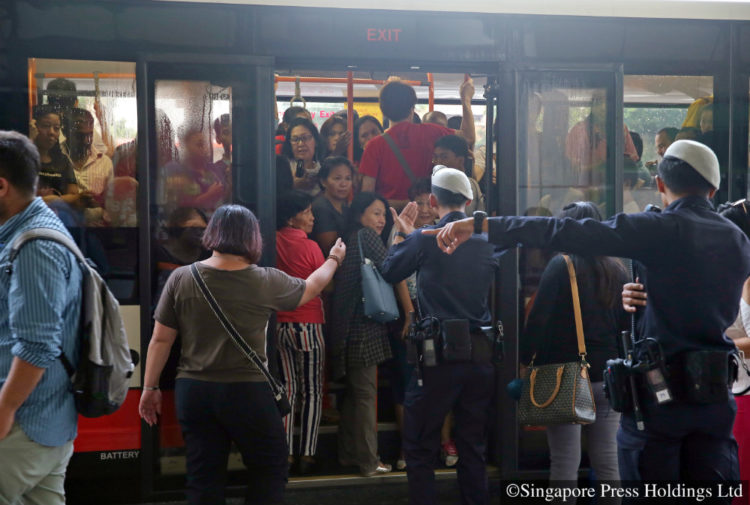 Commuters using a bridging bus service at Bishan station after MRT service was disrupted by a flooded tunnel on the morning of Oct 8.

Until all its key ageing systems are replaced or renewed, the North-South and East-West lines (NSEWL) remain at risk of major disruptions, even with diligent maintenance, Transport Minister Khaw Boon Wan said yesterday.

He told Parliament that projects to replace the ageing components on the 30-year-old NSEWL have reached about their halfway mark, and are targeted to be finished in 2024.

But he has asked the Land Transport Authority (LTA) to work with SMRT to see how to “squeeze out more engineering hours” and “speed up” renewal of the assets.

He drew an analogy between his heart operation seven years ago and the upgrading of the rail assets, saying his cardiologist had advised him to bite the bullet and fix his heart problem with a bypass, or risk falling dead.

To date, components such as track sleepers and the power-supplying third rail have been upgraded, while the ongoing overhaul and testing of the signalling system is targeted to be finished by the end of next year.

There are also plans to renew the power supply system and track circuits, and to replace old first-generation trains.

“When these asset renewal works are progressively completed, and as new rail lines open, they will translate into significant improvements in the resilience of our rail network and commuter experience,” Mr Khaw said.

He said a target set for 2020 to have MRT trains travel an average of one million kilometres before encountering a delay of longer than five minutes is achievable.

Mr Khaw acknowledged that commuters may not be able to relate to this as the MKBF improvements did not always bear out in their actual real-life experiences.

This is because of teething issues with signalling system testing on the North-South Line, which have caused several disruptions, he said.

But he added that a corner has been turned, and the system is stabilising.

He urged MPs to help explain the difficulty of the re-signalling tests to residents and to influence their feedback.

He added that he would similarly need the support of MPs whose residents live near the East-West Line when testing for its signalling system starts.

To give rail engineers more time to do the upgrades, said Mr Khaw, train operating hours on the NSEWL will likely be shortened, including on weekdays.

SMRT had previously ended train services earlier at selected stations on the NSEWL, over stretches in 2014 and 2015, to facilitate the replacement of sleepers.

“Line closures will, of course, inconvenience commuters. I seek commuters’ understanding and patience should we decide to do so. We are likely to do so,” he said.