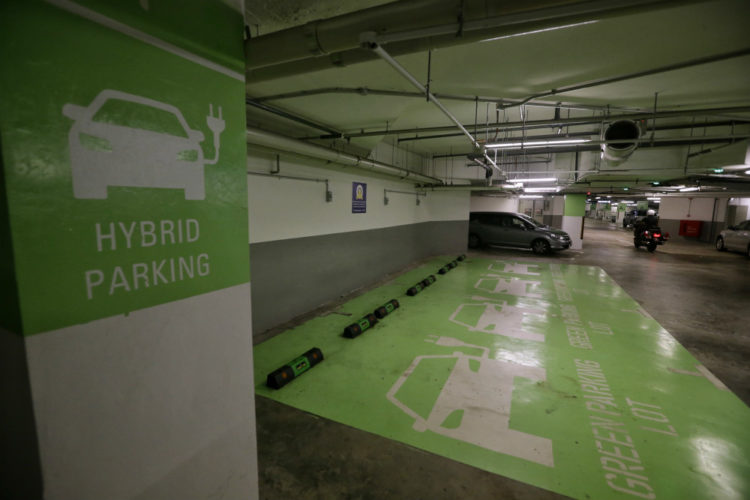 Green parking spaces for hybrid cars at Punggol Waterway Point. Such cars run on a normal petrol or diesel engine combined with an electric motor.

To reward drivers who choose eco-friendly cars such as hybrid or electric vehicles, property developers are setting aside for them more parking spots that are near the entrances and lift lobbies at shopping malls, for greater convenience.

Hybrid cars run on a normal petrol or diesel engine combined with an electric motor, while electric cars run on rechargeable batteries.

Such cars are growing in popularity, with 14,139 petrol-electric hybrid cars registered as of last month, according to the Land Transport Authority’s website. This is more than twice the 6371 registered in 2015.

A CapitaLand spokesman said the green parking spaces were set aside “in support of Singapore’s move towards sustainable mobility”. It has 16 such parking spaces in seven malls, including IMM Building and Westgate in Jurong.

Having 10 spaces for hybrid and four for electric cars was a natural decision for City Square Mall, which prides itself on being “Singapore’s first eco-mall”.

It has other green practices to ensure minimal wastage of energy and to reduce its carbon footprint, said a spokesman for City Developments, the mall’s manager.

The electric car parking spaces at City Square Mall are also equipped with charging outlets, which are currently being upgraded.

Mr Alvin Hum, 41, who works in the online industry, is a regular visitor to City Square Mall and Punggol Waterway Point.

The driver of a hybrid vehicle said, as he was pulling out: “I use the green lots often and they really bring me a lot of convenience.”

Ms Jenny Khoo, head of asset operations at property group Lendlease, which manages malls like 313@Somerset and Parkway Parade, said the spaces are well used by drivers of green vehicles.

To ensure they are not being used by drivers of regular petrol-driven cars, the managements at some malls have their security officers carry out regular patrols and checks.

“Unauthorised users will be warned, and repeat offenders wheel-clamped,” said Ms Khoo. There are also signs warning drivers about this.

Drivers of eco-friendly cars are not the only ones to benefit, as projects assessed under the Building and Construction Authority’s (BCA) Green Mark scheme – Singapore’s green building certification – may earn points from providing green spaces.

Gaining Green Mark accreditation could enable developers to be eligible for incentive and financing schemes such as the BCA Green Mark Bonus Gross Floor Area (GFA) scheme, in which developments could increase their GFA by up to 2 percent for meeting higher-tier BCA Green Mark standards.