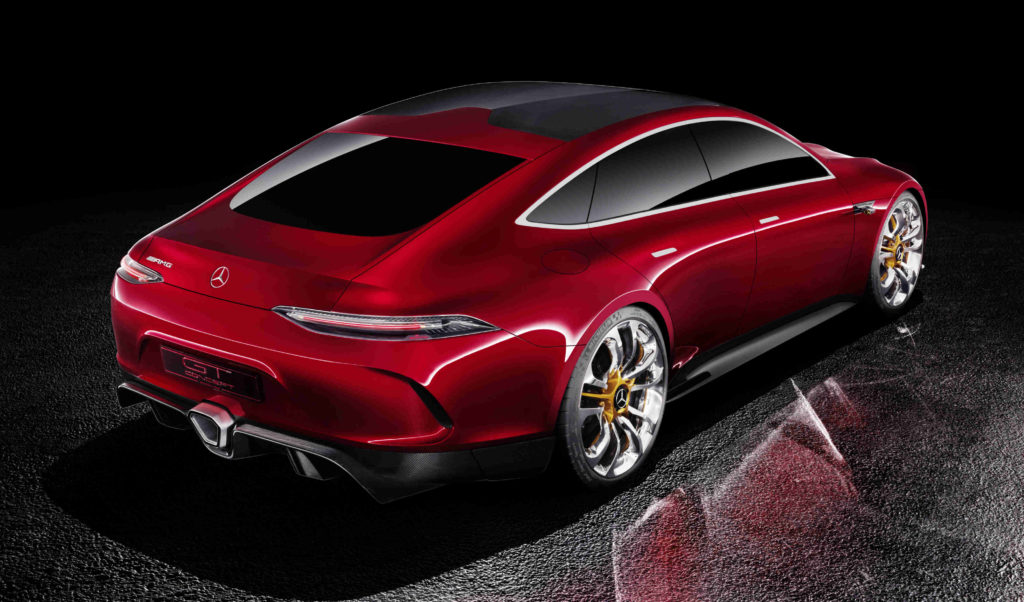 With the Mercedes-AMG GT Concept, Daimler’s performance brand is giving an indication of the alternative drive configurations AMG is designing. Over and above this, the four-door coupe heralds the further extension of the AMG GT family.

The designation and fundamental design elements on the front and tail end denote the family affiliation to the AMG GT. The “EQ Power+” identifier on the mirror cam indicates the increased performance that can be expected from hybridisation at AMG.

The four-door sports car from Affalterbach will seamlessly continue the success story of the AMG GT. The dynamic fastback will also be highly suitable for everyday use, thanks to its large tailgate and variable interior and luggage compartment. The new coupe thus blends the high functionality of the performance cars with the sportiness of the AMG GT sports cars. The show car gives a sneak preview of the exterior design of the coming series production model.

With the aid of the unmistakeable design idiom with a deeply drawn bonnet and powerfully raked windscreen, the AMG GT Concept is recognisable at first glance as a genuine AMG GT. The exterior design stands out with extremely muscular proportions, a large volume, plus sensuous and simultaneously reduced surface styling.

With “nano active fibre technology”, Mercedes-AMG is presenting future-oriented daytime running lamps for the first time. This is produced by a special bright light system in a freely styled light cord. The three-dimensional illumination effect lends the AMG GT Concept an autonomous light signature, which is flanked by numerous further measures in the high-tech headlamps.

The drive system of the AMG GT Concept represents a completely new development. After the Formula 1 racing machine, the show car is the second AMG model to bear the new designation “EQ Power+”, which all performance hybrids from Mercedes-AMG will be given henceforth.

The performance hybrid system combines the powerful 4-litre V8 biturbo engine with an additional powerful electric motor and thus ensures extremely immediate response and extraordinarily high system performance. The sprint from zero to 100km/h can be mastered at a super sports car level by the AMG GT Concept in less than three seconds.

Check out the Mercedes-AMG GT R.

Read our comparison of SLS AMG and A45 AMG.