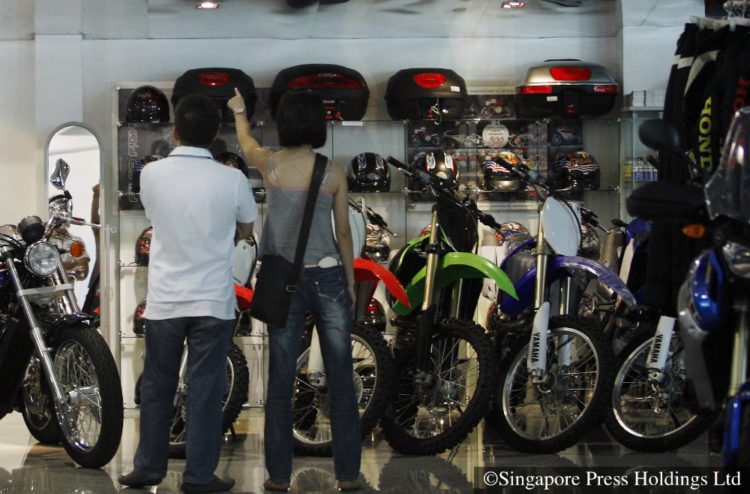 Mr Norman Lee, honorary general secretary of the Singapore Motorcycle Trade Association, said the increase was due to both personal demand and demand from businesses like delivery services.

Despite the recent introduction of the tiered Additional Registration Fee (ARF) for motorcycles, demand for higher-capacity motorcycles was not dampened, he added.

Previously, all motorcycles had a flat ARF of 15 percent.

Mr Lee said that while quantums are likely to stay high for the next few months, they should dip after May.

Kah Motor general manager Nicholas Wong said: “Prices should stabilise or even come down.” He added, however, that this is still dependent on demand at the time.

Experts noted that premiums could go up even more, as the additional cost of the ARF could result in owners of 10-year-old motorbikes choosing to renew their current rides rather than buy new motorbikes, reducing the COE supply further.

Besides the motorcycle category, all other COE categories ended higher except for commercial vehicles.

For the Open category, available for any vehicle type but used mostly for bigger cars, COE prices also rose from $51,000 to $53,001.

Chairman of diversified motor group Prime, Mr Neo Nam Heng, said that “consumers are rational and are not rushing to showrooms” ahead of the new Vehicular Emissions Scheme (VES).

The scheme will impose higher surcharges on carbon dioxide as well as four other pollutants emitted by motor vehicles.

Cars that currently qualify for rebates under the Carbon Emissions-based Vehicle Scheme may incur surcharges under the new scheme.

These include popular models such as the Nissan Qashqai, which has a $5000 rebate currently but will have a $20,000 surcharge under the VES.

Mr Neo, however, expects COE prices to drop following next January’s implementation of the VES. This is because car prices are likely to go up as fewer models will qualify for rebates under the stricter regulations.