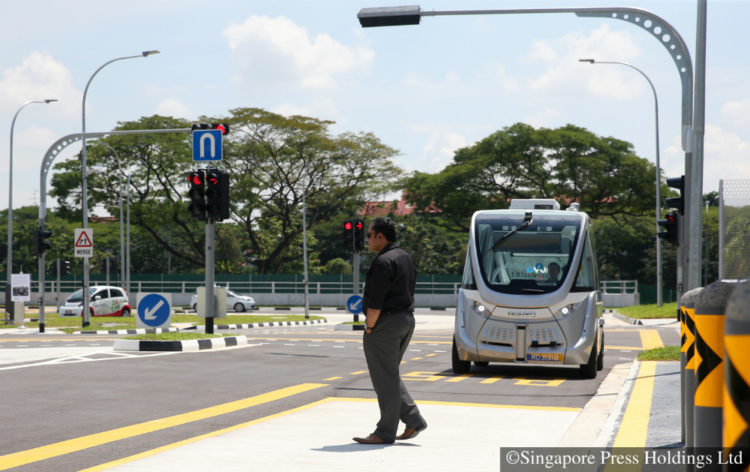 A “jay-walker” passing in front of a Navya self-driving shuttle bus at the new autonomous vehicle test centre. It will provide a “safe, controlled and configurable” testing environment for AV developers to test their technologies using a range of simulated on-road scenarios, said Transport Minister Khaw Boon Wan, who opened the 2ha centre.

An autonomous vehicle (AV) test centre which officially opened on November 22, 2017 will put self-driving vehicles through their paces, with a test circuit replicating Singapore’s road and traffic conditions.

The 2ha test centre also has a rain simulator and flood zone to test the navigation abilities of autonomous vehicles under different weather conditions.

The $3.6 million facility was jointly developed by the Nanyang Technological University (NTU), the Land Transport Authority and JTC, as part of the Centre of Excellence for Testing and Research of AVs – NTU, which was launched in August last year.

Transport Minister Khaw Boon Wan, who opened the AV test centre, said it will provide a “safe, controlled and configurable” testing environment for AV developers to test their technologies using a range of simulated on-road scenarios.

“These scenarios could include aggressive driving and interactions with other road users, including cyclists and users of personal mobility devices,” Mr Khaw said.

Mr Niels de Boer, the programme director of Future Mobility Solutions (Autonomous Vehicles) at NTU, said the test centre will allow new AVs to be trialled before they are put on the roads at the designated AV trial routes, which include one-north and Buona Vista. 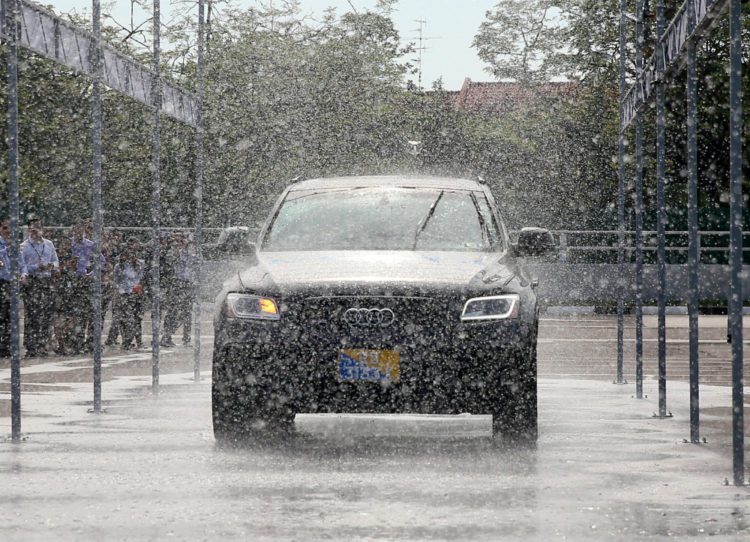 A Delphi self-driving car going through a rain simulator. The centre also has a flood zone to test the navigation abilities of autonomous vehicles in adverse weather.

In the future, the test centre will also test the safety of AVs without a safety driver behind the wheel, said Mr de Boer.

The test track has a network of seven 360-degree closed-circuit television cameras at strategic locations which will stream real-time footage to a monitoring and evaluation system.

NTU, which manages the AV test centre, said up to six AV developers will be using the facilities over the next six months.

One of them is US and Singapore-based start-up nuTonomy, which plans to launch driverless taxis here by the middle of next year.

Mr Doug Parker, the company’s chief operating officer, said: “We can script scenarios using robotic bikes and mannequins to make very challenging situations that we might not see at one-north.”