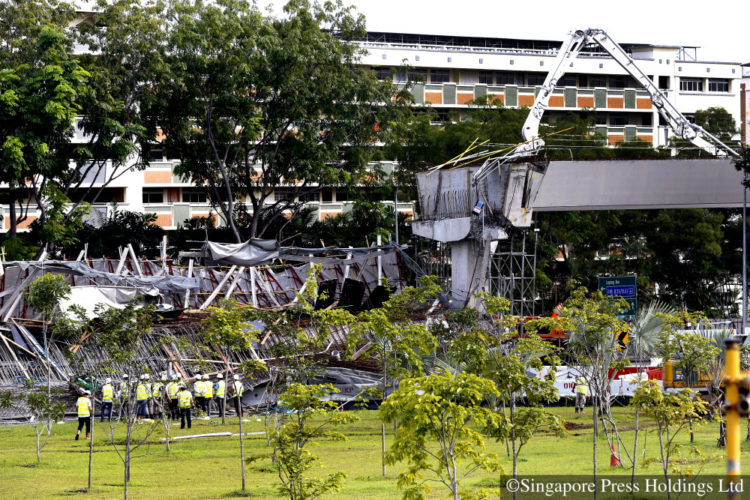 Construction firm Or Kim Peow (OKP) was casting a section of the viaduct adjacent to a slip road from Upper Changi Road East to the Pan-Island Expressway when it gave way, killing one worker and injuring 10 others, on July 14, 2017.

Senior Minister of State for Transport Lam Pin Min revealed in Parliament yesterday that the price-quality ratio for such projects ranged from 80:20 to 60:40, depending on the complexity of the project.

In the case of the Pan-Island Expressway viaduct project in Changi, the ratio was 70 for price and 30 for quality. Dr Lam said other projects of similar complexity and nature also had this ratio.

He revealed that the Building and Construction Authority assigned 15 percent of the quality component to safety performance, but the LTA in its deliberations raised this to 25 percent.

Part of the uncompleted viaduct collapsed last month, killing one worker and injuring 10 others.

The incident was scrutinised in Parliament yesterday, and Dr Lam told the House that main contractor Or Kim Peow (OKP) Contractors had actually scored the lowest for quality among the four qualified bidders. However, it had the lowest bid, which resulted in it having the highest price-quality score overall.

And while OKP had a fatal incident in 2015, he noted that investigations were still ongoing when it was awarded the PIE contract.

He also pointed to OKP’s good track record over the past 10 years and how it improved its safety standards since the 2015 accident.

According to tender documents, OKP – which partnered engineering consultancy CPG to land the PIE viaduct project – had put in a bid of $94.6 million.

This was 27 percent lower than the next lowest bid of $129.7 million by Yongnam Engineering. Two other bidders – Singapore Piling and Samwoh Corp – had bids of $185 million and $193.7 million, respectively.

Workers’ Party Non-Constituency MP Daniel Goh asked if contractors who expect to score poorly for safety will lower their bid price “to an unrealistic level… risking further safety lapses”, and whether a review of the price-quality method was therefore necessary.

Dr Lam said the LTA “does not bar contractors which have safety lapses or are blacklisted” from participating in tenders.

“Their quality envelopes will still be opened and assessed objectively and any safety lapses will then be penalised under the safety component accordingly,” he said, adding that LTA board members can veto decisions on the basis of poor safety. The board has vetoed 16 bids from 10 companies for poor safety.

He also told Ms Cheryl Chan (Fengshan) that the main contractor will ultimately be held responsible for any safety lapses, including by its sub-contractors.