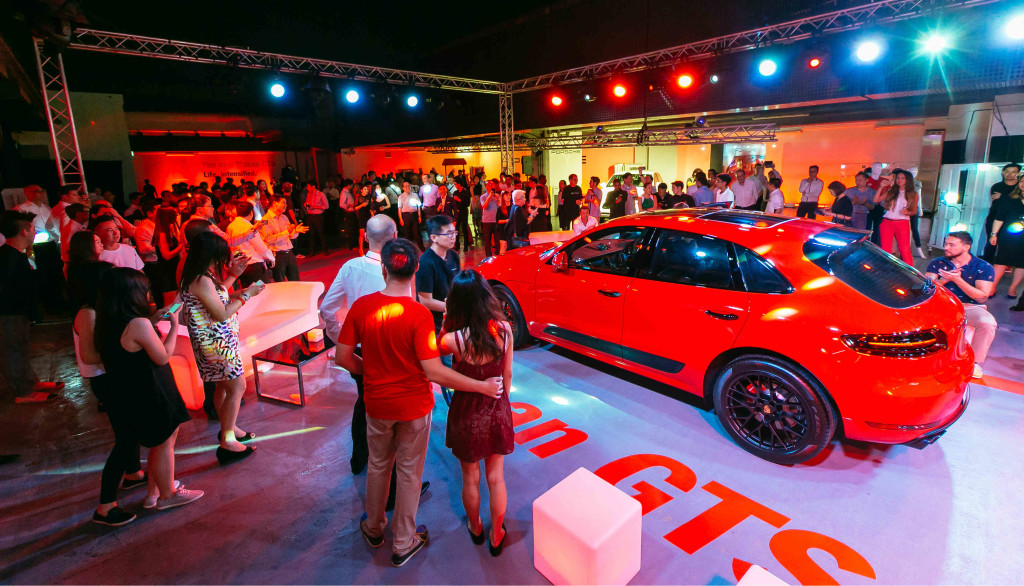 Porsche launched the new Macan GTS on 11 May 2016 at an outdoor evening event held at the rooftop terrace of Porsche Centre Singapore.

The Macan was the first sports car in the compact SUV segment. Since its local launch in July 2014, more than 600 Macans have been delivered to customers. Porsche is set to extend the success of this popular model range by unveiling another exciting variant – the Macan GTS.

The newcomer has been engineered to be the ultimate urban sports utility vehicle, which is not just practical and spacious but also fun and exciting to drive. Its highly efficient 3-litre twin-turbo V6 engine produces 360bhp and 500Nm. The energetic new Macan GTS is capable of sprinting from zero to 100km/h in 5 seconds flat with the Sport Chrono Package, and can reach a top speed of 256km/h.

The 7-speed Porsche Doppelkupplung (PDK) dual-clutch transmission comes as standard, as does the sport exhaust system with black tailpipes, which produce a particularly resonant sports-car sound every time the driver steps on the accelerator. Also standard in the Macan GTS is Porsche Active Suspension Management (PASM), which actively regulates damping force based on the changing conditions of the road as well as the driving style. The tuned suspension, which is 15mm lower than that of the Macan S, deepens the connection with the road beneath.

On the exterior, the 20-inch RS Spyder Design wheels in Satin Black, the standard SportDesign package with an imposing front apron and side skirts as well as matt black air intake grilles, sharpen the dynamic appearance of the Macan and emphasise its athletic stance.

On the interior, the eight-way electric sports seats and exclusive GTS leather package with luxurious Alcantara complete the sporty look and feel of the cockpit.

“The Macan is built for those who want to experience a life full of fervour and intensity. The new Macan GTS is built for those who want to go one step further and experience the sheer driving pleasure of a sports car in the SUV segment. One should expect nothing less from a Porsche that bears the GTS insignia — outstanding sporting character, effortless and powerful agility, and a striking silhouette that is instantly recognisable as a Porsche. The new Macan GTS is versatile, practical, and the very embodiment of the urban sports car,” said Mr Karsono Kwee, executive chairman of Eurokars Group.

We compare the Porsche Macan 2.0 against the Audi Q5 2.0 and Land Rover Range Rover Evoque 2.0.

We road-test the Porsche Macan S.